This week sexting photos of Anthony Weiner were released on the Internet… again. The disgraced congressperson running for mayor of NYC dominated the news cycle while at the same time Robin Thicke’s song Blurred Lines sat at the top of the Billboard Hot 100. In this piece Nathan Palmer uses both of these situations to give us a chance to “flip the script” and look at how social context affect how we understand any situation. 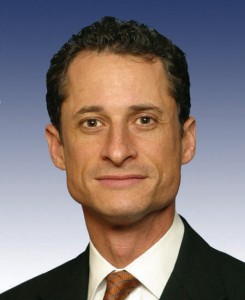 Sociology often hides in plain sight. One approach to bringing it into view is to see the familiar as strange which we discussed last week. Another strategy is to “flip the script”. That is, take any situation and imagine how it would be different if it had happened to a person of a different race, class, gender, sexual orientation, religion, etc. or imagine if it had happened in another place or at another point in history. I have a couple of examples of script flipping to share with you, but first we should ask the sociological question: Why does this technique work in the first place? The answer is social contexts.

A context is the surrounding circumstances that help you understand a person, an action, or a situation. If I told you I punched a guy last Thursday you might be alarmed. However, if I told you that I mashed a dude’s face because he was attempting to kidnap my daughter, you’d probably not be alarmed because in the context of an attempted kidnapping violence is widely thought of as warranted.

END_OF_DOCUMENT_TOKEN_TO_BE_REPLACED

Seeing The Familiar As Strange at Pitchfork Music Festival

You are a strange person living in a strange world. It’s just that you are so much like all the people around you and each day is so much like the next that you slowly come to think of yourself and the world around you as normal. However, part of being a good sociologist is remembering just how strange our everyday world is. In this piece Nathan Palmer goes to the Pitchfork Music Festival to show us how different things look when we “see the familiar as strange”.

Do you know how you can spot a tourist from a local? Tourists look up, taking in the scenery, but locals stay heads down until they get to where they’re going. I am in Chicago this weekend for the Pitchfork Music Festival, so the tourist/local divide is as clear as ever for me. Every time I stop to marvel at some landscape, or look at a sculpture, or especially when I snap a picture, the locals who I share the sidewalk with either roll their eyes or give me a strange look. To the locals there is nothing remarkable- nothing worth looking at, because they’ve seen it a thousand times before. Locals may have more insider knowledge of the area than anyone, but so much of the world they live in has become so familiar that it is now unremarkable and just normal.

Seeing The Familiar As Strange

Sociology asks you to look at your life, your community, your world again for the first time. As a discipline we urge you to “see the familiar as strange”. Become a tourist in your own life, and notice all of the little details that have faded into the background. In many ways sociology is the study of human patterns of behavior. Put another way sociology is the study of the (often boring) routines of life.

The lessons that sociology has to teach you and the answers that sociological methods can provide you lie in the things you’ve always known were true, the assumptions you didn’t even know you were making, and the questions you never thought to ask. This isn’t a mantra or Chicken Soup For The Sociologist’s Soul it’s an approach and an opportunity for you to more deeply understand the world around you.

I thought I’d take you along with me as I roamed the music festival this weekend and show you how I “see the familiar as strange”. Now mind you, a concert is not an everyday thing, but it is highly routinized. Walking around Pitchfork I saw many things that would be familiar to anyone who’s been to a concert before. There were far too many things to sociologically analyze, but I want to at least tell you about three of them. 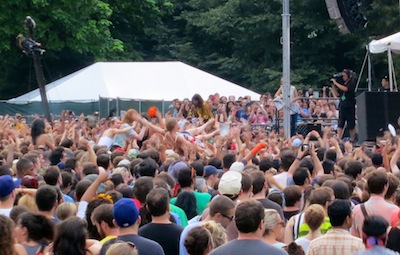 In any other place, running head long into someone else is called assault. At a concert it’s called fun. END_OF_DOCUMENT_TOKEN_TO_BE_REPLACED

Posted by Nathan Palmer under Concerts, Familiar as Strange, Sociological Imagination, Think Like A Sociologist

We Live in Many Americas

The Internet exploded Saturday night when George Zimmerman was found not guilty of murder. Social media became a battle ground for people on both sides of the issue. For many, Zimmerman’s acquittal is further evidence that the legal justice system is biased against people of color. To his supporters, Zimmerman was persecuted because he was the victim of a “politically correct” racially motivated witch hunt. In this piece Nathan Palmer uses his experiences as a white man and the reaction to the Zimmerman case to invite you to think about how your race affects your perceptions of the world. 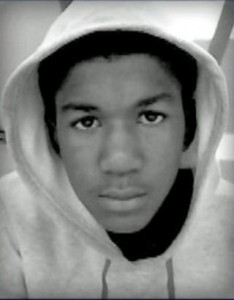 Saturday was a hard night to be on social media once George Zimmerman was found not guilty of murdering Trayvon Martin[1]. Scrolling through my social media feeds I saw such starkly different responses to the verdict. A tweet of outrage sat above one of elation. A status update praising the jurors for their decision was followed by another decrying the miscarriage of justice. Many of the posts I read argued that this verdict was another example of how racially biased the criminal justice system is. Others argued that this whole thing was just an example of what one of my friend’s friends called “mass reverse discrimination”.

As I laid down for bed I was an emotional mess. Not able to sleep, I turned on my phone and read one last Facebook post from an African American friend of mine:

“We live in many Americas. Mine doesn’t look like yours.”[2]

That was it. That was what I wanted to tell you. I closed my eyes knowing I was going to write about how our varied social locations create many world views and many Americas.

Social Location & Worldview in a Nutshell

Who you are affects how you experience and come to understand the world around you. That’s the gist of what sociologists are trying to communicate when we discuss social location and worldview. Your Social Location is the collection of social demographics (race, economic class, gender, education, sexual orientation, etc.) and how those relate to the rest of your community. If you are one of many in your community (for instance a heterosexual person) you are treated differently than if your social location is more uncommon (i.e. you are a social minority). Your Worldview can be thought of as the assumptions and biases that shape the way you come to understand the world around you. Your worldview comes largely from your experiences.

There is fairly ample evidence to suggest that people of color and African Americans in particular are more likely to be targeted by police, prosecuted more often, punished more severely when found guilty.[3] For instance let’s look at the War on Drugs. Despite the evidence that suggests drug use is remarkably similar across all racial ethnic groups (see for instance), people of color and specifically African Americans are imprisoned at much higher rates for all drug related offenses.[4] In 7 states African Americans represent over 80% of all drugs arrests, which is particularly remarkable in Illinois, New Jersey, and North Carolina where the Black population represents only 15%, 15%, and 22% of the states total population respectively. If 15% of the population accounts for over 80% of the arrests and there isn’t a huge difference in drug use, then what are we left to conclude other than racial bias in the criminal justice system?

END_OF_DOCUMENT_TOKEN_TO_BE_REPLACED

On the Menu: Fried Cicadas, Hummus, and Guacamole

Bugs. They’re what’s for dinner? The foods we eat are a product of our culture and as our world becomes more interconnected we have seen the delicacies of one culture spill over into another. In this post, Stephanie Medley-Rath defines this process as cultural diffusion and explains why she just might serve fried cicadas at her next dinner party. 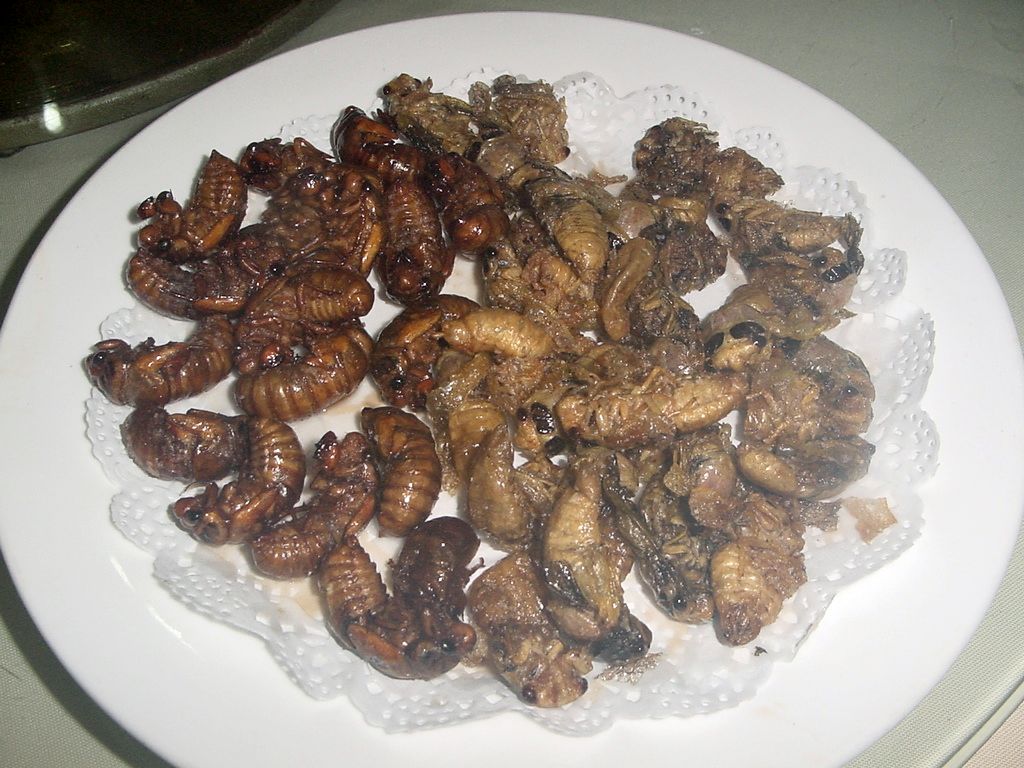 A feature of culture is that it varies across time and space. Think about it. The clothing that you wear as a young adult probably looks a bit different than what your grandparents wore as a young adult. Food, like clothing, is a cultural artifact and what counts as food varies across time and space. Along with your clothing, the food you eat probably differs from the food people in other cultures eat and perhaps deviates from what your grandparents ate when they were your age. For example, I never ate guacamole until I was an adult and have since introduced it to my 90-something-year-old grandmother.

Today, guacamole is quite commonplace and no longer “exotic.” Hummus, is another example of a once “exocitc” food for Americans, yet is increasingly popular. Hummus originates in the Middle East and its popularity has spread to the United States. The process of cultural products (e.g. foods, clothing, music, etc) gaining popularity in one region and then spreading around the world is known as cultural diffusion. As foods and other cultural products diffuse into a new region they can quickly go from being “exotic” to being “ho-hum”. END_OF_DOCUMENT_TOKEN_TO_BE_REPLACED

AMC’s “Mad Men” premiered in 2007, highlighting the lives of 1960s-era advertising men and women working on Madison Avenue. The series revolves around ad guru Don Draper, a heroic figure with ruggedly handsome looks who has a sixth sense about advertising (and women). In this post, Ami Stearns suggests that Don Draper exemplifies one of Max Weber’s ideal leadership types, the charismatic leader.

For research purposes only, I just finished playing the quiz “Which of Don’s Women Are You?” on the official Mad Men website (FYI: I’m Allison, Don’s one-time secretary and one-night stand). Love him or hate him, Don Draper is the larger than life face of AMC’s Mad Men.

You’ve heard of Mad Men, right? The period drama, which just wrapped up its sixth season, has set a record for basic cable television shows by winning an Emmy four years in a row. The highs and lows in the bedrooms and boardrooms of the NYC advertising execs have created legions of fans over the past six years, spawning a Wall Street Journal weekly blog, the requisite official merch, and even games.