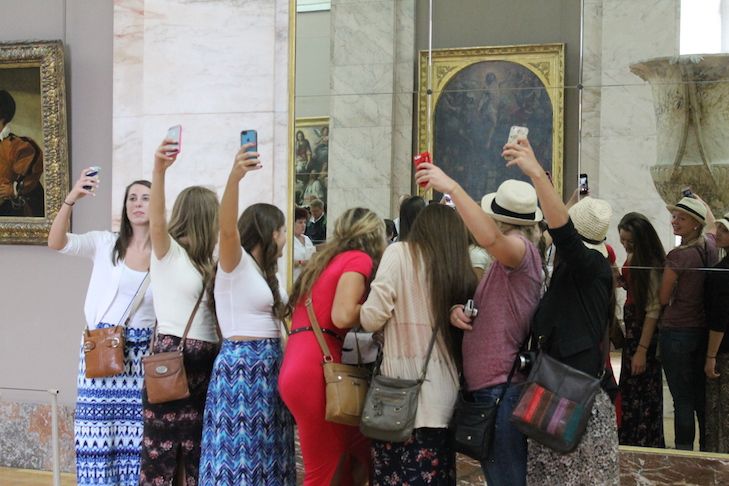 A Sociologist Visits an Art Museum: Race, Art, and Selfies

When a sociologist visits an art museum, what do they see? In this instance, Stephanie Medley-Rath connects the racial composition of the place to the artwork on display and the photography behavior of the patrons. In particular, what are the norms of selfie-taking?

I recently visited the Art Institute of Chicago. I went with the purpose of seeing the Van Gogh’s Bedrooms exhibit. While the Van Gogh exhibit was interesting and very crowded (too crowded to be enjoyable IMO), I also explored some of the other highlights of the museum. I did not tour the whole museum due to limitations on time and the stamina of the seven-year-old with me. My observations are limited to only those exhibits I saw on a Saturday afternoon Easter weekend of 2016.

One thing that immediately struck me at the art institute was how race mattered in the museum space. Among the visitors, I saw a sea of mostly white faces and bodies. Among the museum protection staff (i.e., security officers), I saw nearly all black faces and bodies. The museum protection staff are to remain mostly invisible. They are there to protect the art. They are quick to gently remind visitors to not use flash photography or stand too close to the art. Otherwise, they stand in place and do not interact with the patrons. The racial composition of those working in the museum and those visiting the museum was similar to my observations at a St. Louis Cardinal’s game in 2012. In other words, it is hardly noteworthy because the racial difference between those who are serving and those being served is normative in cities that are highly racially segregated like St. Louis and Chicago (which is the third most segregated city in the nation).

While this post could explore the juxtaposition of some of the artwork with the patrons and MPS, I would rather bring the emphasis around to photography behaviors in this space. Further, I am writing under the assumption that if a piece is in an art museum, then it is art regardless of if it depicts black suffering for the benefit of white consumers. These are important considerations, but beyond the scope of my thousand words.

So let’s talk about Andy Warhol’s piece, Little Race Riot. The piece is part of The Race Riot series, which “reproduced 1963 press photos depicting police dogs attacking civil rights demonstrators in Birmingham, Alabama.” Yes, you read that right, it depicts police dog brutality rather than police brutality. What does it mean to have artwork depicting black suffering for the benefit of white consumers under the guardianship of black museum protection staff? Little Race Riot was made in 1964, but the photos could be from today’s newspapers. The piece reminds viewers that the past really isn’t all that distant and perhaps we have not come as far as we like to think we have (though Warhol had no way of knowing any of this). While the contemporariness of the subject is important to consider, I want to focus on the photography behavior of patrons around this piece within this context.

We live in the age of the selfie. There was one 20-something white woman taking selfies of herself in front of various artworks. I observed her as she posed in front of several, including Little Race Riot. She barely paused to even look at what she was photographing. Her behavior implied that her goal was engaging with the artwork through selfies rather than in other ways. The selfie provides proof that she “saw” Andy Warhol’s work. A person could steal a photograph of the work online and claim they were there, but real proof is if you are in the photo, too. The problem, however, is that the selfie is not really engaging with the art. It is using the art as a backdrop in one’s online identity (assuming that the selfie is destined for social media). This particular use of a selfie raises many sociological questions:

To take a selfie in front of artwork means that others can not. They can not take a selfie in the same time and space. Whereas, taking a photo of the art alone means that other people can also take photos of the art alone and they can view the art unobstructed regardless of their photographic intentions. Selfies obstruct other people’s views in the present and direct their views in the future (when viewing the photograph). Selfies appear to be about the individual, but are shaped by larger social forces.