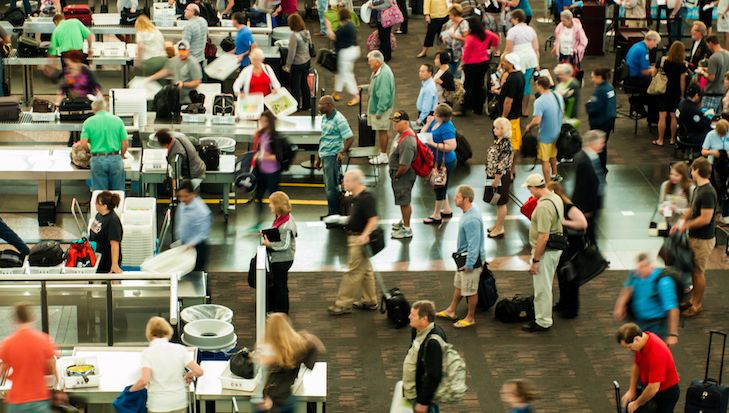 In this piece Nathan Palmer uses two recent panics at airports in New York and Los Angeles to illustrate how social phenomena spreads in non-linear ways.

Two weeks ago there was a mass shooting in New York City at JFK airport, at least for a little while, and it barely received one day’s worth of attention from the news media. At 9:30pm on August 14th, a woman called 911 to report gunfire in terminal 8 of JFK airport. Within minutes there were stampedes of people in two separate terminals. People poured out of the airport and onto the tarmac. Police officers with weapons drawn ran through screaming for everyone to get down or to leave their luggage and run for their lives. Some 25,000 people inside the airport survived a nightmare two weeks ago, and it barely made a blip on the national news.

Hours after the 911 call, authorities concluded that no shots had been fired. Instead, they hypothesized that the gun shots the caller heard were actually the sounds of fans celebrating Usain Bolt’s Olympic victory in the men’s 100 meter event in a nearby bar.

And then it happened again last night in Los Angeles at LAX.

The details from last night’s incident at LAX are still coming in, so for this discussion I will primarily focus on what happened at JFK.

Panic as an Emergent Phenomena

Phenomena are disruptions that ripple through things. Last week, we looked at waves going through water and stadiums full of people to illustrate this point. Today, I want us to examine how panic can spread through a network of people like an emotional contagion.

Imagine that we could hover above JFK airport, see through the roof, and see each of the approximately 25,000 people present that night as a dot. Now imagine that we could see a line connecting every individual person with every other person they had a relationship to. From this vantage point we could easily spot small networks of families, friends, co-workers, and other groups traveling together. We would also see lots of isolated dots representing the people traveling alone. Taken together, all of these dots and lines represent the complex social network of relationships between travelers at JFK that night.

If we could’ve watched from our imaginary vantage point above the airport that night, we would have seen individuals and groups flip from a calm state to a panicked state. But, how would the emerging panic look? The 911 caller is patient zero in this emotional contagion, so we can deduce that she would be among the first dots to flip to a panicked state and seeing her panic would lead others nearby to also flip. This is spread through the network is referred to as linear because, like a row of dominos falling, the change in one person spreads to another near them and so on down the line. However, emergent phenomena are by definition non-linear.

Emergent phenomena are described as nonlinear because they occur in multiple locations simultaneously. The 911 caller was one point of emergence, but other locations in the airport people were receiving the news of shots fired via social media, messages from concerned loved ones, etc. As each of these individuals panicked, some of those around them also flipped states. Thus, the panic at JFK, like all emergent phenomena spread in both linear and nonlinear ways.

Reality as an Emergent Phenomena

It’s tempting to think that what happened at JFK two weeks ago and LAX last night is nothing more than a false alarm. However, for the people who lived through that nightmare, it was all too real. Had any of the interactions between police and the 25,000 people at the airport gone wrong, people may have been shot and killed. Furthermore, as a parent, I can’t even imagine what the children in the airport that night must have gone through. For the people at JFK and LAX, it was real, until it wasn’t.

The Thomas theorem posits that, “situations defined as real are real in their consequences.” As news of an active shooter spread and panic ensued, travelers, airport staff, and police learned first hand how reality is socially constructed. Every second of the day we look to those around us for information about what’s going on. We turn to the news media and social media to decipher what’s going on. We rely on authorities like the police to make sense of the events unfolding around us and we follow their directions in hopes that it will keep us safe from harm. Our sense of reality emerges from our interactions with this complex network of individuals and groups. Even if later we learn that it was a false alarm, that doesn’t change how real the panic felt in the moment.