Advertisers Needed A Hero “So God Made a Farmer”

Dodge Ram paid tribute to the American farmer in their ad that played during the Super Bowl last week.

Dodge resurrected Paul Harvey’s 1978 ‘So God Made a Farmer’ Speech for the commercial. It certainly got my attention. I was otherwise distracted and paid attention to the TV when I heard what sounded like an old man’s voice talking about God and farmers. 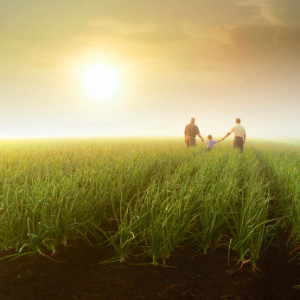 “And on the 8th day, God looked down on his planned paradise and said, ‘I need a caretaker.’ So God made a farmer.”

The image of farmers and farming portrayed by Dodge Ram fits neatly into our narrative of the American family farm. Farmers as caretakers, however, stands in stark contrast to industrialized farming. The farmers as caretakers trope is nothing new. In Food, Inc., Michael Pollan points out how marketers regularly rely on our nostalgia for the family farm in selling food products and now it appears this same nostalgia is being used to sell trucks. Dodge Ram presents the image of farming as a noble calling and it may be, though this nostalgic view of farming hides the realities of modern day farming.

The farmers portrayed in the commercial were almost all white men working as individuals. The 2002 Census of Agriculture reports that 62.3% of farmers have one operator, but the rest have multiple operators. Even individual operators have employees. In other words, farmers work not as rugged individuals but part of teams.

Approximately five women or girls were portrayed in the commercial. Women were portrayed in gender typical ways as assistants to or family to the farmer and only rarely as the farmer. In multiple operator farms, 65.4% have a male principle operator and female second operator (many will be husband and wife). In other words, there are large number of women heavily involved in farming operations though viewers would not know this based on the commercial.

In terms of race, all the people in the commercial were white, except one farmer was a black man. Others note the absence of Hispanics in the advertisement despite making up a large portion of farm workers. By far, the majority of farm operators are white, so the commercial does accurately portray the typical race of farm operators. Black farmers, however, have historically been denied loans by the United States Department of Agriculture(though a settlement was reached). This discrimination on the part of the USDA has greatly shaped how Americans perceive farmers by limiting the type of people who can become and stay farmers, which shapes how farmers are portrayed in a commercial.

Finally, farmers were portrayed as family-oriented and farming is at least somewhat a family affair. The family farm is a cultural icon despite few Americans having any connection whatsoever to a farm. Very few Americans are farmers or even live on farms. About 1% of Americans consider themselves farmers and about 2% of Americans live on farms according to the U.S. Environmental Protection Association. The family farm is also used as a political tool. It is almost always mentioned in the same breath as “estate taxes” or “death taxes” as a reason for not taxing estates. The reality is that “less than 50 farms and family-run businesses were required to pay the estate tax in 2011, and only 40 will owe any estate tax in 2012” as reported by CBS. In other words, the family farm is held up as the reason to eliminate estate taxes.