#ashtag: The Sacred and Profane of Lent

The season of Lent has become popular among the non-religious population and has gained steam this year with the help of social media. From last week’s hot trending tweet of #ashtag to smartphone apps that help with Lent, the ancient practice begs a more modern, sociological interpretation. In this post, Ami Stearns discusses the sociological reasons behind participation in Lent. 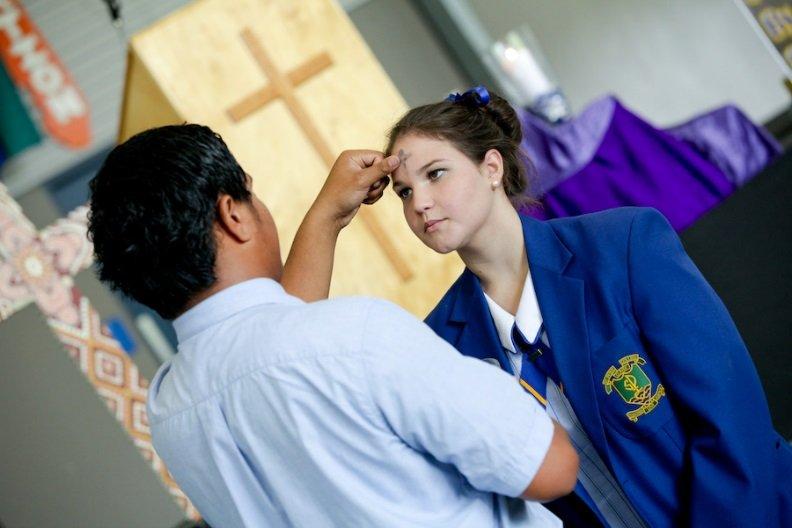 Did you catch all the ash selfies on Twitter on last week? The Twittersphere blew up March 5th and 6th with the hashtag #ashtag (get it?). #Ashtag posts featured a selfie of the tweeter’s forehead ash. That now-famous Oscar picture taken by host Ellen DeGeneres was even altered to promote the hashtag. In case you didn’t know, Ash Wednesday marks the beginning of Lent season for Christians who identify mainly with the Catholic faith. During the Ash Wednesday ceremony, the pastor or priest marks parishioners’ foreheads with ash in the form of a cross to signify penance, humility, and mortality.

This year, Lent began on March 5th and will end on April 17th. It’s a 40-day period of observation, self-reflection, and sacrifice that has been observed since as early as the 3rd century C.E. (some argue 5th century C.E.). In the Catholic tradition, Lent is typically marked by fasting or abstaining from certain foods. While a uniquely Christian observation, Lent has been “co-opted” by more and more people, including those outside of the Catholic faith, former Catholics, and even non-believers. In fact, the opportunity to try out a 40-day resolution appeals to nearly everyone (how long did your New Year’s resolution last anyway?). So how can we use sociology to explain the secularization of Lent?

Social media is playing a strong role in this year’s Lent. If you weren’t in on the #ashtag phenomenon, maybe you’ve had your Facebook feed clogged with people’s intentions for Lent. I’ve seen people cutting out certain food groups, giving up complaining, and logging off social media for 40 days (after proclaiming it on social media, of course!). Some people are using the Lent observation to begin a new habit, like writing a daily blog post or being thankful every day. If anyone needs help getting through Lent – there’s an app for that!

I was raised in the evangelical Protestant tradition and never even heard of Lent until I was in my twenties. The idea of a religious ritual that united people across the globe in a period of doing without a luxury seemed like a great idea, especially in a culture where we have more than we need. One year I gave up sugar, another year chocolate. The last time I participated in Lent, I sacrificed listening to the radio. Those were not happy times (this year, I gave up worrying about Lent for Lent).

The Sacred, The Profane, & Lent

In a 1912 book, The Elementary Forms of Religious Life, sociologist Emile Durkheim wrote about the sacred and the profane and their relationship to religion. Religion, Durkheim argued, is defined as a system of beliefs and practices related to sacred things- those that have been set aside and are separated from individualistic, worldly concerns. The practice of Lent fits in this definition. Profane is not necessarily evil, it’s just anything that is outside of the sacred space. The fact that Lent has caught on in the secular world is a good example of the sacred and the profane colliding. Let’s think about why Lent would appeal to nonbelievers.

Social media has brought Lent to the forefront of the public imagination, especially this year. It remains to be seen if Lenten practices will become as secular as Christmas.