The Rice domestic violence case brought physical domestic violence (DV) to the spotlight. But there is so much more to DV than what this case highlights. In this post, Bridget Welch interviews Diane Mayfield (the director of a victim’s center in my community) to explore some of what has been missing from the coverage.

Besides writing for this blog and being my professory self, I also volunteer as a hotline advocate for the local center for interpersonal violence (covers sexual assault, domestic violence, and stalking). While I had a lot of reactions to the Rice domestic violence (DV) case that are probably different than a lot of people because of that experience, I struggled with what I wanted to focus on for a post discussing the case. I decided that enough people are actually discussing the case online, who needs another voice? Instead, I sat down with Diane Mayfield (director of the Western Illinois Regional Council-Community Action Agency (WIRC-CAA) Victim Services Program where I volunteer) to discuss what we hope the national attention to DV will teach us.

1. Domestic violence is not just physical.

Taking hotline calls and with the research I do on sexual assault, I hear a lot of reports of different types of domestic violence (sexual violence is frequently a component of DV). In one instance I talked to a woman who had been repeatedly raped by her boyfriend (justified by her causing it by “making” him feel jealous) who felt like she couldn’t leave 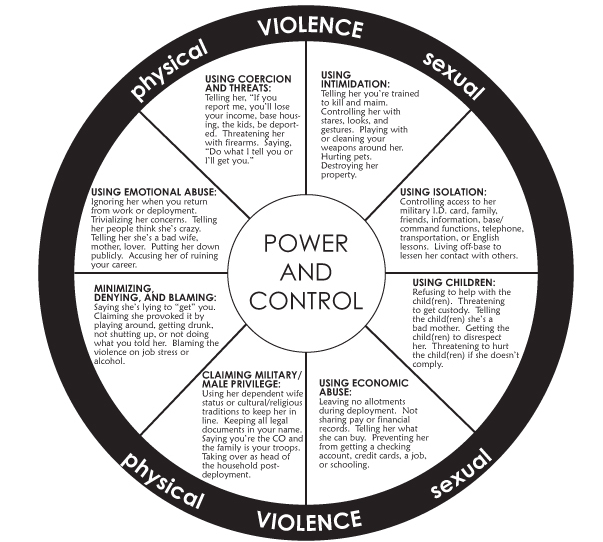 him because he had systematically made her drop all of her friends and even cut her off from her parents. In another situation, I talked to a man whose ex-wife was demanding he do what she wanted or she would not let him see the kids. In another, a woman calls in tears trying to figure out how she could get away from her partner who constantly belittles her and makes her feel bad about herself. But she didn’t know how to because she had given up her job to take care of the kids and now had no money.

Diane points out that when you ask someone “what DV is, they just say it is physical violence.” But, the truth is, physical violence like what occurred in the Rice incident is just part of DV (in fact, for all we know, it’s just part of the abuse Janay faced). The Power & Control Wheel developed by the Domestic Abuse Intervention Project in Duluth, Minnesota shows all the way that domestic violence can occur — including what we saw in the three examples I used above — using children, shifting blame, verbal assault, economic control, and sexual abuse. In fact, while often people (including court officials like judges and police) take physical DV more seriously, other types — particularly economic (see the purple purse campaign) — make it harder for a victim to leave. And, as Diane points out, her clients often say it’s verbal abuse that is the worst. “Bruises and bones heal. It’s the verbal abuse and mental abuse that sticks. It gets in your head and won’t leave.”

The core of DV is any method that allows one partner to attempt to maintain power and control over the other. That’s right, one partner over the other. Not a man over a woman only. While 85% of victims are women, men are also victims. Further, DV occurs in all types of relationships between all different types of partners. Married, dating, formerly together, just having a kid together, same sex… the list goes on (and legally varies by state).

2. The victim is the expert on her abuser’s behavior — not you!

After the video got released, there was a lot of discussion of what Janay did or did not do. Did she hit him first? Did she spit on him? Was she giving him a hard time, asking for it? I really hope that you already know that no one is asking to be a victim of DV. As Diane pointed out, “we don’t know exactly what was happening because we didn’t have any sound. We are only seeing part of the story.” Regardless of what she said or did, “he still had the chance to walk away. To step back.” But he didn’t step back.

Whatever a victim does or does not do occurs in a relationship where she has very little power or control. It has been taken from her. If she hits first, it may have been an attempt to take some power over the situation. Indeed, hasn’t an abuser taught her that is what control looks like in this relationship? Perhaps her hitting him before has stopped an attack. Another possibility is darker. A lot of times the victim knows an attack is coming. The tension builds and builds. Diane has talked to clients where they induce the attack to: (1) get it over with; or (2) hopefully reduce how badly she’ll get injured. The truth is, unless you are in this relationship, you do not understand all the dynamics. What we do know is that the victim is just that — a victim. Not the person to blame, regardless of behavior immediately preceding an abusive event.

3. Domestic violence IS your business.

Diane works extensively with young adults on issues related to dating and notes that a lot of them “think that violence — whether physical, sexual, or verbal — is a normal part of a relationship.” Any relationship that contains any elements of the power and control wheel — no matter who is controlling and who is being controlled — is an abusive relationship.

As someone who works with victims of domestic violence and sexual assault, I was very upset when the video of the attack was released when Janay did not want it to be. The reason? She is an abusive relationship where her partner seeks to control her. Making the choice for her to release that video is further taking away her control. It is a form of victimization. Watching that video is participating in her revictimization. The only way to salvage this is to make something positive come out of it. Diane says that one of the biggest roadblocks to doing something about domestic violence is that a lot of people think it’s none of their business. “People say, I’m not my brother’s keeper! Well, actually, you are. Whose to say that next time it won’t be your sister, your daughter, your coworker, your friend that becomes a victim? It’s everybody’s responsibility to get educated. To not be a “bystander, but a stand upper!” We all need to make sure that we stay with this beyond the “shock and awe” of the initial coverage. Get educated and participate in the solution.