If you look hard enough, or get good at it, sociological theory can be found in the everyday. In this post, Ami Stearns explains how audience and panel members at a public forum about crime used language reflecting criminological theory to address issues between the police and the African-American community. 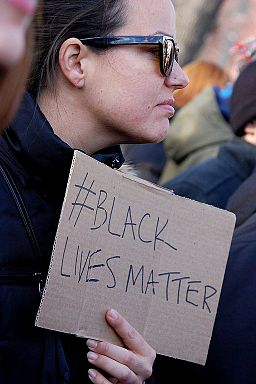 One of the hazards of being a professional sociologist is you can’t stop seeing social theory everywhere you go. For example, I recently attended a #BlackLivesMatter public forum and heard criminology theories in almost everything the panelists and forum attendees said. The forum was a response to the police shooting deaths of unarmed African-American men and the protests that followed in Ferguson and other cities. The discussion quickly turned into a debate on how to best address crime in the African-American community and thereby avoiding conflicts with the police altogether.[1]

By far, the most common theme running through all of the comments were built on a criminological theory called Social Control. This theory, as postulated by Gottfredson and Hirschi in the 1960s, places the responsibility for socially acceptable behavior on parents, teachers, and other authoritative figures. According to Social Control theory, adherence to social norms begins in infancy and childhood and is reinforced through socialization. Here are some Social Control theory examples from the public forum:

These Social Control arguments pointed to a belief that morals, values, and discipline taught early in life by parents, teachers, and religious leaders would lead to citizens who essentially adopted non-criminal behaviors.

The second most popular response at the forum carried a definite Chicago School/Ecological Theory undertone. One of the first U.S. departments of sociology emerged at the University of Chicago, and this group of researchers (Burgess, Park, Shaw, and McKay, most notably) theorized that it was the “type of place” that mattered in reproducing crime. Disorganized neighborhoods, neighbors who did not know one another, and decrepit buildings were just a few of the factors leading to increased crime. Here are some examples of statements that reflected a Chicago School type of response:

These statements reflect a belief that the problem of crime is best addressed by organized neighborhoods- meaning communities where people know one another, keep their properties pleasant-looking, and spend time together.

The third most common response I heard at this public forum illustrated Strain Theory. Based on Durkheim’s work, Strain Theory was popularized by Robert Merton. According to Merton, American society is structured in a way that leads some groups to experience frustration and strain when they try to obtain valued goals. Those that can’t achieve financial success through legitimate means (education, inheritances, or/and working at a white-collar job, for example) may commit crimes to try and gain financial success.

I saw the statements above as echoes of the theorizing done by Merton. Our society is set up to reward those who are born advantaged, but claims that all can succeed through hard work. Many of us know that this simply isn’t true . Audience members and panelists believed that financially-secure households would curb crime.

Although the forum as a whole never directly addressed racial issues between communities and police, it was interesting to hear how the attendees theorized why crime happens and how to stop it.