In this post, Mediha Din explores what a hate crime is, types of hate crimes, and sociological explanations of prejudice.

On the evening of February 10th, calls started coming in to police of shots fired in a neighborhood just off of the University of North Carolina in Chapel Hill. When police arrived, Craig Stephen Hicks was arrested for allegedly shooting and killing Deah Barakat, Yusor Mohammad, and Razan Mohammad Abu-Salha (all of whom were Muslim Americans). Police believe Hicks was angry about an on-going parking dispute. The victims’ family members however, feel that the murders should be investigated as a hate crime. According to CNN, Craig Hicks has a history of parking disputes with neighbors. He also allegedly identified himself on Facebook as an atheist and ridiculed different religions, including Christianity and Islam.

From a sociological point of view, a hate crime is an unlawful act of violence motivated by prejudice or bias. It is a crime that in whole or in part is connected to hatred of a particular group. According to the FBI, a hate crime is “a traditional offense like murder, arson, or vandalism with an added element of bias.” The bias can be based on race, ethnicity, religion, sexual orientation, disability, gender, or other factors.  If a crime is determined to be a hate crime, the punishment can be more severe. Mark Potok, a senior fellow at the Southern Poverty Law Center, explains that it can be difficult to prove a hate crime because there is often no evidence of a criminal’s motive or state of mind. Potok also notes that not all states have laws protecting the same groups from hate crimes. Some states for example, do not prosecute a hate crime based on sexual orientation.

Why Do People Commit Hate Crimes?

Motivations for hate crimes can vary, but they are often categorized into three groups using a typology created by Levin and McDevitt (1993) that has since been expanded (e.g. McDevitt, Levin, and Bennett 2002). 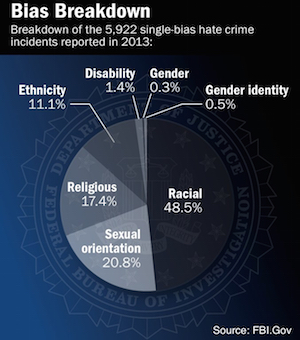 Cultural Transmission Theory: states that prejudice is transmitted through culture from generation to generation through family, peers, and media. Children learn stereotypes from their surroundings and grow up with prejudice.

Group Identification Theory: states that prejudices are tied in with an individual’s group memberships. According to this theory, groups come together based on common backgrounds and interests, but pride in their own group can become excessive.

Personality theory: states that those with authoritarian personalities have higher tendencies of holding prejudice beliefs.  This includes people with very rigid views, those who are uncritical of authority, preoccupied with power, or raised by excessively harsh parents. Their close-minded characteristics can lead to intolerant views of other groups.

Frustration-aggression hypothesis: states that prejudices develop in response to a person’s need to cope with the frustration in their daily lives. Certain groups can become scapegoats for an individual’s frustrations in life.

The Case Against Craig Hicks

In the case of Craig Hicks, police in North Carolina have searched Hicks’ computer but do not believe they have sufficient evidence to prove a hate crime. On what is believed to be Hicks’ Facebook page, an unverified post that has been attributed to him states “When it comes to insults, your religion started this, not me. If your religion kept its big mouth shut, so would I.”

The father of two of the victims believes his daughters’ hijabs (head scarves that would likely identify them as Muslims) fueled the dispute. “Daddy, I think he hates us for who we are,” Abu-Salha said his daughter Yusor Mohammad had told him after moving into the condominium complex. According to CNN, Deah’s Barakat’s brother, Farris Barakat, said Hicks had repeatedly harassed Deah about parking rules. Deah checked with the condo office more than once, and was assured Deah was following the rules. “They gave him the clear and said, ‘If Mr. Hicks bothers you again, please call the police.’” Hicks has yet to be charged with a hate crime, but the prosecution has made it clear they will seek the death penalty.