To Coup or Not to Coup, That is the Question

Have You ever see a kid stick her fingers in her ears and yell “LA LA LA” at the top of her lungs to keep herself from hearing her parents tell her to do something she doesn’t want to do? In this post Bridget Welch explore how what the United States is doing about the recent uprising in Egypt is kinda like that.

Nathan Palmer recently wrote about the turmoil in Egypt. After explaining what happened when the first democratically elected president Mohamed Morsi was arrested by the Egypt military, Nathan points out that there are many ways to sociologically analyze the events in 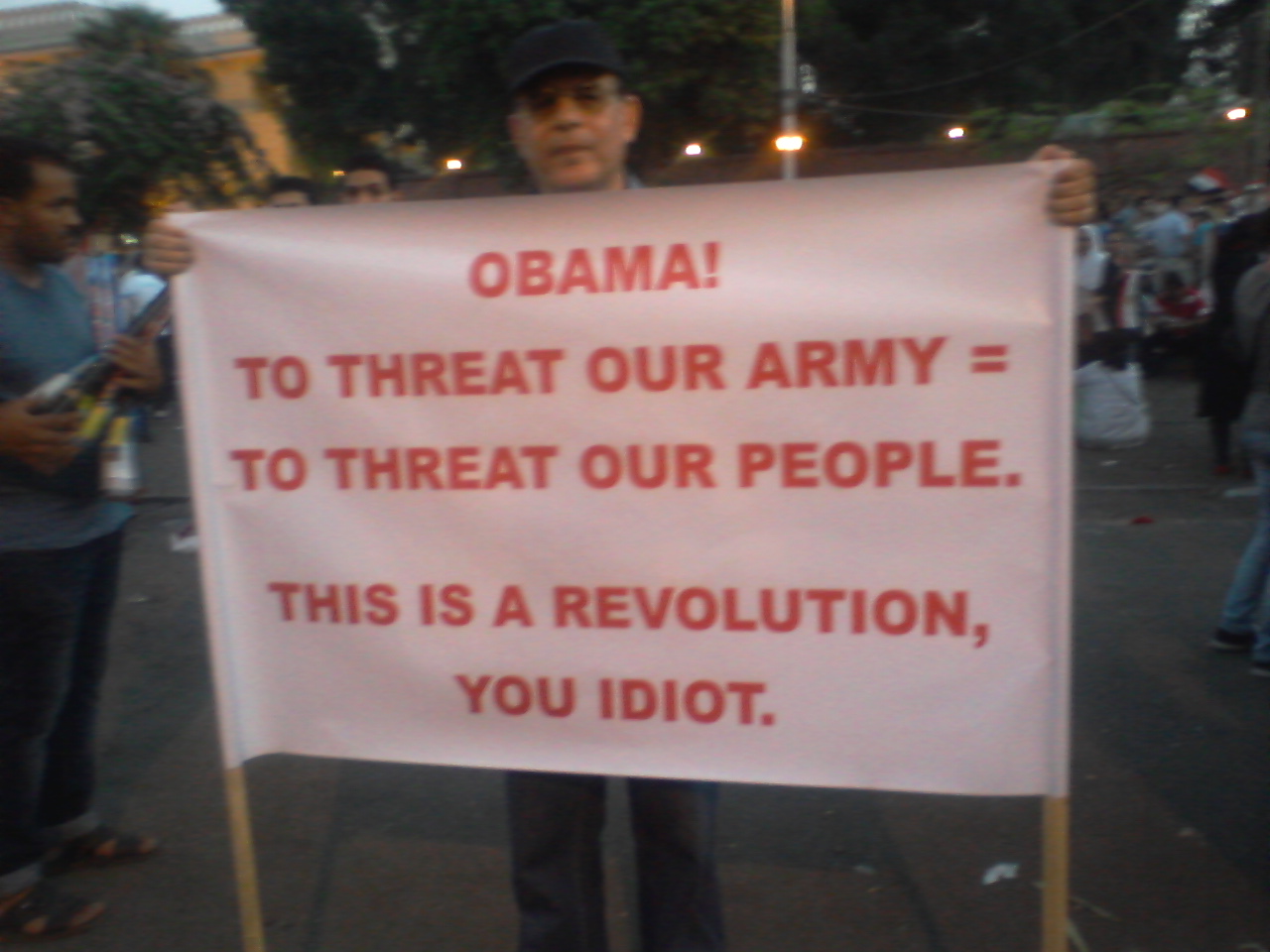 Egypt and that he would be doing so by discussing the large social structural concerns relating to social control and cohesion.

A point that I try to make in my sociology courses is that social life is a complex chaos of craziness. Given any social event (especially something as large as national-level protests and military action), there are a lot of factors in play. In order to come to an understanding of any social process then, we need to whittle down that craziness into something we can manage. Frequently, the way we do so is through applying a particular framework (or theory) through which we view the events. This framework cues us into what elements to pay attention to and which to ignore. So while Nathan was looking at the revolt in terms of social control, I am going to use another framework — the power of naming — to explore another part of the Egyptian events — the U.S. response.

A name has three components. First, the label (that’s the obvious part). Second, it has some kind of affective component (how you feel about the thing). Third, it indicates to self and other what should be done with the object that has the label. For example, if there are flames racing up the aisles of a theater you are likely to label that “FIRE!”. You probably don’t much LIKE fire (at least in this context). And, when you yell “FIRE” in that theater it suggests to you (and everyone that hears you) that you need to hall butt out of that theater.

“The dogs have done it and made a coup against us.”

In early July, both pro and anti-Morsi groups gathered in Tahrir Square to protest (or support) the administration. A few hours before Morsi was taken from office, the pro-Morsi groups were surrounded by Egyptian military vehicles and soldiers in order to try to keep order (with a number of people dead or injured, how successful that attempt was is debatable). Upon learning of the removal of Morsi, his supports started chanting, “The dogs have done it and made a coup against us.”

Many of you reading this might be wondering what a Coup is. Coup is short for the french coup d’état [pronounced coo day taa]. When the established government of a region is overthrown by a small powerful group such as the military, we call that a coup d’état. As you’ll see here in a second, there are at least 1.3 billion reasons that the name/label coup d’état has power and meaning in Egypt.

Egyptian generals, however, refused to call what happened a coup. Repeatedly, the military denied it had any interest in taking over the government. Army and civilian leaders put together “a post-Morsi government” plan where “the Constitution would be suspended, the chief justice of the Supreme Constitutional Court, Adli Mansour, would become acting president, and plans would be expedited for new parliamentary and presidential elections under an interim government.”

The important point? If military control over Egypt is argued to be only transitional rather than permanent, if a new election will take place and soon, the military may be able to convince the world that the pro-Morsi supports were wrong — then there was NO coup.

Many people, such as Senator McCain (while speaking in Egypt) have clearly labeled what happened a coup. Scholars such as Ozan Varol, agree:

“… Morsi’s ouster was a coup from the outset. For example, Samuel Huntington defines a coup as “the effort by a political coalition illegally to replace the existing governmental leaders by violence or the threat of violence.”  Likewise, Jonathan Powell and Clayton Thyne define coups as “overt attempts by the military or other elites within the state apparatus to unseat the sitting head of state using unconstitutional means.” The Egyptian military ousted a democratically elected president through the use of extra-legal and extra-constitutional means. That is surely a coup d’état under these definitions.”

We generally don’t like coups — particularly when they take place against a democratically elected leader. Why? Most likely because we (and here I mean Americans) believe that the leader was legitimate and to take him (her) out of power is to undermine something we greatly value — democratic decision making. Further, the U.S. government doesn’t like coups because what government wants to support any group that overthrows a sitting government? It would just be asking for trouble.

So, the definition fits. The affect fits the images we see. It’s clearly a coup, right? Well … that depends on whom you ask.

You see, the word coup matters quite a bit for international actors. The word coup has a meaning that would require behaviors that the Egyptian military (and, to be frank, the U.S. government) does not want. For, if it was a coup, U.S. law would forbid us to send Egypt the nearly 1.3 billion dollars of military aid that the military relies upon and the U.S. uses for influence (bribe?) within the area.

Words have power through providing options for behavior. Yelling “Fire!” results in people running for the exit. Calling it a coup means the U.S. can’t give military aid. Not calling it a coup means the behavior suggested by that label (the cutting off of aid) does not have to happen. And with this, the U.S. government will be providing support to a military that recently killed (in one estimate) 924 of its own civilians. Further, the U.S. may end up supporting a military regime over a democratically elected government (the latter being something we’ve always supported). Beyond this, research shows that when foreign support coups the transition to actual democracy is much slower and less likely to happen.

1. Do you think the U.S. should label what happened in Egypt a coup? Why or why not?

2. On a piece of paper draw three columns. Label the columns: “label,” “affect,” and “behavior.” List ten objects that you see around you, explain what affect you have towards the objects, and explain all the different behaviors you have toward (and would expect from) that object.

3. In a post about Where’s Waldo, Bridget Welch explained how we stereotype individuals How does the process explained in that post relate to the three parts of naming discussed in this post? In particular, think about how the label of “female,” “black,” “Asian,” and other people specific labels effect behaviors.

4. Both Nathan Palmer and Bridget Welch have explored different aspects of the coup in Egypt. Think of materials you have covered in your course. What other frameworks could be used to explore this event? What would that framework focus on? How would it explain what happened?