With event names like “Dirty Girl” and “Pretty Muddy,” women-only mud runs have quickly become a hot trend. The LoziLu Women’s Mud Run boasts themed obstacles in the course such as “Bad Hair Day,” “Tan Lines,” and the “Mani-Pedi.” Marketed to women as fun, athletic, fitness challenges, these messy events are structured to celebrate women’s physicality and their ability to “get dirty” like the guys. However, in this post, Ami Stearns suggests that female-only mud runs have a downside. While mud runs and dirty obstacle courses could be sites where the gender binary is challenged, more often the women-only runs serve as sites where normative gender performativity takes place. 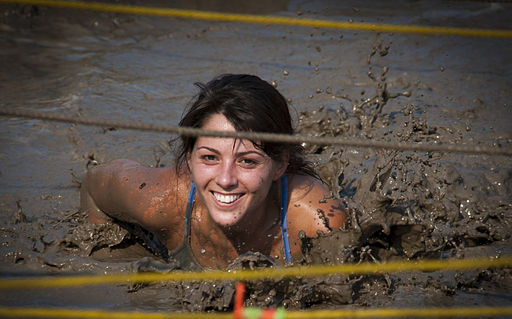 My sister, Erin, is a beast. She’s completed a series of muddy obstacle runs over the past few months, proving her prowess, agility, and stamina while literally clawing through mud and muck. Her husband and three kids have even gotten in on the action by participating in past mud runs with her.

The rising popularity of muddy obstacle courses can provide locations where females show that their strength and endurance capabilities equal those of males, and demonstrate to their daughters that getting dirty and playing in the mud is socially acceptable behavior for women. Interestingly, an off-shoot of these obstacle courses has been marketed specifically to females. While women-only mud runs can provide a space to break gender norms, most of these events seem mired in the muck of normative (or traditional) femininity. Some examples of normative femininity include wearing pink, excessive attention to body adornment and body size, exhibiting nurturing and empathetic qualities, and caregiving.

In the 1700s, Mary Wollstonecraft wrote about the physical restrictions put on women, as if they were ornamental birds trapped in a cage. Two hundred years later, sociologists Candace West and Don Zimmerman coined the phrase “doing gender” to describe how male or female qualities are exhibited in mannerisms, clothing, and speech patterns. The researchers suggested that gender was a process accomplished by everyday interactions, rather than being an inborn characteristic. They argued that an individual’s actions or behaviors determine whether or not they are being true to the categories of female or male. Judith Butler took this concept of “doing” further and argued that gender itself is a performance that can and must be un-done in order to break normative gender stereotypes. Contestants who are covered in mud from head to toe are rarely “performing” maleness or femaleness, suggesting that mud runs might be an ideal location for un-doing gender.

Co-ed mud runs are structured to allow for gender-neutral physical activity. However, when these events are formatted to cater exclusively to women, gender stereotypes- though disguised with mud- are reinforced. The pink and purple-themed website for Pretty Muddy Runs says “There is nothing wrong with running with men, but it can be intimidating.” This statement supports the ideology that women are intimidated by men’s (superior) physicality. The muddy women’s races emphasize spirits of cooperation, rather than competition, and strive to reassure participants that they will not be timed. Running clothes are often pink, complemented with tiaras, boa feathers, and tutus in some cases. Finish line “swag” usually contains typically feminine fare such as cookbooks, pink candles, makeup bags, chocolate, and tampons. The Women Rock Race (though not a “dirty” race) awards champagne and pink-stone pendants to finishers. Even the race names transmit normative cultural conceptions of male and female. While mixed gender events are called Tough Guy and Warrior Dash , female-only events rely on names that convey sexuality and/or attractiveness.

Mud run participants number in the hundreds of thousands across the country and continue to sell out wherever they take place. While females can and should take advantage of messy, dirty, physical pursuits, the take-away question here is why must the gendering of a mud run occur at all?

In no way am I implying women should not wear pink, run in tiaras and skirts, crawl through the mud with their girlfriends, or celebrate with hair treatments at the finish line. I am suggesting that we simply take a critical look at the stereotypical assumptions underlying women-only races. My sister continues to inspire me with her weekend warrior races, as she also inspires her own daughters to get out and get messy. I have a feeling Mary Wollstonecraft would approve.

Dig Deeper: 1. Take the opposite approach of this blog post and argue that the women-only events are empowering and affirming for women and girls. 2. Read the following article about Kathrine Switzer and explain how she broke gender boundaries in the 1967 Boston Marathon. 3. Think of another event, product, etc. that uses gendered imagery or symbols to create male or female versions of the same thing. 4. Compare and contrast the websites of Pretty Muddy and Warrior Dash . How are the websites and races the same and how are they different? What different imagery and symbols do they use?