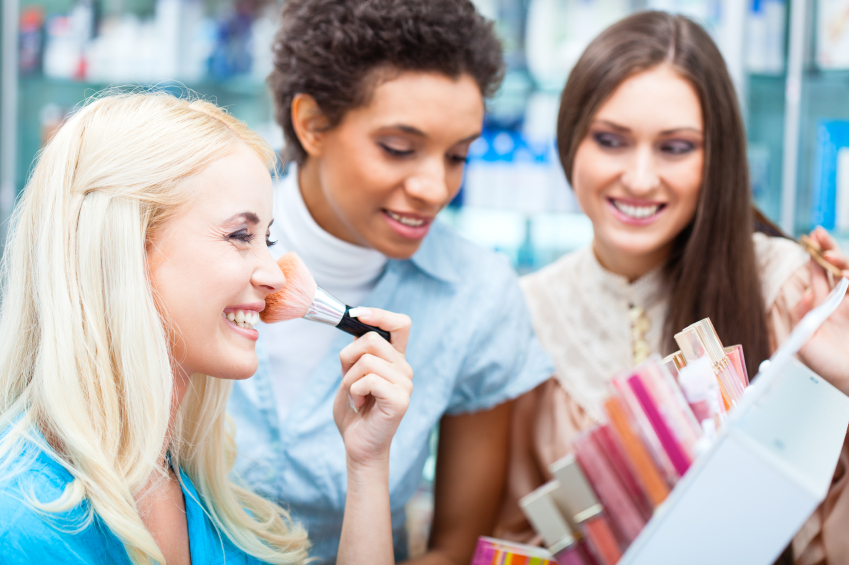 A few weeks ago, I had reason to step up my professional look. I was comfortable with my professional clothing, but decided that maybe I should consider my make-up choices. Where to start? I don’t regularly read fashion magazines and my make-up routine has always been rather basic, so I do not have a lot of knowledge regarding buying and using make-up.

I decided to go the mall. Specifically, I went to Sephora. For those of you who don’t know, Sephora is a store at major shopping malls, which sells makeup, haircare, and facial care products. There are numerous employees in the store so that a customer can get assistance in making their purchases. I chose to shop here because I knew that the employees were presumably knowledgable about the makeup they were selling. Had I gone to a big box store, I would have been on my own. Due to my lack of knowledge from fashion magazines, I needed help! Otherwise, I might still be wondering the aisles of Target. Another advantage was that they used a machine to match my skin tone to products in the store (also a handy way to sell more product!). I didn’t have to fear an orange face!

The history of my make-up routine is as follows:

Sometime in junior high, I asked my mom if I could start wearing make-up and she agreed. I could wear eye shadow, maybe a little mascara, concealer, and blush. I quickly stopped wearing blush. I had no idea how to use it without it looking ridiculous. Eventually, I added foundation and powder to the mix around the time I started college. By the time I finished graduate school, my make-up routine included eye shadow, mascara, concealer, and powder. Occasionally, I would bust out the foundation. The eye shadow I wore was selected by my Mary Kay-selling friend in 2002. I still wear the color scheme she chose, but eventually swithced to another brand.

Then I went to Sephora…

I was completely overwhelmed by the choices. I was at the mercy of the salesperson and bought almost everything she suggested. Fortunately, the person helping me was normally a greeter and not a regular salesperson or I probably would have spent even more money. For example, I spent $36 on a make-up brush! That’s more than the cost of my entire previous make-up routine. I hindsight, I’m pretty sure the greeter felt sorry for me because none of the other unoccupied salespeople had offered to assist me. I can safely assume that I did not fit their stereotypical customer willing to shell out much money for make-up-and up until that day, they would have been correct.

I left the store with several items I had never heard of before the salesperson insisting that I needed these items. For instance, BB cream and primer. The BB stands for beauty balm in the United States. Now that I own a tube of this stuff, I see the words BB on many make-up items. I was also offered foundation primer, but opted to just take the sample as I couldn’t bear to spend another $30 on a tube of make-up. Until that day, I thought primer was something that you put on walls, not on one’s face. I learned that there are actually four types of cosmetic primer: foundation, eyelid, mascara, and lip. Oh the things I needed to learn!

I learned that the product I used to cover up zits is not the same product I should use to cover up under eye circles. After nearly two-decades of make-up applying experience, I also learned that I was applying powder incorrectly. In other words, my confidence in my ability to do this particular aspect of womanhood was challenged by one visit to Sephora.

I’ve kept my make-up routine simple for around the house days, but I am trying out my new professional make-up routine for work. This routine now includes, eyeshadow, mascara, powder, blemish concealer, undereye concealer, and BB cream.

After my visit to Sephora, I bought three fashion magazines. What else did I not know about? How else have I failed at doing womanhood? Fashion magazines and make-up stores are simply two sources of gender norms, specifically teaching women how to do gender. As I explain in this post, however, doing gender goes beyond doing womanhood or manhood but doing specific types of womanhood and manhood. Moreover, doing gender is not innate, but is actively taught. By visiting Sephora, I learned that my current make-up routine was insufficient for doing professional womanhood.