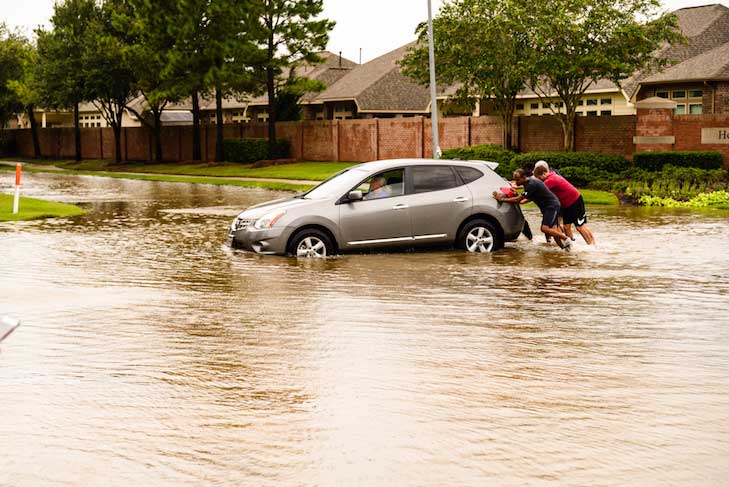 When disaster strikes and people appear to lose everything, there is an impulse to send them anything. In this piece, Amanda Fehlbaum examines why people feel a need to help after a natural disaster and why donating stuff (as opposed to money) may not be such a great idea.

I was born and raised in Texas. I have friends all over the state, including in and around Houston, where Hurricane Harvey recently unleashed devastation and catastrophic flooding of unprecedented proportions. While my loved ones are currently fine, many others have not been so fortunate.

Disasters are considered both internal and external to a social system. Pictures of the destruction are disseminated across the media and individuals’ traumatic stories are told. People see the devastation and want to know how they can help, so they seek to make donations. While many people donate money, some are uncomfortable with sending cash, uncertain how the funds may be used or perhaps misappropriated. Others feel that they lack funds, but they want to provide something, so they look around their house for items to give.

Why Do People Help?

Altruism is concern with the welfare with others. A specific type of altruism is deployed during disasters: situational altruism. As defined by Russell R. Dynes (1994), situational altruism occurs when people believe there are new victims in need of assistance and that existing resources are inadequate to meet those victims’ needs. Media feed into this belief, emphasizing the scope of tragedy, helplessness, anti-social behavior (e.g., looting, price-gouging) and destruction of routine. As a result, viewers’ altruistic behavior is encouraged. Dynes (1994:4) writes:

The impression given is not only is altruistic behavior needed in this situation, but it is essential.

The flow of supplies and general donations – both solicited and unsolicited – and equipment at disaster sites is called material convergence (Fritz and Mathewson 1957). While such donations have become a social norm, it does not mean that all donations are equally beneficial to survivors. Instead, the influx of donations tends to create its own set of issues, or a “second disaster.”

The process has been fairly consistent since Charles Fritz and John Mathewson first documented it sixty years ago. A large number of items of varying type, quantity, and quality arrives at or near the disaster site. This volume of goods usually far exceeds the actual needs of the victims. Many of the items sent are unneeded or unusable; however, that is not known until personnel unload and sort the donations. A major handling effort has to be undertaken to inventory and sort the goods – efforts that could be better spent elsewhere in recovery efforts. Furthermore, the donations have to be stored until they can be distributed, which can create issues in an environment where both usable space and resources are limited. This can lead to conflict among relief agencies as well as various members of the community. Vehicles bringing in the supplies also add to congestion in entry points to the disaster area, impending the flow of more high-priority supplies. Last, the mass arrival of goods that have market value can depress and negatively impact local markets at a time when the economy is trying to recover.

“The main issue is that a significant portion of the material convergence brings no benefits to disaster victims and may even pose risks,” José Holguín-Veras and colleagues (2014) note in their research on post-disaster humanitarian logistics. Dealing with donations often “requires large amounts of resources that are scarce and needed for other more essential tasks” (pg. 3).

Not all donated goods are appropriate for the environment in which they are sent. According to a report by CBS News, Juanita Rilling of the Director of the Center for International Disaster Information said that winter coats were sent during the summer to Honduras after Hurricane Mitch in 1998, and frostbite cream was sent to Rwanda during a humanitarian crisis. Rilling also notes that sometimes there is not enough manpower to sort through donations, resulting in donations sitting and rotting, which is what happened after a tsunami in Indonesia in 2004. Those piles of clothes were ultimately burned because they became toxic. Some people send trash like expired medications, used teabags, used underwear, and used toothbrushes. Those items take just as long to sort through as brand new items.

How to Effectively Help

When the needs of survivors are constructed as needing anything and everything, a gut reaction may be to give whatever you may have, whether or not it is appropriate. It is easy to rationalize giving now and thinking that an item will get used eventually. Donors, understandably, do not want to think that the item they are donating will go to waste; however, the responsibility for disposing of unnecessary items should not fall on the disaster survivors.

One donation will consistently be used is cash. Monetary donations are flexible and pose few logistic concerns. Cash is efficient and effective, allowing organizations on the ground in the disaster area to direct their relief efforts to the immediate needs of the community. The introduction of money into a disaster area can help spur the local economy and non-profit organizations can make tax-exempt purchases that make donations go farther. Some may feel uncomfortable donating money, as it is less personal than donating, for instance, a blanket.

While the donation of goods can be positive after a disaster event, it is only if the goods address specific needs and the goods are managed in such a way that they will actually be utilized. Without such logistics in place, the goods will not get to the right place or the right people at the right time. Ultimately, if you really want to help, send money.

If you want to help Hurricane Harvey recovery efforts, please consider donating money to the Greater Houston Community Foundation, the Houston Food Bank, the Texas Diaper Bank, the American Red Cross or the charitable organization of your choice. If you would prefer to donate your time, please contact the National Voluntary Organizations Active in Disaster and/or their Texas partners.

Photo by Brant Kelly via Wikimedia