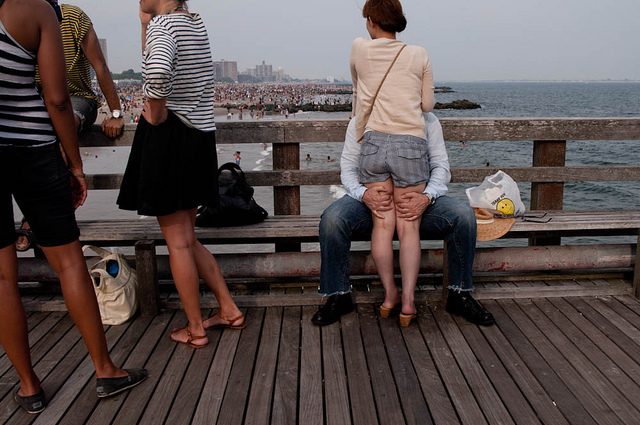 Get a Room!: The Sociology of PDA

Why is PDA (public displays of affection) a social no-no? In this post Nathan Palmer uses Goffman’s Dramaturgy and failed performances to explain why people get so upset.

I had my first experience with PDA at 13 on a junior high school field trip. Tiffany, a classmate of mine, had said something awesome and during the uncontrollable fit of laughter her comment prompted, she raised her hand and we high fived. “Excuse me you two!” our teacher’s voice pierced through our hysterical laughter. “There are rules against that type of behavior!” “Huh? What behavior?” I asked. That’s the moment I first learned about public displays of affection (PDA) and my school’s policy against it. Tiffany and I were written up by our overzealous teacher for “touching each others bodies.”

Public displays of affection (PDA) are widely considered socially unacceptable and worthy of mocking or punishment. Similar to my experience, many schools have policies against it, Tumblr pages have been created just to mock the people who do it, and in some parts of the world you can even be arrested for hugging, or kissing in public. What’s going on here? Why is PDA such a big deal? The sociologist Erving Goffman can help us understand.

In his theory of dramaturgy, Goffman argues that every moment of our lives is a performance of sorts. Using the metaphor of the theater, Goffman argues that the world can be divided into two parts: front stages and back stages. Front stages are the places where you are expected to perform for the audience and stay in character. Back stages on the other hand, are where you prepare to perform, where you can break character without consequence, and they are places hidden from audience members. Within dramaturgy, the audience is the public and each of us are performers.

A failed performance happens when someone “goes off script” or behaves in a manner that is thought to be at odds with the social role they were assigned. Thus, if a performer does any backstage behavior on a front stage, they will have failed in their performance. When a performance has failed, the audience will cue the performers with a stern side eye, a shake of the head, or a biting yet subtle comment (these cues are what sociologists call social sanctions). It is interesting to note that, despite the exclamation in this article’s title, most of the cues people give a performer are subtle or discrete. Typically, the sanctioning audience member wants to cue the performer in no uncertain terms, but doesn’t want to draw more attention to the failed performance.

When people cue canoodling couples to, “get a room!” what they are saying sociologically is, “Excuse me. What you’re doing is a backstage behavior and this is a front stage. Discontinue this behavior and until you find a suitable backstage.” The next time you roll up on a pair of public love birds, try saying the long version of, “get a room!” The looks on their faces will be worth the social awkwardness and everyone will have learned a little something about sociology.