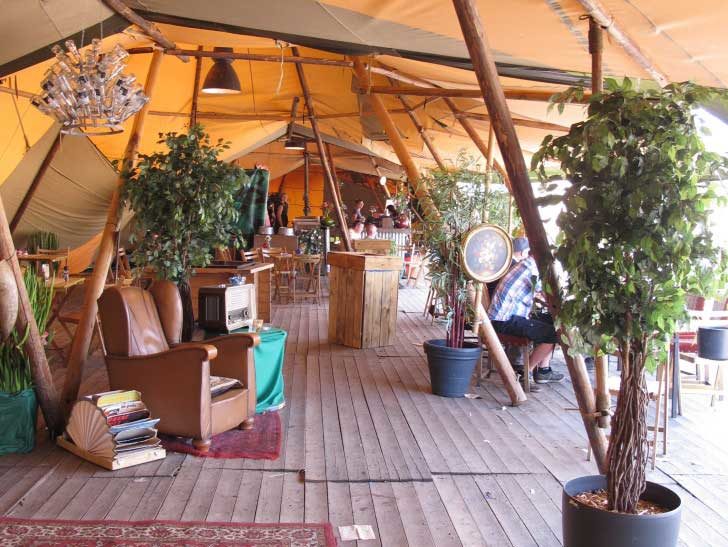 “Glamping” & The Gendering of Outdoor Recreation

Glamping (glamorous + camping) is one of the trendiest new outdoor activities. In this essay Ami Stearns argues that glamping is an attempt to overcome the stereotype that camping is manly and in the process Stearns asks us to consider why we gender any activity in the first place.

What do grilling hot dogs on a stick, pooping in the woods, gathering sticks for a fire, and working for hours to set up a sagging tent have in common? Camping! While it’s true that both males and females go camping, this is an activity that, in our culture, particularly embodies masculinity. Camping brings to mind the rugged outdoors and the sense of manly survivalism seen in movies like The Revenant (do NOT watch that movie without a big, warm blanket and a copious amount of beef jerky).

Outdoor life is typically associated with men, while indoor activities are considered the domain of women. For example, women tend to bicycle indoors while men ride “real” bicycles outdoors more often. Women are still doing most of the indoor chores while men work outside mowing lawns and carrying the trashcans out to the curb. Fishing, hunting, and camping are typically related to men’s activities more often than they are related to women’s activities. Many behaviors, like camping, are gendered, whether we are aware of it or not.

Keep in mind I’m not saying that women don’t camp or don’t enjoy camping. I am arguing that in our culture, we stereotype camping and other outdoorsy activities as more masculine than feminine. In terms of gendering an activity, it is much easier to create new, alternative versions of a masculine activity (like shaving) than to convince women to completely “inhabit” a masculine behavior. Plus, any good Marxist would state that alternative versions of products (like his and hers body wash) are merely marketing gimmicks to double the consumer pool. With all these things in mind, I give you the trendy concept of glamping. Glamping is the word that occurs after mashing-up glamour and camping. It calls to mind Victorian safaris and elegant getaways. Glamping is luxurious (some glampsites come with butler and chef) and “authentic, effortless, and inspiring.”

When I did a Google image search (my go-to for a quick and dirty content analysis) for “camping” and “camping supplies,” what I saw were colors such as orange, blue, and camouflage. The images for “camping” were largely concentrated on the majestic natural surroundings of small, glowing tents. Most individuals pictured were men or couples. Any groups shown camping that did not appear to be part of a family unit were composed entirely of men. I next asked Google images to show me “glamping.” Most of the glamping images were of rather Bohemian looking tents, treehouses, and teepees decorated with lanterns or lights and outfitted with plush mattresses, linens, rugs, and plants. The Google image search for “glamping supplies,” resulted in soft, pastel colors across my computer screen. I saw feathers, plush pillows, pretty throws, Christmas lights… cupcakes and cakes (!!!), and happy-looking women.

Glamping has been embraced by many celebrities such as the ubiquitous Kardashians, Emma Stone, and Solange Knowles. High visibility of glamping among the upper classes and the cost alone of these supplies and glampsites all suggest that glamping can also be seen as a class issue in addition to being a gendered issue. Additionally, we could explore glamping by looking at the way hipster culture has pervaded the 2010s.

How Organizing Society Around Gender Limits Us

However, gender theorists such as Joan Acker, James Messerschmidt, Raewyn Connell, and Cecilia Ridgeway (to name only a few) argue that gender is the most significant way we organize society. Paying attention to gender helps us recognize the way our society is structured and can remind us that we should not have to “fit” within a binary that is not reality. After all, individuals do not all identify as male or female, nor do individuals have to stay within gendered norms. When we see something- whether it’s a product, behavior, or institution – that is artificially constructed for consumption by one gender, we can critically think about what it means to resist these artificial constructs.

Image by Ciell via Wikimedia