Hey, Mister, Can You Spare a Thousand? Crowdfunding as the Middle-Class Version of Panhandling

Asking for money is uncouth. In fact, money is not even really a polite topic for conversation, along with other taboo subjects like religion, politics, and sex. We go to elaborate lengths to avoid people who are asking for money in public by crossing to the other side of the street, avoiding eye contact, rolling up our windows, and pretending to talk or text on our phones. Money requests are, in short, uncomfortable. In this post, Ami Stearns suggests that the middle-class has harnessed the power of the internet to re-construct the way requesting financial assistance is accomplished. Crowdfunding sites like GoFundMe and Kickstarter provide a socially-acceptable method of asking for money. 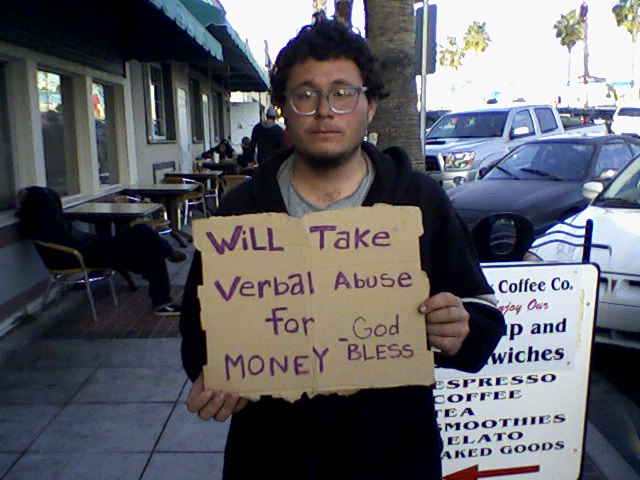 “Only because of GoFundMe and my friends was I able to raise money for shoes,” wrote Igor Vovkovinskiy, the world’s tallest man. Other requests I looked at on GoFundMe included asking for financial assistance to open a cupcake shop, to run for Miss Washington, to help fund artificial insemination and adoption, trips to do ancestry research in Guatemala, animals’ vet bills, and help “living the dream” in New York City. Kickstarter funds creative projects: albums, video games, documentaries. Even rocker Neil Young is using Kickstarter to fund his portable audio player. These days, it’s more than acceptable to ask for money using these sites- it’s hip and fun!

Money is a difficult subject. It’s embarrassing if you have too much or too little. It’s tough (often humiliating) to have to ask someone for money. It’s considered in poor taste to hand your best friend a $20 bill on their birthday instead of buying a present. In fact, when given as a gift, money needs to come disguised, so it’s not seen as tacky. When I Googled “manners” and “asking for money,” over 9 million pages were presented. That’s a lot of advice for a delicate subject!

In 2012, Obama signed the “Jumpstart Our Business Startups” (aka JOBS),  which provided a surge of interest in crowdfunding. Heralded as the democratization of investing, the JOBS act not only allowed alternative routes to funding new businesses, it opened up a brand new landscape for personal fundraising efforts. In this post, I’m focusing on the donation-based fundraising- fundraising that is for a particular cause, with nothing to gain on the part of the donator except satisfaction or altruism.

You’ve probably encountered a panhandler before. For some, part of the daily commute is navigating people standing at the intersection with signs that ask for money in one form or another. Standard American middle-class values does not allow for standing on street corners asking for change, but, hey, times are tough! Crowdfunding websites like GoFundMe and others have become an acceptable medium for asking strangers to give you the wedding of your dreams or help you pay for a risky medical operation.

The internet itself plays the role of a buffer between the person asking for money and potential donors: no awkward eye contact needed. When I ask people why they don’t give money to panhandlers, they usually say, “Because I don’t know what they’re gonna do with it” or “They’ll just buy booze or drugs.” On these crowdfunding sites, though, long explanations and rationalizations accompany the financial request. Does a potential donor really know if their $20 donation is going toward that person’s research trip to Ghana or is the recipient just going to spend it on PBR and the internet bill? Honestly, probably not, but it seems as though the crowdfunding phenomenon has legitimized the giving of money to strangers.

Norms are unwritten rules that help society members navigate daily life. Norms guide us when we shake hands with someone, chat about the weather with a cashier, and stand in line to buy a movie ticket. The middle-class is characterized by certain norms, one of which includes not asking other members of the middle-class for money. With changes in the economy and in technology, however, we decide we can make some exceptions in the rules. We chisel away at an existing rule until it looks a little different. We take something inappropriate and whittle away at it until it becomes a little more acceptable. Next thing you know, it’s perfectly okay to ask (through a crowdfunding site) for money (going toward a certain, specific activity) from strangers (after all, making strangers into friends these days just takes the click of a button).

While it’s still not acceptable for the middle-class to stand at intersections with a sign, you can do the next best thing the next time you’re in need of some funding to backpack across Europe. Just log in!