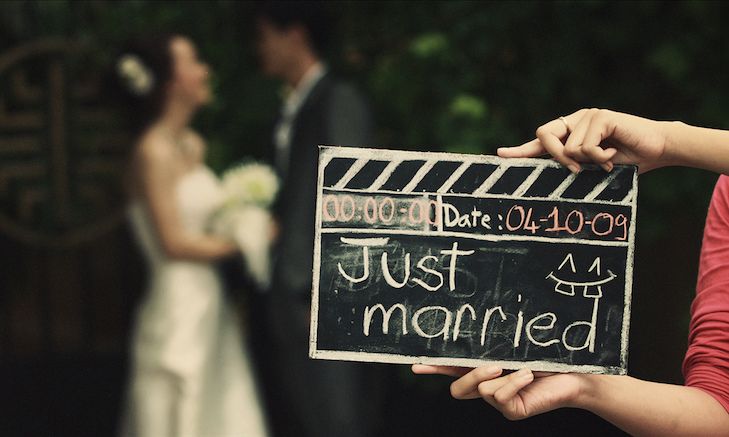 I Do: Examining Expensive Weddings through Three Sociological Theories

It’s June, the month of love… and expensive weddings. Chances are you have been to a June wedding, you were married in June, or you know that June is a popular month for nuptials. In this post, Ami Stearns examines the increasing costs of wedding ceremonies through the “big three” sociological theories: conflict, functionalism, and symbolic interactionism.

June is still one of the more popular months for weddings, either because June is named after the Roman god Juno and his wife, Jupiter,  who reigns as goddess of marriage and childbirth, or because June was the one month centuries ago that people smelled really good.

Weddings, in our culture, are extremely significant. The significance can be shown by examining the cost of an average wedding, which continues to skyrocket. However, simultaneously, the desire to wed has fallen. Why is this? How can we explain the seemingly contradictory practice of exorbitantly priced nuptials with the decreasing importance of marriage itself? Sociology can give us a few hints (you knew I’d go there, right?), especially when examining the reason for these skyrocketing prices for a couple of “I Do’s.”

If you’ve been married recently, you may already know this. The rest of you need to hang on to something as I tell you this. The average cost of a wedding is $32,641according to a recent CNN report. That money would buy a brand new car, provide a 10-15% down payment on an average house purchase, or contribute substantially to a future child’s college education. Some couples elect to take out loans to pay for their wedding, while some rely on parents to pitch in. Frugal and DIY weddings are definitely a trend, but we’re still talking in the realm of $5-6 grand, by some estimates. Clearly, spending over $5,000 on a few hours’ activity indicates there is a huge importance placed upon the exchange of vows in our society. (This dollar amount, by the way, is before taking into account the cost of a honeymoon).

I have a 1942 letter from my grandmother to her parents framed in my office, detailing her wedding day in California so that her folks back in the Dakotas could feel like they played a part. She informs them that my grandfather got the day off by calling in to work sick and that he brought her an orchid to wear as a corsage during the ceremony. She wrote that her ring was “very plain” but just the kind she had hoped for. No family attended and, though the letter does not specify any costs directly, I’d be willing to bet that these two did not need a loan to finance this simple event. Among my friends planning their weddings, stressed out brides often tell me they would much rather just go to a courthouse, but that family and friends would be upset if they didn’t have a “proper” wedding.

Clearly, weddings as events are getting more expensive and more important in our society. Let’s look at three theories to explain the rise in cost and maybe why so many “buy-in” to the pricey nuptial trend.

Conflict theory focuses on inequality. One of the main questions conflict theory asks is, “Who benefits?” So, let’s ask this question: Who stands to gain from such high-priced weddings? How about the Wedding Industrial Complex, a specialized niche of our economy that churns out diamond rings, event venues, cakes, bride and bridesmaid gowns, invitations, DJ services, photography…etc. for consumption by the two people tying the knot. With the recent evolution of same-sex weddings to the Wedding Industrial Complex, some wedding-related businesses will grow substantially. Conflict theory also seeks to answer, “Who loses in this arrangement?” Who stands to lose in these economic exchanges? For one thing, those that can’t afford what they think a wedding should be often delay marriage.

In Edin and Kefala’s 2005 book, Promises I Can Keep, a common theme among many of the single mothers interviewed was the desire to get married only when they had the money. When venues, cakes, and invitations are priced so high that only those who are members of the middle class or higher have the disposable income to buy, it isolates the poor from an important social institution. (I’ll point out here that we have artificially constructed and reified marriage as an institution when it doesn’t have to be. But it is still a very important and venerated status in our society, so those who are not able to participate may feel marginalized further from society).

Structural functionalism views society as a system made up of parts that contribute to its stability. In other words, the Wedding Industrial Complex seeks to remain a stable, enduring system. If expensive weddings cease to become the norm, many corporations could go out of business. Weddings are a “$51 billion dollar industry that employs 800,000 people” (Grose, 2013), meaning that an entire segment of our economy depends upon extravagant wedding plans. What would happen if the trend for expensive nuptials reverses? People would lose their jobs, businesses would close. In other words- instability would occur in the form of unemployment.

This theory might be my favorite lens with which to examine the expensive wedding trend. To explain it way too simply- the basic tenets of symbolic interactionism suggest that the interactions people have with one another, and with the institutions of our society, have specific meanings. We act and react based on the meaning we’ve given to processes and objects. In other words, we have come to believe that a good wedding is an expensive wedding, and that certain elements must be included in order for the ceremony to be seen as acceptable by others. Some argue that social media has played a huge role in the ever-increasing cost of American weddings. Those who are engaged are surrounded by pictures and images of what a wedding should be, from Pinterest to Theknot.com. These sites begin to reflect a certain reality about weddings that influences our actions (and our wallets!).

Will the expensive wedding trend continue or die off? Sociological theory suggests it will continue. Theory is always a useful tool to examine social phenomena- whether it’s popular culture or complex philosophical problems.