Unless you have paid work lined up, soon-to-be graduates frequently ponder what they will do with all the newfound spare time on their hands, while simultaneously questioning how their university degree can be put into practice in the “real world.” Lacking that tangible, reliable post-graduation roadmap, many recent university graduates (at least those who can afford it) are choosing to volunteer internationally, as a way to build their resumes, help others in need and add meaning to their lives. In this post, David Mayeda draws on the concept of neocolonialsim to critique this growing practice of international volunteerism. 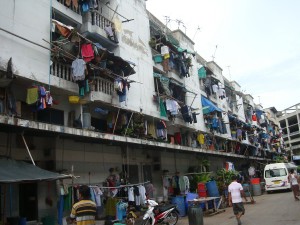 In just over two weeks, 11 current and former University of Auckland students and I will embark on a two-week trip to Cambodia and Thailand to learn about the horrific practices of human trafficking and modern day slavery. Our guides on this trip will be personnel from an organization called, Destiny Rescue, a non-governmental organization (NGO) that specializes in stopping the trafficking of women and children who are coerced into sex work. During the past year, the students and I have been preparing for this trip, which has included all kinds of fundraising, as well as having honest conversations about our short trip’s objectives.

For the most part, our trip will entail learning how broad structural factors (e.g., poverty, discriminatory citizenship laws, corruption in law enforcement and politics, gender and age discrimination, demand from high income countries) contribute to modern day slavery, guided through this learning process with people who deal with these factors “on the ground” as part of their daily work. However, there will be a few occasions where our tour group volunteers with young people who have escaped trafficking rings.

In recent years, mainstream media has begun to question the ethics of such trips, asking if these volunteer efforts are a new form of colonialism. Indigenous scholar and activist, Haunani-Kay Trask, defines neocolonialism as “the experience of oppression at a stage that is nominally identified as independent or autonomous… necolonialism refers not only to dominant colonial retentions but also to psychological injuries suffered by the colonized that continue to wound our internal and external lives” (p. 102-103).

At least technically from a political standpoint, countries like Cambodia and Thailand are independent nations. However, these and many other countries are particularly vulnerable to global relationships with more powerful countries, in which international connections preserve colonial links. When more privileged volunteers offer their time and support to those under less fortunate circumstances in contexts where the volunteers are largely uninformed, it is not unusual to see volunteerism morph into a form of neocolonialism.

As one Australian reporter writes, “the positive aspects of volunteer travel are hindered when a group of travellers believes it’s their responsibility to fix the lives and communities of another… what’s missing is a humility and thoughtfulness that acknowledges that they don’t know anything about the culture and language of their host country, and what’s been tried there before or who’s leading the changes.” In other words, when volunteers travel to other parts of the world to help others, they run the risk of engaging in a kind of “white man’s burden,” where those with relative privilege seek to help those defined as less fortunate in patronizing manners, without making efforts to understand the intricacies of the situation at hand.

In some cases where volunteers go uninformed, they can unintentionally do more harm than good, as discussed in the Aljazeera video above*, and a recent article from The Independent: “Mounting concern that the desire to work in orphanages in countries such as Cambodia and Nepal may actually be leading to the abandonment or even abduction of children from their parents to fuel the boom in eager tourists has led to calls for a radical rethink on the ethics of so-called volunteerism.” And in perhaps the most insidious, narcissistic examples, volunteers can make their efforts more about themselves than anyone else, where taking selfies with “poor people of color” and posting them on social media becomes the volunteer’s most central objective.

Volunteerism is not an entirely bad thing. In fact, society needs more volunteerism, as long as it’s done in socially responsible ways, that do not inadvertently recreate and reinforce neocolonial, patronizing relationships.

*Note that Aljazeera has not made this this video available in every country.