The new prime time television comedy Jane The Virgin has been a big hit. The show has been described as funny and relatable. For sociologists, the show also helps bring to light stereotypes portrayed by Hollywood. The characters on Jane The Virgin break down many stereotypes, especially about Latino culture. In this post, Mediha Din explores these stereotypes. 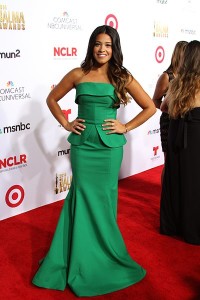 Television and movies can have a strong influence on how we label groups, how we come to understand reality, and which stereotypes we believe are accurate. As sociologists, we describe a stereotype as a preconceived, simplistic idea about the members of a group. These ideas can hinder social interactions and lead to false assumptions about others.  Now let’s turn our attention to one new television show, Jane The Virign, and the stereotypes it is trying to break.

The star of Jane The Virgin, Gina Rodriguez has said that she is excited to play a character that helps break common stereotypes of Latinos/Latinas that have been repeated in television over the years. She describes choosing not to take a role on another well-known television show with a Latino cast, “Devious Maids,” because of the stereotypes it portrays. Rodriguez states: “Being a maid is fantastic; I have many family members who have fed their children in that role. But there are other stories that need to be told. The media is a venue and an avenue to educate and teach our next generation.” According to Entertainment Tonight Online, Rodriquez is also proud that the show “introduces young viewers to a strong female lead who is a “size me” rather than a size zero.”

Stereotype 2: Latinos Are Poor and Uneducated

Although Rodriguez’s character is a waitress in the show, she is studying to become a teacher. The show also depicts many other Latino characters with varying educational backgrounds and socio-economic statuses. One of her love interests, Rafael, runs a successful hotel owned by his father. Rafael’s sister is an OBGYN, and his step-mother is an attorney. Jane’s father plays the role of a very successful Telenovela star.

Gina Rodriguez describes how important it was for her that the show depict Latinos in a manner that she feels is more based in her reality. “I feel like the industry looks at Latinos like it’s such a different experience, it’s such a different world. And it’s like, no, it’s not… My sister’s an investment banker, my other sister is a doctor.  Our experiences are different from the ones that are perceived on television and in the media. And with Jane, I get to show that to the world. I get to show a hard-working girl that is chasing her dreams…”

In case it is not abundantly clear, the stereotype that Latinos are uneducated is terribly inaccurate. According to the United States Congress Joint Economic Committee 2013 report, the number of Hispanic high school seniors who enrolled in college directly after graduation has increased 20% in the past 12 years from 49% to 69%. Hispanic enrollment in college among high school graduates is greater than White (67%) and African-American (63%) students.

Rodriguez’s character Jane is not only studying to become a teacher, she also has a passion for writing. She communicates in English with her mother who is also English speaking. Her grandmother speaks in Spanish on the show, while Jane and her mother respond in English. This portrayal closely matches data from Pew Research regarding English fluency among Latinos living in the United States.  Using data from six national surveys, the Pew Hispanic Center estimates that 94% of third generation Hispanics speak English fluently, 88% of second generation, and 23% of first generation.

Stereotype 4: Latinos Are All The Same

According to the United States Census, 2013 report, 17.1% of the American population — more than 54 million people — identify as Hispanic or Latino. This enormous group of people is highly diverse. Jane The Virgin has not yet addressed the ethnic backgrounds of all of its Latino characters, although the character playing Jane’s grandmother has come to Miami from Venezuela and the actors themselves come from a variety of ethnic backgrounds. Gina Rodriguez is American of Puerto Rican descent, the role of her father is played by Jaime Camil who is of Mexican, Egyptian, and Brazilian ancestry, and the role of the OBGYN who is also a lesbian, is played by Cuban actress Yara Martinez.

In another interview Rodriguez has said, “It’s clear to me that execs need to step outside of their office and really look at life. We are in interracial relationships. We speak multiple languages. We’re multiple religions inside of that. I have Jewish ancestors. My sister converted to Judaism. I have Christians and Catholics and Buddhists in my family. I have multiracial, multiethnic relationships. We need to start casting color-blind because there is no specific anymore.”

According to symbolic interaction, media has the ability to inform how we define our reality, create labels, and build stereotypes. Jane The Virgin is one example of a television show attempting to break stereotypes and portray diversity in a new way.