Learning Demography with the Guess Who? Board Game 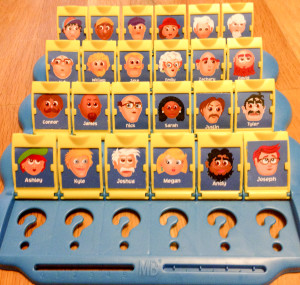 I realize that board games are supposed to be “fun” (at least that is what non-sociologists say), but as a sociologist, I feel the need to ruin everything.

My child was super-excited to find Guess Who? at the thrift shop last week. I recall this game existed when I was child, but I don’t recall ever playing it. So when we got home, my daughter immediately showed me how to play. My first observation about the game was that while it does a  semi-acceptable job of portraying racial diversity, it does an especially poor job at portarying gender or age as it actually exists in the United States.

As I examined the people on the board, I began thinking about how representative this board game is of America. While my daughter asked me if any of my people had “eyeballs looking to the side,” I was busy doing a census of the demographics portrayed on the board.

Here’s how race, gender and age demographics (or characteristics) are represented in the game:

Based on this board game, the typical American is a white man aged 18-65. Hmmm….sounds a lot like Hollywood. So how far off is Guess Who? from the American population? Let’s look at the actual percentages from the U.S. Census:

Of the black people on the board, four are men and one is a woman. None are over age 65.

The same gender pattern found among black people on the board holds true regarding age. Four of those over age 65 are men and one is a woman. The Scientific American reports

A more realistic portrayal would mean that three of the older Americans are women and two are men.

Speaking of gender, Guess Who? does an appalling job of representing men and women as they actually exist within the U.S.  To be representative on gender, the manufacturer would need to replace 7 men with women. Women are portrayed as a numerical minority, which they are not.