In this post, Stephanie Medley-Rath explores how aging is portrayed in a fashion magazine to explore the norms of aging in popular culture. 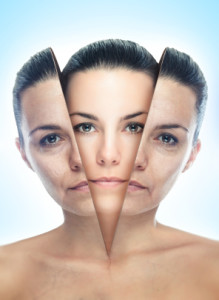 I picked up a copy of the August issue of Vogue at the newstand. This particular issue is “The Age Issue.” The cover proclaims: “Fall Looks for Everyone.”

I saw advertisements with Kate Winslet, Nicole Kidman, and Jennifer Aniston completely wrinkle-free. No surprise here, but disappointing, considering the issue’s theme is aging. I’m younger than all these women, yet I have more wrinkles than them. Of course, I have never found myself accurately reflected in the a fashion magazine.

Very quickly, I realized this issue of Vogue is not about growing old gracefully or even looking good at any age. The magazine was chock-full of advertising promising “younger looking skin in 15 minutes” or “fighting 7 signs of aging.” One advertisement was for some sort of serum that has “complete age control concentrate” on the packaging. Age control in a bottle. What? What does that even mean? The message I got from all of this is that the appearance of age can be controlled.

Shortly before reaching the mid-point of the magazine is an advertisement for cigarettes. Absent from the ad was any indication that smoking cigarettes causes wrinkles. For an editorial message completely bent on “controlling” aging, one would think that accepting advertising for a product that accelerates the appearance of aging would have been refused.

I read on (let’s be real, I skimmed). The writers of Vogue ask the tough questions:

That last question deserves a bit more attention. Importantly, one risk factor associated with stunted height, loss of bone density, and osteoporisis is smoking cigarettes. The cigarette company R.J. Reynolds has three full-page ads in this issue. While Vogue does mention the link between cigarettes and osteoporisis, it is hidden under the subheading of “Skip the Soda.” I’m sure this underemphasis on cigarette smoking is just an oversight on the part of Vogue’s editors and has nothing to do with the advertisers or the lack of medical credentials on the part of the writer, Jancee Dunn. Dunn is a former MTV2 VJ/host, without any medical or health background.

The most interesting feature in this “age” issue (note, “age” not “aging”) is the “All-Ages Show” fashion spread. The magazine labeled each spread for the age-appropriateness of the outfit: 20-something, 30-something, 40-something, 50-something, and 60-something. Vogue, however uses the same model for each layout! The only difference is the clothing. The 60-something is nearly covered from head to toe, while the 20-something wears significantly less clothing.

Vogue reinforces the mainstream American value of youth over age. In fact, while the cover proclaims, “Fall Looks for Everyone,” the reality is that no one over a certain age can be found in this issue. And then, when older people are portrayed, they are made invisible through the substitution of a younger body (e.g., a young model dressed as a 60-something) or are only written about but not photographed (e.g., “Points of Pride,” which is about 50-year-old former hand model, Nancy Hass). Upon further investigation, the young model in the photo spread is barely 21-year-old, Karlie Kloss-just old enough to portray a 20-something.1 Though it might be tempting to brush this off as typical of a fashion magazine, a similar phenomenon exists in Hollywood. Kyle Buchanan at Vulture finds, leading men age, yet their love interests don’t.

Women, then, are not supposed to age beyond the clothing they wear. Men, on the otherhand, are free to gray and wrinkle.

1Kloss turned 21 on August 3, which means she was at most 20-years-old in the photographs!