In December 2012, a young woman from New Delhi, India was sexually assaulted and murdered by six male perpetrators in such brutal fashion that the tragedy provoked nation-wide protests and drew extensive international media attention. The incident also inspired British filmmaker, Leslee Udwin, to produce a documentary titled India’s Daughter (see trailer here). As part of the documentary, Udwin interviewed one of the convicted perpetrators, who declared the victim should not have resisted and was responsible for her own victimization because she violated feminine norms by dressing inappropriately and staying out late at night. In this post, David Mayeda uses Edward Said’s system of Orientalism to analyze a discussion on India’s Daughter that took place earlier this year. 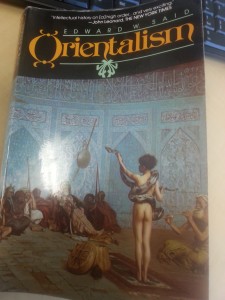 Edward Said is one of the most influential academicians in the Humanities and Social Sciences. His system of Orientalism has been fundamental in assisting scholars to rethink how we understand discourse directed towards people of color and conversely, those of European descent. As described in Said’s seminal 1978 text, Orientalism entails constructing representations of non-European, colonized groups in negative ways across a range of mediums (military documents, popular media, academic study). Throughout this broad discourse, non-European cultures are framed as dangerous, backwards, inferior, simple, mystical and/or uncivilized, and lacking cultural diversity.

Coupled with this definition of “the other,” comes the implicit understanding that those who are not Orientalized must be by comparison, uniformly safe, forward thinking, superior, advanced, scientific and/or civilized. To this end, Said argues that when western European powers define “others” in disparaging ways, they are simultaneously coming to understand themselves in opposing, positive terms.

Said contends further that an Orientalist system served as the foundation for British and French colonialism from late 17th century until World War II, and American neo-colonialism in the post-World War II period, though Said acknowledges Italy, Spain, Portugal, Russia and Germany relied on Orientalist practices as well.

It is in this regard that Orientalism is so important as a conceptual framework, because without first Orientalizing non-European cultures, colonizing powers could not justify taking possession of other countries and imposing economic and educational systems that benefitted colonizers at the expense of the colonized. Understanding themselves as higher cultures, western Europeans assumed the right to bring said lower cultures along, no matter how grizzly the means.

Returning to the example of India’s Daughter, producer Leslee Udwin and journalist/editor Barkha Dutt were recently interviewed by CBS This Morning Co-Host Norah O’Donnell at the 2015 Women in the World Summit. At the 6 minute, 24 second mark of the interview, O’Donnell begins a discussion on the alleged brutal and pervasive patriarchy in India, symbolized through the tragedy under discussion, at one point stating, “…after watching this film, and I’ve been to India, I did think to myself, I had no idea India was so unsafe for women” (see video, below):

In this instance, one might argue O’Donnell frames India in Orientialist fashion, homogenizing India and its citizenry as dangerous and intensely patriarchal. Perhaps unconsciously implied in such a statement, however, is the implication that India must be dangerous and excessively patriarchal in comparison to some other entity. In other words, India could not be described as especially bad unless a more positive basis of comparison existed – presumably The United States.

Dutt immediately recognizes the implicit comparison and interjects. She highlights that India’s Daughter and the tragedy that inspired it have perpetuated a western narrative that Orientializes India. At 7:16 in the video Dutt states, “…statistically, the incidence of sexual violence is higher in the United States and the United Kingdom than it is in India, so I do not like the generalization about my country…I have interviewed Hilary Clinton about five times and every time I used to ask her, why is it so difficult for a woman to be President of the United States of America? You know what guys, these are not conversations we have in India. We had a woman leading us as Prime Minister about four decades ago.” Dutt goes on to point out other comparisons between the United States and India regarding paid maternity leave and reproductive rights that expose the United States’ international lag in certain areas of women’s rights.

Relying on Said’s Orientalism framework, it is not important to make broad-based comparisons which claim India is safer, less patriarchal, more advanced, and so forth than the United States, or visa versa. Rather, it is important to acknowledge that in both India and the United States, strong elements of patriarchy exist. Likewise in both countries, pockets of men openly object to men’s violence against women (though it would be nice if more men globally took such a stance). Check out Srishti Kukreja’s response to the exchange between O’Donnell and Dutt, below, and consider how her commentary critiques the Orientalist assumptions cast upon India: