How We “Do Gender”

Sociologists have long argued that gender is more of a social performance than a biological fact. Many students find this idea challenging because they have up until a sociology class felt their gender identity was just, “natural”. In this post, Sarah Michele Ford uses two models to illustrate the performance qualities of gender. 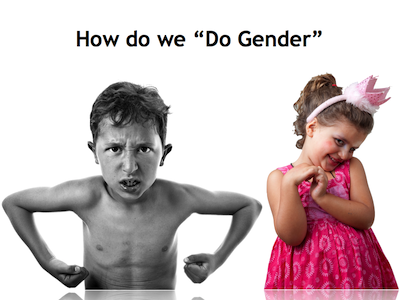 So what do we notice? They’re both 6’2″ tall. They both have cheekbones that could, as the saying goes, cut glass. And they are both models.

You probably assumed that the first model is female and the second model is male.

The first model is Andrej Pejic, who models both mens- and womenswear. The second model is Casey Legler, who exclusively models menswear. Andrej is male and Casey is female.

In society we often associate a particular gender with a particular biological sex. In the United States we often connect masculinity to males and femininity to females, but this connection is socially constructed (not to mention that both femininity and masculinity are socially constructed as well). In the case of these two models, each performs a gender that is not inline with what society commonly expects from males and females.

So what’s going on here?

In their 1987 article “Doing Gender”, Candace West and Don Zimmerman argued that it is best to think of issues of male and female, masculine and feminine, in terms of sex, sex category, and gender. In this conceptualization, sex is “a determination made through the application of social agreed upon biological criteria for classifying persons as females or males” (127). Sex category, then, is the expression of the biological criteria, and gender is “the activity of managing … conduct in light of … conceptions of attitudes and activities appropriate for one’s sex category” (127).

Andrej Pejic and Casey Legler, like all high fashion models, are very good at gender performances.

Gender performances, like so many other aspects of our lives, are governed by social norms. In contemporary American culture, femininity, for example, is stereotypically synonymous with being nurturing, with dressing in clothing that emphasizes (or even sexualizes) their bodies, and with an interest in fashion. Stereotypical masculinity, on the other hand, emphasizes assertiveness, liking sports, and an excessive interest in sex.

Obviously the descriptions above are over-the-top stereotypes. At the same time, our norms of gender performance are stringent enough that you probably had a pretty strong reaction to the idea of a Casey Legler performing masculinity and Andrej Pejic performing femininity. Norms of gender performance are policed through social means; extreme deviations from appropriate displays of gender are either stigmatized or treated as entertainment for a “normal” audience (RuPaul’s Drag Race, for example).

Pejic and Legler’s performances aren’t of the drag show variety, however. As we saw at the beginning of this article, they “do gender” very convincingly; if their sex categories hadn’t been revealed, you probably would not have guessed Even more so than a drag show, their modeling work shows exactly how much gender is a performance that doesn’t necessarily have to be tied to the performer’s sex or sex category.