Remember the Steubenville travesty that occurred in mid-2012 but didn’t start making headlines until months later? If you don’t recall, the case involved teenage males sexually assaulting a heavily intoxicated younger female, bragging of their exploits online, as various parties looked the other way or covered up the males’ actions. In the aftermath, certain mainstream media outlets were more sympathetic to the adjudicated males than to the female survivor. In this post, David Mayeda covers a strikingly similar case that has made headlines in New Zealand. 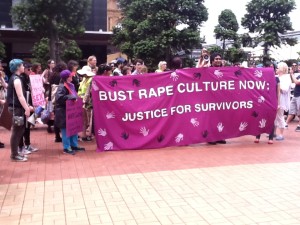 A while ago I began writing a few SIF articles focused on “preventing violence against women.” I discussed the Steubenville case, as well as the tragedy in New Delhi, India and in different form, examples from Pakistan. In retrospect, I should have recalled how Jackson Katz frames the issue by naming it “men’s violence against women,” highlighting men’s responsibility in gendered violence.

This past month, I was reminded how correct Katz is when 3News in New Zealand exposed a group of older teenage males from West Auckland called the Roast Busters. As reported by The New Zealand Herald, “The Roast Busters caused outrage by bragging on their Facebook page about getting underage girls drunk and having sex with them…. The Roast Busters Facebook page and the profile pages of some members – who are said to have targeted girls as young as 13 – have been taken down since news of their activities broke.” 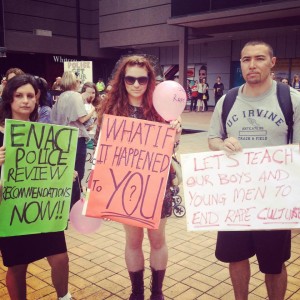 Since this story broke, members of New Zealand’s mainstream and alternative media have provided excellent commentary critiquing the Roast Busters and a broader rape culture in New Zealand that “systematically trivializes, normalizes, or endorses sexual assault.”

Unfortunately, following the Roast Busters’ exposure, a number of other disturbing events emerged that exemplify how rape culture operates in a patriarchal society, where men’s privilege is embedded across society’s institutions. Take for instance the male-dominated institution of law enforcement. Police initially stated they could not take action on the Roast Busters because no victim had formally come forward to complain.

However, the public quickly learned that “police had received a complaint from a 13-year-old girl as far back as 2011.” Demonstrating how police blamed the very young victim instead of taking action against accused male perpetrators, it was later revealed, “The girl…told 3News she was upset by the line of questioning used when she was interviewed by police in 2011, including about what she was wearing” (see also here).

And remember how certain central media outlets responded to the Steubenville verdict, paying no attention to the survivor while lamenting the male perpetrators’ “victimization?” Following publicity of the Roast Busters’ actions, two prominent male New Zealand radio hosts discussed the matter on air, prompting an 18-year-old woman to call in who was a friend of a Roast Busters victim.

The radio hosts responded much like the New Zealand police, asking the young woman, “how free and easy are you kids these days?” Stuff.co.nz states further, “The RadioLive hosts said that if ‘some’ of the girls had consented, ‘that doesn’t make [the Roast Busters] rapists, does it?’”

Again, this is how sexism and rape culture operate systemically in a patriarchal society. Males with power in predominantly male institutions shape the ways institutions respond to female victimization – by trivializing, normalizing, and/or endorsing male perpetration. So what can we do?

First of all, engage in sustained protest. New Zealand has shown its outrage. But secondly, if as Jackson Katz argues, men’s violence against women is largely a men’s issue, guys need to step up. Gender equity issues have historically been framed strictly as women’s issues. Without co-opting women’s leadership, men and boys need to start changing rape culture.

In paraphrased form, here are Ten Things Men Can Do To Prevent Gender Violence:

As can be seen in the photos, the protests from last week and yesterday had a significant number of males across a wide age range involved as supporters and leaders. This was a good thing, and it needs to continue. In yesterday’s protests a former rugby league player, Awen Guttenbeil, stated his role models were rugby athletes who would jokingly discuss “giving their missus a slap when she didn’t listen… It takes a strong man to stand up and say ‘bro, that’s not what we’re about.’” Well said, now let’s all do our part.

Photos taken by author and courtesy of 0800 What’s Up.