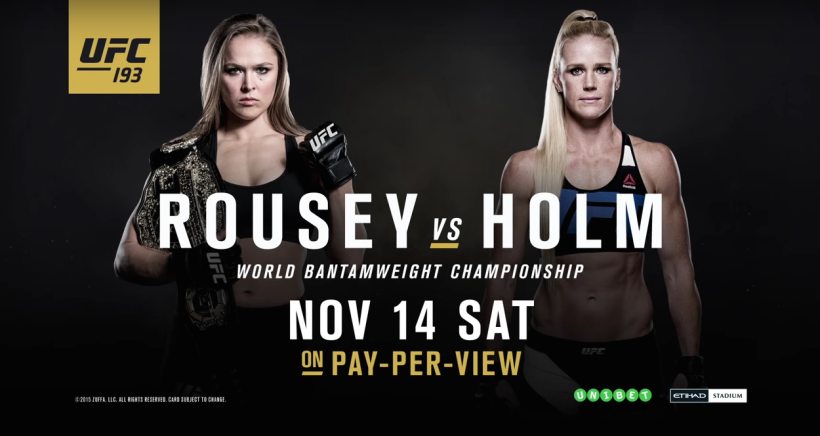 This weekend in Melbourne, Australia, Ronda Rousey will defend her mixed martial arts (MMA) bantamweight championship against Holly Holm in the main event of UFC 193. The Ultimate Fighting Championship (UFC) is marketing UFC 193 as a women’s revolution in sports. Not only are Rousey and Holm – two women – squaring off in the main event, but in the co-main event, Joanna Jędrzejcyk defends her UFC straweight title against Valerie Letourneau. UFC 193 will stand as the first major event in combat sport history where the main event and co-main event are both headlined by female fights. Still, one must ask, even with Rousey’s rise to stardom, how far has the UFC has come with respect to gender equity? In this post, David Mayeda examines the UFC’s inclusion of female fighters and argues UFC 193 symbolizes the limitations of liberal feminism.

Roughly four years ago, UFC President, Dana White, stated soundly women would never fight in the UFC. Less than two years later, he signed Ronda Rousey and Liz Carmouche to compete in the UFC’s first women’s fight for the newly established bantamweight championship. Prior to Rousey’s entrée into the organization, women, including Rousey, had been competing in MMA. Still, the UFC was and remains the most prominent MMA ogranization, and since her victory over Carmouche, Rousey has shifted the way society views MMA.

At present, the UFC includes two women’s divisions. Rousey is champion at the bantamweight level (upper limit of 135 lbs), while Joanna Jędrzejcyk – a 6-time world champion in Muay Thai – stands as the strawweight champ (upper limit of 115 lbs). Although male fighters still outnumber female fighters at UFC events, the inclusion of female competitions in the UFC is now very normalized. However, at this weekend’s event in Melbourne, Australia, female fighters are truly taking the spotlight, as Rousey, Jędrzejcyk and their respective opponents will close out the card in the two main event matches.

Unsurprisingly, the UFC is marketing the event around these shifting gender norms and capitalizing off Rousey’s ascent to mainstream celebrity status. As seen in the promotional video, above, representations of Rousey, a two-time Olympic judoka and bronze medalist in 2008, and Holm, a 19-time world boxing champion, revolve around girls’ contested climb into combat sport greatness, as they disrupt notions of socially acceptable femininity through their childhood and adolescence.

Likewise, in the organization’s preview of UFC 193 male promoters, commentators and coaches herald Rousey, Holm, Jędrzejcyk and Letourneau as some of the most skilled and vicious MMA competitors in the industry, female or male (see video, below).

If we consider the history of women’s sport in North America, where MMA began, promotion of women’s combat sport to this degree is impressive. In Coming on Strong: Gender and Sexuality in Twentieth-Century Women’s Sport, Susan Cahn describes the way women’s sport evolved in the early 1900s. As women advocated for voting rights and increased access to a range of social institutions, resistant males responded by using sport as a sphere that sought to maintain rigid gender boundaries.

Thus, women were encouraged to partake in so-called appropriately feminine sports (e.g., swimming, figure skating, golf, tennis), which lacked physical contact between athletes, accentuated a performative beauty, and allegedly did not jeopardize women’s reproductive organs, thereby reaffirming women’s status as mothers and homemakers. Men, on the other hand, were encouraged to play sports that emphasized a rugged masculinity – gridiron football, lacross, boxing, hockey, basketball, where physical contact and collisions were common. Through these sports, men could reassert a constructed physical superiority over women, even as women began entering leadship positions in non-sporting arenas.

Clearly, UFC 193 symbolizes how far soceity has come, with four women posed set records in combat sport. Taking place at Melbourne’s Etihad Stadium, the UFC is anticipating that UFC 193 will break organizational attendance records. Rousey has stood as the first woman to grace the cover of men’s magazines, declared that she is the UFC’s highest paid athlete, twice won the pretigous Female Athlete of the Year award at the ESPY’s and been honored as Fighter of the Year, besting out boxing kingpin Floyd Mayweather.

Despite Rousey’s individual achievements and changes in gender representation among UFC fighters, it is important to question how significantly the UFC’s organizational structure and culture has changed with the inclusion of female athletes. To this end, I argue that at UFC 193, Rousey, Holm, Jędrzejcyk and Letourneau signify liberal feminism, a strand of feminism which suggests women are liberated after rupturing constraints that historically bound them to the private realm (i.e., motherhood and homemaking). Common themes in liberal feminism include advocacy for women’s self-development, self-fulfillment, and the notion that women can attain full potential by competing in the market on equal terms with men.

One limitation of liberal feminism, however, purports that while some women are able to infiltrate male spaces and excel in public realms, other women from less privileged positions remain excluded. Additionally, the inclusion of some women in organizational structures dominated by men does not translate to considerable transformations in organizational culture. For instance, the UFC’s leadership – its owners, promoters, commentators – those who hold extensive power in the organization, are all still male. Even with female fighters in main event matches, objectified “ring girls” will still traverse the octagon in between rounds. And although Rousey claims status as the highest paid UFC fighter, some argue organizational procedures perpetuate a pay structure that systemically underpays female fighters relative to male counterparts.

In short, although Rousey, Jędrzejcyk, Holm, Letourneau and numerous other female MMA fighters are breaking ground in MMA, radical feminist changes in the industry’s culture have not transpired, illustrating the limits of liberal feminist pursuits.

“I Can’t Walk In These Shoes”: How Culture Manifests in the Material World