There is an unwritten rule for women: hide your menstruation and any products associated with it. One woman recently decided to break this rule while running 26.2 miles through London without a tampon to stop her flow? In this post, Amanda Fehlbaum examines the reaction to Kiran Gandhi’s run and argues that people’s discomfort has to do with maintaining civilized bodies.

As a person who has completed four half marathons, I take inspiration from reading stories about other runners and their reasons for taking take to the road. Recently, the story of Kiran Gandhi’s experience at London Marathon made international news. The tale of Kiran’s run could have gone unnoticed among the 37,675 racers were it not for the growing spot of blood between her legs. Kiran consciously ran without a tampon for 26.2 miles. 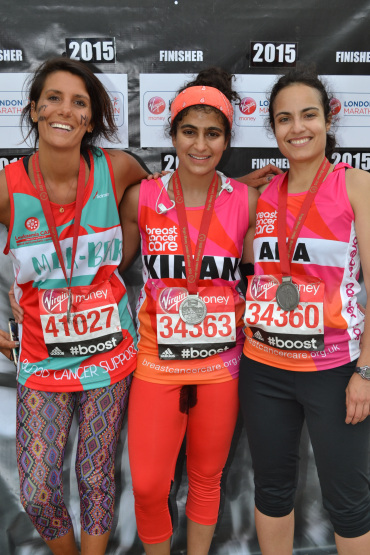 This is the stuff of nightmares for many women. Menstruation is a taboo subject- to be hidden from sight at all times. The concealment of one’s period has come to be a cultural norm or a behavior that is expected of girls and women. I would venture to guess that many women share my adolescent experience of burying a package of maxi pads under the rest of the groceries and hoping that the cashier at the checkout stand was a woman (heaven forbid it was a male classmate!).

Why Did She Do It?

There were a few reasons that Kiran ran without a tampon. As noted on her blog, one reason she let her period blood flow was because she did not want to worry about changing a tampon. She wrote, “It would have been way too uncomfortable to worry about a tampon for 26.2 miles.” Tampons have to be changed every 4 to 8 hours depending on the heaviness of the flow and the absorbency of the tampon itself. Kiran would have had to find a way to have tampons on hand throughout the race, plus a way to adequately wash her hands before and after insertion. If you have spent any time in a port-a-potty, you know that the experience is neither that pleasant, nor is it the most sanitary environment.

The second reason Kiran ran without a tampon was to combat the stigma of periods. Menstrual blood has had a bad rap for quite some time. The Roman naturalist Pliny the Elder thought that menstrual blood could ruin crops, dull steel blades, drive dogs mad, kill bees, and sour milk! While our ideas about periods have progressed to be less damaging, there is still an idea that periods are dirty. Kiran had this in mind when she ran. After the race Kiran wrote:

As I ran, I thought to myself about how women and men have both been effectively socialized to pretend periods don’t exist. By establishing a norm of period-shaming, [male-preferring] societies effectively prevent the ability to bond over an experience that 50% of us in the human population share monthly. By making it difficult to speak about, we don’t have language to express pain in the workplace, and we don’t acknowledge differences between women and men that must be recognized and established as acceptable norms. Because it is all kept quiet, women are socialized not to complain or talk about their own bodily functions, since no one can see it happening. And if you can’t see it, it’s probably “not a big deal.”

The sense of secrecy is evident even when promoting tampons and menstrual pads. In advertisements, you might notice that blood is never mentioned, odor is ignored, and even the word “period” might be off limits. Instead, the absorbency of menstrual pads is demonstrated using blue liquid and allusions to “Aunt Flo” or “that time of the month” are made. At the same time, women in such advertisements are often shown being active – rollerblading, dancing, running – and free to do as they please while they conceal their periods. Kiran’s action challenges the notion that menstruating women’s activity is dependent on successful concealment of their periods.

The last reason Kiran did not use a tampon during her run was to draw attention to girls and women who do not have access to tampons. Kiran claimed, “I ran with blood dripping down my legs for sisters who don’t have access to tampons and sisters who, despite cramping and pain, hide it away and pretend like it doesn’t exist.” For example, homeless women often have difficulty taking care of their needs during their menstrual cycle because feminine hygiene products are not often donated to shelters. According to the non-profit group Days for Girls, girls across the globe miss up to two months of school every year because they do not have access to sanitary supplies.

Kiran’s decision to run without a tampon bothered people, as evidenced by the comments on this article. Responses ranged from the supportive “You go girl!” to the negative “Ugh! You are disgusting!” Why did people have such strong reactions to menstrual blood?

Menstruation and The Civilized Body

One of the key concepts in sociology of the body is that of the civilized body. Sociologist Alexandra Howson (2013) describes how a civilized body is one that manages, conceals, controls, disciplines, and restrains its impulses. Through socialization, we learn that certain behaviors – spitting, urination, defecation, vomiting, sexual activity, menstruating, etc. – as well as discussion of such bodily conduct are to be done in private. Taboos and stigma are often associated with the social management of bodily orifices and fluids so as to keep them in a particular space and place. Expressions of disgust play an important role in creating and maintaining civilized bodies. Sometimes even our bodies react to their breach of the bodily conduct taboo, like when we plug our nose or frown disapprovingly at someone.

Kiran desired to show the world that periods not only exist, but also are a normal part of women’s lives. However, when Kiran allowed her menstrual blood to flow freely, she crossed the boundary between the body and society, uncivilized and civilized behavior. Disrupting this boundary, whether for comfort, to fight stigma, or to raise awareness about an issue, nevertheless elicited strong reactions from observers.

In this essay, Beverly Yuen Thompson talks about how more women than ever are now getting tattooed. Women who collect many tattoos may go ag…