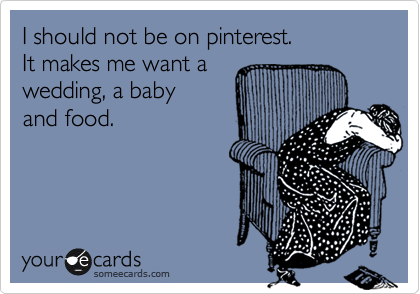 The criticisms of Pinterest can teach us about the importance of sampling. In this post, Stephanie Medley-Rath explores how random sampling and convenience sampling contribute to our understanding of what Pinterest is really about.

I have had a Pinterest account for about a year and a half. When I initially received my invitation, I began following a lot of people in the scrapbooking community that I did not actually know in real life. None of my friends in real life were on Pinterest. Over the last year, that has changed. I now follow the boards of not only complete strangers (wow, that sounds really creepy), but also the boards of people I know in real life (still sounds kind of creepy).

So who cares who I follow on Pinterest? Who you follow on any social network site shapes what you see in your feed on that site and your impressions of the site. For the first few months I was on Pinterest, it was a wonderful place to waste time because most of what appeared in my feed included crafty projects, color combinations, and scrapbook pages-all the things I really wanted to see and browse. Now my feed includes these items, plus fat-shaming imagery, homeschooling curricula, beautifully designed infographics, and sociologically-focused images (see Sociological Images or The Sociological Cinema). My feed changed as the type of people I followed expanded to more diverse groups using pinterest for different reasons. I went from following mostly people who were heavily involved in scrapbooking and other crafts, to people with a much wider range of interests.

Why does it matter that my Pinterest feed changed?

Pinterest has been a source of interest to sociologists and other scholars, and has mostly been criticized based on the content of Pinterest feeds as summarized in the above photo (see for example, here and here).

I am not going to analyze or criticize the popular board themes of weddings, babies, and food on Pinterest. Instead, I want to focus on what these criticisms, though important, teach us about the importance of sampling.

When sociologists and other scientists do research we can get our samples using a variety of methods. Sometimes random sampling is desired, appropriate, and feasible. Other times, convenience sampling is necessary or preferred.

A convenience sample is exactly what it sounds like, a sample that used because it is convenient. In the case of Pinterest, a convenience sample might include studying my own boards the the boards of the Pinterst users I follow personally. Or, I could just go the the homepage for Pinterest and study the images that show up that are pulled from all users-boards. Recall how I described how the content of my Pinterest feed changed as the number and type of Pinterest users changed.

I am not disagreeing that the analyses of Pinterest thus are are incorrect because they rely on a convenience sample. What I am saying is that how a sample is drawn (e.g., random or convenience), influences the information you get from the sample. Your analysis will be shaped by the sample you use.