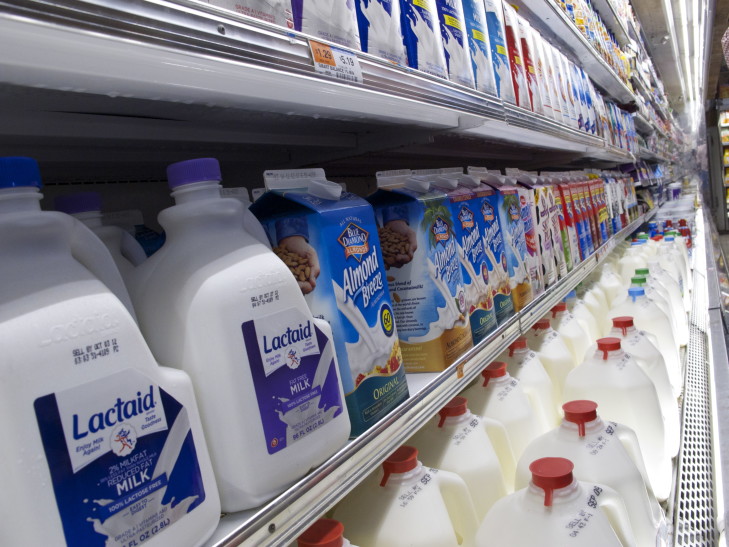 When winter storms threaten, it’s time for a race to the grocery store for milk, bread, and eggs. You know you’ve done it. In this post, Ami Stearns uses this yearly panic to illustrate Durkheim’s concept of mechanical versus organic society.

Comedian Vic Dibitetto’s “Milk and Bread” video resonated with so many people that this former bus driver was propelled to internet fame and is now appearing in movies like “Paul Blart: Mall Cop 2.” We have all been there: racing to the store for staples like bread, milk, and eggs just in case. (Just in case of what? A French toast emergency?)

Once the weatherman or weatherwoman makes a pronouncement, it’s time for you and everyone in your city to stock up the holy trinity to deal with bad weather: milk, bread, and eggs. It’s common sense that households will need to eat something while snowed inside, but why the utter panic?

Some psychologists suggest that we stockpile goods in order to feel in control. After all, what is more uncontrollable than Mother Nature? It could also be that we perceive a shortage of food and are simply hard-wired to go into panic mode, clearing out the bread aisle like a plague of locusts.

But out of all the thousands of food choices in a store-  why milk, bread, and eggs? Grocery store bread is not particularly nutritious, and if the power goes out- how will you cook those eggs? Seems like a more logical choice would be cans of potted meat or tuna, powdered milk, peanut butter, and beef jerky, items that won’t spoil quickly, don’t need refrigeration, and don’t have to be cooked.

Some stories allege that the milk, bread, and eggs panic began in the Northeast during a 1978 New England snowstorm that trapped people inside their homes for over a week. Another apocryphal story reports that it was the onset of a 1950s Pittsburgh storm that saw stores running short of bread and milk. While the origins of this odd modern panic may be in question, there is no doubt that the impulse to clean out the store in advance of a storm warning unites us all, especially when it comes to those three items.

But Why Do We Already Have Milk, Bread, and Eggs?

It’s sociologically interesting to consider the milk, bread, and eggs panic through a lens of modernity. Instead of asking why we panic, why we hoard, and why these particular items… why don’t we ask a larger question? The question is, why don’t we have continual access to these items? The simple answer is modernity. The more complex answer can be best illustrated by Durkheim’s concept of organic and mechanical society.

My great-grandparents farmed in Minnesota. Not only did they experience their fair share of blizzards, they also shared the universal drive to keep the family fed during the winter. My mom can remember visiting their farm and gathering eggs. My great-grandma made bread and milked the cows. She canned the food from the garden during the warm months. In other words, just a few generations ago, our ancestors had their own supply of bread, milk, and eggs at all times.

Durkheim explained this phenomenon of modernity in sociological terms in his 1893 book, The Division of Labor in Society. Earlier societies were tight-knit communities where people shared similar skill sets. Durkheim termed this “mechanical society,” where people did not depend upon one another for goods and services. Instead, they were their own small scale factories, producing crops, clothing, and housing on their own.

Modernity, bringing with it factories and specialization, has caused us to become dependent upon one another. Durkheim termed this type of society “organic society.” In our increasingly complex world, we do not share similar skill sets because there are simply too many skills that our society needs. When I want fried chicken, do I go into the back yard, choose a chicken, kill it, pluck it, and fry it (my great-grandparents did)? No. I go to KFC or the grocery store deli. In our society we rely upon strangers to milk the cows and factories to bake the bread (of course, you can still shop locally and get to know your supplier, for example, by buying from farmer’s markets, but that’s another post).

I doubt that we will ever stop stockpiling this random trifecta of grocery store goods when we hear the siren song of the Weather Channel, but to me it’s a perfect example of our modern, organic society. Any threat to our survival, whether real or exaggerated, results in a much more salient realization that most of us in this society depend upon strangers for our very existence.

Image by AshokaJegroo via Wikimedia