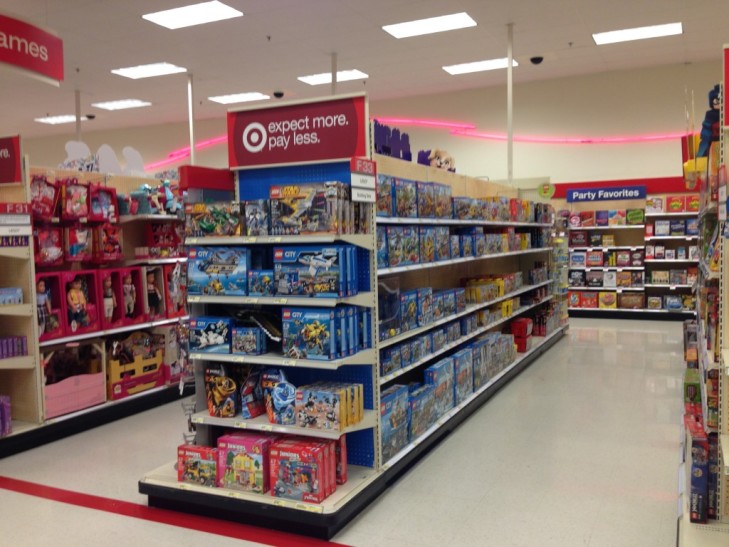 Target, Toys, & Gender: How Much Do Words Matter?

Words matter, but how much? In this post, Stephanie Medley-Rath examines the other ways in which gender-based signage remains in Target even with the elimination of gender-based words.

Target recently announced that it intends to remove gender-based signage in the toy aisle and the bedding aisle. Almost immediately the Internet reacted with both praise and criticism of Target’s decision.

At first, I thought this was wonderful. There really is no such thing as a “girl” or “boy” toy. Toys are toys, but as a society we tell a child what toys to play with based on our stereotypes and by the toys we put in front of them. After my initial reaction, I thought about it some more and decided I need to actually visit a Target before making up my mind.

I was at my local Target two weeks ago and observed workers restocking the toy section. Then I heard Target’s announcement and thought they must have been rearranging due to the new signage. If there are no signs indicating “girl” or “boy,” then they must be reorganizing the toy aisles to reflect this. Wrong!

I went back to Target a few days later (after the announcement) and did notice some rearranging had taken place. I can only really comment on the Lego section as that is the section in which I spend the most time and money. My Target has had Legos in two aisles. In one aisle, Legos  fill both sides. In the second aisle, Legos fill one side (the side closest to the other Lego aisle). The Lego aisles are placed in the middle of the toy section.

Let me first describe what the toy section looks like as a whole. At one end of the toy section, one can find toys for infants and toddlers. Next, you will begin seeing toys in pink and purple packaging: Disney Princess, Barbie, My Little Pony, Monster High, My Generation dolls, and a few others. Then the Lego section appears. Finally, the packaging turns more blue: Superheroes, Teenage Mutant Ninja Turtles, Matchbox cars, Nerf Guns, and so on. 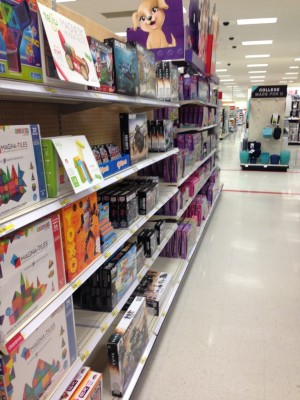 Let’s go back to the Lego section. The Lego section was interesting because the aisle with both sides filled had been filled with Legos from the City, Star Wars, Minecraft, Scooby Doo, and Creator lines. This aisle had been right next to the aisles of pink and purple. The single-sided Lego aisle contained the Friends line and their new Elves line. The Friends and Elves lines also shared an aisle with Call of Duty toys and Magna Tiles.

After the rearranging, the Friends and Elves lines were now sharing the aisle with the My Generation dolls. The City, Star Wars, Lego Movie, Minecraft and Creator lines had been moved to be to the right of them and now are right next to the aisles of blue packaging. Do you see what they did? Target strengthened the association of the Lego Friends and Elves line with “girls” and The City, Star Wars, and so on lines with “boys” by moving their placement.

I did not notice any signage indicating that one aisle contained “girl’s building” sets while another aisle contained “boy’s building” sets. In fact, I had never noticed this signage or needed it to guide my purchases. Target does not need this word-based signage because there are other signs that communicate which toys are for “girls” and which toys are for “boys.” In the United States today, pink is used to mark girlhood or feminity while blue is used to mark boyhead or masculinity. Target realizes this and has committed to removing the gender-based color wallpaper that they use to line the back of the shelves in the toy section.

Target’s moves are important and do send a message, but Target’s moves are limited when the toys are arranged in such a way that a word-based sign is redundant. Perhaps more importantly, Target’s policy change does nothing to change the packaging that manufacturers use to mark their products as being for “boys” or for “girls.”

Target, does however, control how they arrange the products that they carry (though some of this is negotiated into contracts with manufacturers). At my Target, the Legos need three sides of an aisle (or 1.5 aisles). Target could easily arrange the Legos to include one two-sided aisle with original lines (e.g., Friends, Elves, City, and Creator) and a one-sided aisle to include licensed lines (e.g., Star Wars, Minecraft, and Scooby Doo) instead of as a “girls” Legos and “boys” Legos. This arrangement would actually work out really well for my daughter. She loves both the Friends and City lines. You see, the Friends line has the appearance of a city, but as my then six-year-old noted, is missing key infrastructure1 that can only be found in the City line: police and fire protection.

Eliminating gender-based words on aisle signage is but one way of degendering a product. How the aisles are arranged is another factor. Right now, the building sets are kept together, yet separate. The action figures could also be arranged more closely together. There is no reason why Barbie can not share an aisle with the Teenage Mutant Ninja Turtles as they are both action figures. Finally, the color of the packaging matters, which is outside of Target’s control.

And in case you were curious, Target did eliminate the gendered words next to the children’s bedding. The aisle is now called “character bedding.” Here’s what it looks like: 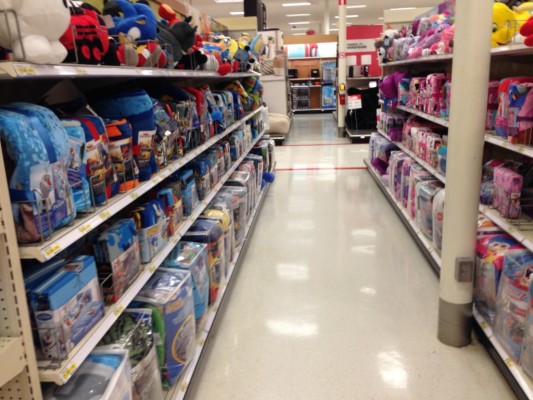 Olaf (from Frozen) is on the left side closest to where I stood. Anna and Elsa (from Frozen) on the right side at the other end of the aisle-just in case it still isn’t clear enough that Olaf is “for boys” and Anna and Elsa are “for girls.” So what exactly did Target do to shake things up and challenge conventional expectations of gender?

If Target really wants to remove gender from the toy aisle and let children decide which toys they want to play with, they would at least have to scramble the organization of the toys within the aisle. They would also have to do something to change the color coded packaging. However, maybe event these interventions wouldn’t be enough because each customer already has their gendered perceptions of toys firmly entrenched in their minds. If the trucks and dolls were side by side, our gender socialization would (at least for a while) have adults buying trucks for baby boys and dolls for baby girls. Target is a powerful player in our gendered society, but it alone cannot change society.

1. [Ok, so she did not really use the word “infrastructure,” but she did make this observation that her Friends-based city was missing some key city-elements.]↩