About three months ago I moved from Honolulu, Hawai’i to Auckland, New Zealand. Moving to a new country made me keenly aware of my American-centered sports interests. While in the United States gridiron football is king, across the Pacific and Australasia, the sport of choice is rugby. For the past six weeks, New Zealand has been hosting the 2011 Rugby World Cup (RWC), with the home team’s “All Blacks” just defeating France 8-7 in the finals. During this time, the RWC had to share its stage with global movements for social equity. 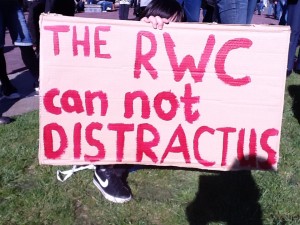 Before the RWC even began, advertisers were manipulating consumers’ desires, coupling New Zealand’s scenic beauty with sporting nationalism and a perceived need to buy tickets. As seen in the adverts supposed buyers of tickets (which could cost up to $1,500 per seat in the finals) range from a variety of nationalities, ages, class groups, and were both male and female. With those left out being ridiculed for their said deficiency, the message is clear – buy your tickets now! Buy! Buy! Buy! As the adverts say oh so blatantly, “you gotta be there!”

Of course RWC organizers argue that much like other major international sporting events, the RWC is supposed to stimulate New Zealand’s economy, promoting tourism and corporate investments that will benefit the country long-term. Uh wait, didn’t Greece host the 2004 Olympic Games? A lot of good that did to spark their economy, eh? The fact is, a litany of examples stands which illustrate how past international sporting events have run major cities into long-term fiscal deficits. Already, some accounts suggest New Zealand will lose approximately $39 million for hosting the event. But that’s not all.

Along with any big-time, predominantly male sporting event comes the virtually requisite sexism. Across Auckland’s CBD, it was not terribly difficult to find gender discrimination sifted in with the RWC festivities. Whether it was organized street performances or business adverts, sports’ global proclivity to tie in sexist imagery held true in the RWC celebration. See the stereotypical and oppressive sexism and masculinity for yourself:

Rugby World Cup 2011 – You Gotta Be There (YouTube Video)

And finally, there is the issue of national priorities. As New Zealand’s mainstream media incessantly promoted the RWC, the world struggled through its ongoing economic crisis. The influential bankers and corporate moguls who caused the global financial meltdown are now being confronted with a worldwide “Occupy Movement,” where activists are vigorously demanding social justice and criticizing corporate greed across 951 cities in 82 countries. These activists refer to themselves as “the 99%” – the 99% of the population exploited by the wealthiest 1% of the population.

Unfortunately the exact opposite is true for countries like the United States, United Kingdom, and New Zealand who can “stand proud” as high-income countries with extensive gaps between a small group of wealthy elites and the masses of citizens who struggle to make ends meet – social stratification anyone? As noted previously, these masses are the 99%, standing globally in opposition to corporate executives and their political associates who are more concerned with maintaining their opulence than creating a more equitable society with fewer social problems.

So while the RWC went on garnering extensive media attention and political support, the 99% worked arduously to get any political attention at all. Still, juxtaposed alongside Auckland’s commercialized RWC propaganda, the 99% demanded social justice, as seen in this “Occupy Auckland” protest from 15 October 2011.

And let’s hear what this is really all about:

So where did the New Zealand government’s priorities lie – in promoting a transient Rugby World Cup jamboree that benefited a small number of wealthy elites and may drive the state further into economic anxiety, or in addressing the numerous social problems that plague a much greater proportion of its citizenry?

Hosting international sporting competitions is not the problem. The problem lies in hosting fiscally risky events while simultaneously promoting them as economic saviours, and promoting them to such a degree that far more important social issues (e.g., poverty, intimate partner violence, disproportionate minority incarceration) are pushed once again to the political backburner. It’s no wonder the 99% are demanding social justice across the globe.

[All pictures taken by author.]