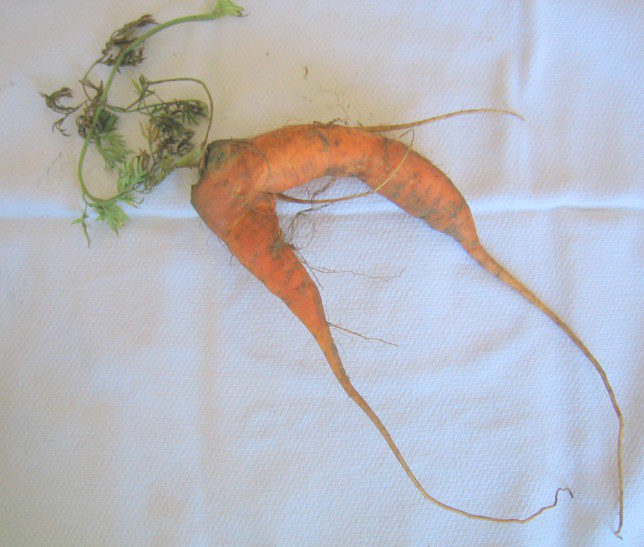 The Good, the Bad, and the Ugly: The Social Construction of Cosmetically Challenged Food

Have you ever bought a potato that looked like Abraham Lincoln’s face, an eggplant that had arms to hug you with, or an orange with a strange growth? Why is it that in America, we pass over “ugly” produce that is nutritionally sound in favor of pretty produce? In this post, Ami Stearns argues that the designation of our fruit and vegetables as edible or non-edible has been socially constructed.

In America, a quarter to a third of all food grown is simply never eaten. In fact, much of it is discarded before it even has the chance to reach the grocery store shelves. When organic “trash” is added to a landfill, dangerous methane gas is produced, which is a significant contributor to the greenhouse effect. Not only is trashing organic matter dangerous, it is a moral and ethical issue as well. According to Jonathan Bloom’s American Wasteland, twenty-five percent of the food that Americans waste would provide three daily meals to over 40 million people. We are a culture that celebrates throwing things away as a symbol of high status. American sociologist Thorstein Veblen wrote about our consumer culture in the late 1800’s, arguing that the higher one’s social standing, the more one should consume, discard, and consume again.

Our throw-away culture replaces phones not when they wear out but when a new one is introduced, and also re-creates this behavior with food. Because we live in an environment of excess, we are free to be wasteful. Food waste is an issue at all levels, from individual families to mega-corporations. The average family throws out food that costs them $1,365 to $2,275 per year. The food waste that restaurants discard is now equal to approximately 15% of the average landfill waste. A full 20% of crops grown are turned away by grocery stores based on the cosmetic appearance of the fruits and vegetables.

Grocery stores insist on a certain “perfect” look for their produce. Skin discolorations and other unsightly blemishes, shapes, or textures are deemed not fit for the fruit and vegetable aisle. Many good-looking tomatoes make it all the way to the grocery store loading dock only to be rejected due to bumping and bruising from the long trip. Because this practice leads to so much waste, food activists have begun raising awareness about the waste of perfectly good, unattractive food. Let’s call it the ugly fruit movement.

The Ugly Fruit movement is taking a variety of forms. All of the programs share a common goal: getting grocery stores to promote their misshapen, cosmetically-challenged produced, and getting consumers to buy them. Check out the @UglyFruitandVeg twitter handle and the Produce with Personality movement. In France, a market not only sold out of its ugly produce in two short days but also increased customers to the store. These campaigns are trying to alter our expectations for fruits and vegetables, arguing that there are environmental costs to being so choosy. Ugly Fruit activism challenges our perception of what edible food should look like.

So why does it matter so much what our food looks like? Veblen’s theory of consumption works to explain why we never have a problem trashing things, but does not go far enough in explaining why we, our grocers, and our restaurants want perfect-looking produce. We can use social constructionism to explain the process. Peter Berger and Thomas Luckmann wrote The Social Construction of Reality in the 1960s, arguing that what passes for reality is actually constructed by our interactions with each other. Over time, these interactions, behaviors, and beliefs become “institutionalized,” meaning that they become firmly embedded in society.

The concept of social constructionism has been previously discussed here at Sociology In Focus: here, here, and here. Reality is basically an iterative process, with our actions reinforcing our beliefs, which reinforce our actions. Let’s apply this concept to the picture of the carrot above. If this misshapen carrot is placed with dozens of cosmetically-perfect carrots, stores have figured out it will not sell. People would rather buy and consume (or let sit in the bottom drawer of the refrigerator) food that looks good, in spite of how good it might taste. Some of this might be to blame on the recent phenomena of food porn, but we’ve been visually assessing our food for decades.

Modernity and industrialization enabled society to consume products that were standardized- think of the perfect rectangular cube of white bread as compared to a lumpy loaf of homemade bread. Perfection became a standard by which we became accustomed, perfection was the sign of a highly evolved and civilized society, one where carrots do not have extra growths and apples do not have faces. As a society, we came to expect perfection and standardization, so much so that we are willing to discard perfectly nutritious, wholesome food. We have socially constructed what is edible and what is non-edible, and it has become our reality.

Photo by Unknown Author via Wikicommons