The Meaning of Helicopters: Unequal Access to Trauma Centers

In rural areas, helicopters come to symbolize unequal access to trauma centers. In this post, Stephanie Medley-Rath explains how the meaning of helicopters varies depending on whether you are in an urban or a rural area. 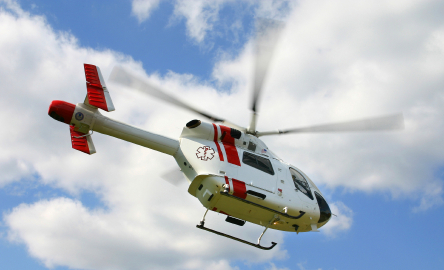 When I lived in the city, helicopters meant one of two things: the media or the police. The news crews were either providing overhead footage of weather or traffic conditions. The police were looking for someone, most likely, an alleged criminal. These helicopters were things I learned to ignore.

Around here you can buy a membership for about $60 a year to an air ambulance company that provides coverage for helicopter transport provided it is from their company. The first time I saw my parent’s sticker indicating this coverage (on the back of their cars in case of a car accident and on a window by the front door of their house in case the problem starts at home), I thought they had been scammed. “What a waste of money,” I thought. Then it dawned on me. They live really far from a trauma center. There is a hospital in their town, but the nearest trauma center is 50 miles away. 50 miles really is not that far considering that there are much more isolated regions in America.  “Helicopter flights cost from $5,000 to $10,000, while the expense of an ambulance trip is $500 to $1,500” (Ostrow 2012) making membership to an air ambulance company appealing.

Helicopter emergency medical services (HEMS) are associated with a 1.5% increase in survival. My parents live right about the point where ground transport could take longer, but they do not have to travel too far from home to be even further from a trauma center. Critics point out that there are risks involved with HEMS, including higher crash rates than other air transport and the fact that many of these helicopters operate for-profit. In other words, HEMS are risky, expensive, and profit may motivate their use rather than best health care practices, yet they do increase survival rates.

Rural Americans not live further from trauma centers, but they have fewer trauma centers available to them. Check out this list of trauma centers in Illinois here. Region 7, 8, 9, 10, and 11 are all in the Chicago metro. Regions 1 through 6 serve the rest of the state. In other words, the Chicago metro is split up into five regions and has 44 trauma I and II centers. The rest of the state is split into six regions and has 19 trauma I and II centers, four of which are out of state. Granted, the out-of-state hospitals are on or near the border of Illinois, but consider that health insurance typically pays different rates depending on whether you are seeing providers inside or outside of your state.

More recent research reports similar findings: “Two thirds (67%) of the population in urban areas had easy access to trauma centers, and 12% had difficult access, whereas in rural areas, these percentages were 24% and 31%, respectively” (Hsia and Shen 2011:46). Hsia and Shen (2011) further point out that rural areas with higher concentration of vulnerable groups (African Americans and the near-poor) were at greater risk of difficult access to trauma centers. In other words, race and class intersect with geography creating even greater disparities.