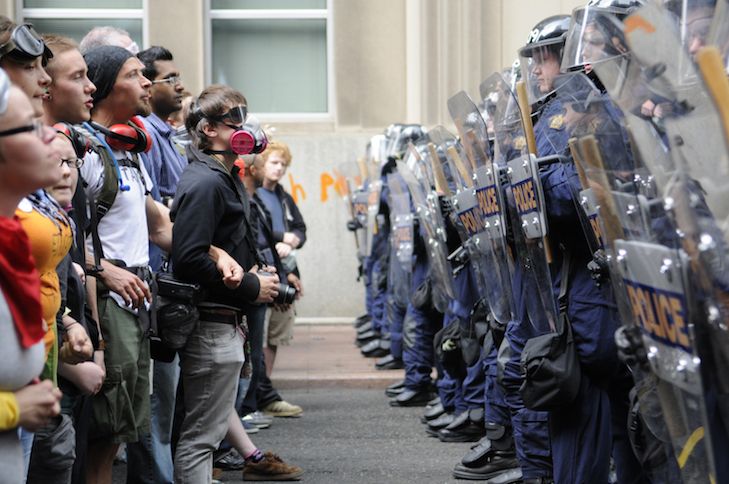 The Sacred Right of Protest & the Profaning of American Democracy

In this essay, John Kincaid examines Durkheim’s concepts of the sacred and the profane in relation to the recent election, protest and art.

In the immediate aftermath of the election earlier this month, there were many protests that took place across the nation. Many of the protests opposed the election of Donald Trump to the presidency, but there were several rallies in support.

One of the immediate conversations in the wake of these protests has been over whether or not it is “appropriate” to protest the results of a presidential election. Many commenters have argued that the protests are “un-American,” and that the protestors are not respecting democracy. In sociology, we often look at these types of debates through the lens of the concepts of the “sacred” and the “profane.” Emile Durkheim argued that the sacred and the profane are essential components of social life. Those things a society holds sacred are objects, actions, symbols etc.. that we set aside from, and elevate above, everyday life. The profane is the ordinary, the everyday, the dingy aspects of life that surround us constantly. Observing and maintaining the boundaries between the sacred and the profane can create solidarity (another Durkheimian concept) between members of a society. They provide touchstones of shared values that can help unite members of a society that may be separated by distance or even cultural difference.

In the U.S. we tend to hold the ideal of “democracy as a sacred value, and part of the reason that the anti-Trump protests have drawn attention has been because they violate our idea of democracy as a sacred ideal. We as citizens are supposed to respect, honor and cherish the democratic process, not dirty those ideals by protesting the results of an election.

Distinguishing the Sacred from the Profane

Societies constantly debate the relationship between the sacred and the profane. For instance, there was a huge uproar when I was a kid about a piece of art that was called, “Immersion (Piss Christ).” The artist basically took our discussion today to an extreme, mixing two elements, the sacred (an image of Christ) and the profane (urine), by taking a picture of a small crucifix in a bottle of urine. The piece was supposed to symbolize the cheapening and commercializing images of Christ. The crucifix itself was a small and plastic, something disposable and cheap

The artist was right in that images of Christ are all over our culture in ways that do not necessarily reflect the sacred nature of the symbol. For instance, you can go to most grocery stores right now and buy candles that have the virgin Mary or Jesus on them, not to mention t-shirts, key-chains, bracelets, and a million other things that you can find online.

The reaction to the piece made a ton of news when I was a kid because conservatives used it as an example of the offensive things that the government was wasting our tax dollars on by supporting things like the arts (the artist had received a grant from the National Endowment for the Arts). Over the years the picture has stirred up protests and several attempts to have the government ban its display, not to mention attempts to destroy the picture. One of which succeeded in 2011. This is kind of ironic given that the artist was drawing attention to the ways in which a sacred object like the image of Christ has lost some of its symbolic power. In a strange way the piece actually proved how powerful the symbol could still be, even though there have been no similar objections to other Jesus themed products.

The Profaning of American Democracy

This double standard is also present in the reaction to Colin Kaepernik’s national anthem protest, and a few months ago to gymnast Gaby Douglas not putting her hand over her heart when the anthem played at the Olympics. Who is allowed to protest and who is allowed to appropriate sacred American symbols changes based on race, gender and political power. It shows us the “socially constructed” nature of these powerful symbols, but it also shows us that we still have deeply ingrained senses of the sacred and the profane that have real impacts on our view of the world around us and the people in it.