The Sociology of MMA: A Masculine Culture of Lack

If you’ve ever seen something you wanted to purchase that was advertised in a way that made you feel inadequate, I have a feeling you will relate to this post. Advertisers have a way of tapping into our emotions and sense of insecurities that influence us to build emotional relationships with products. This is all part of living in a society where ongoing production of goods and services is reliant on the population’s incessant craving for consumption. In this post, David Mayeda discusses a magazine’s presentation of mixed martial arts legend (MMA), Randy Couture, and how that presentation feeds into a “culture of lack.” 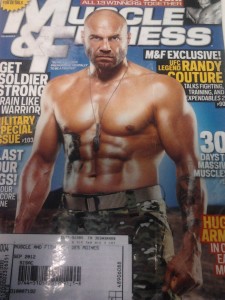 A few weeks ago I was working at the Auckland City public library. While strolling through the magazine section, I saw an issue of Muscle & Fitness with MMA legend, Randy Couture, on the cover. You may know Couture from his more recent acting career; he starred alongside Sly and company in The Expendables. But Couture’s stardom began as a combat sport athlete, first as a four-time Olympic alternate in Greco-Roman wrestling, and then winning Ultimate Fighting Championship titles five times in two different weight classes (heavyweight and light heavyweight), throughout his 30s and 40s. Now retired from professional fighting, Couture is approaching age 50.

Despite his seemingly ageless athleticism, Couture’s photo on the Muscle & Fitness cover made me do a double take. Could a near 50-year-old really look like this (see top photo)? Damn that “old man” is massive, and ripped! And if Couture can showcase such musculature, presenting an idealized version of physical masculinity at nearly age 50, why shouldn’t I?

Okay, I didn’t exactly go that far in my line of thought. Not only have I seen Couture fight on television a bunch of times, but I met and interviewed him back in 2007 (see picture, below).

The fact is, despite being a big and extremely athletic individual, Couture is not overwhelmingly massive. I’m about 5’8″ tall, around 175 pounds. The picture above of Couture and me is a bit misleading since I’m closer to the camera, but you can tell his actual physique is nowhere near that presented on the magazine cover.

I also checked out the article in Muscle & Fitness, and it shows pictures of Couture working out:

As seen in these exercise photos of him, Couture is clearly in shape, but again, his actual physique does not resemble that on the magazine cover.

Alright so let’s do some sociology here. In their book Body Panic: Gender, Health, and the Selling of Fitness, Shari Dworkin and Linda Wachs (2009) discuss the “culture of lack.” The authors write, “media forces in particular, and advertising specifically, conspire with more diffuse notions of power in contemporary society to simultaneously produce a ‘culture of lack’ and an endless array of products to assuage lack, or at least the stigma of possessing it” (pgs. 10, 11).

In short, we live in a consumer culture that constantly aims to lower our self-esteem so that in order to feel a little better about ourselves, we purchase; we consume. As potential consumers, we are turned into actual consumers when advertisers make us feel as if we are incessantly lacking some quality deemed necessary. In this case, the manipulated, airbrushed cover photo of Couture is presented strategically as an ideal example of masculinity, tapping into men’s physical insecurities. If you workout like Couture, maybe you can look like him too, but if you don’t, you’re that much less of a man.

And moving closer to this idealized version of masculinity means needing to purchase things – the right workout equipment, the right workout plans, the right protein supplements (or fat burners), the right trainers, perhaps even the right workout clothing. Think of the “endless array of products” available for purchase in the fitness industry that we come to believe are “necessary” in order to become a socially acceptable, or dare I say desirable, male or female in society.

And of course the “culture of lack” does not only apply to the world of fitness, or males. It can apply to any number of arenas where we are made to feel inadequate as a means of nudging us into a purchase. This could apply to purchasing clothes, a car, hiring a particular stylist for a haircut, even getting a loan for a very expensive education. And it’s this emotional relationship of dependence between we as consumers and the products available for purchase that is manipulated – this all keeps the capitalist chains of production, churning…

All photos provided by author.