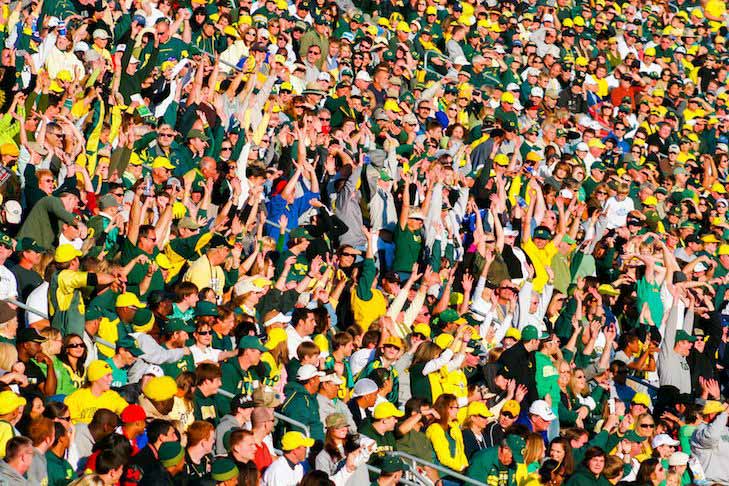 The Stadium Wave & The Study of Social Phenomena

In this piece Nathan Palmer unpacks what sociologists mean when they say that sociology is the study of social phenomena.

As the fall semester begins, thousands of students across the country will be learning about sociology for the first time. If you’re one of these lucky people, then you’re likely to hear during your first week that sociologists study social phenomena. That is a simple description of what we do, but if you find that description less than helpful, you wouldn’t be alone. But, I’m here to help.

First, phenomena is the plural form of the word phenomenon. A phenomenon is any observed action, event, or situation. Hurricanes, birthday parties, and economic recessions are all examples of phenomena. But here’s the complicated part, a phenomenon is not a thing in and of itself, but rather it is something that happens within things or to things. For example, look at the video below.

The wave going through the water is a phenomenon, but the wave is not the water itself. This may sound like a trivial distinction, but stay with me, you’ll see why it’s important in a second. The wave is a disturbance going through the water. It’s a series of cause-and-effect events. To understand how waves operate, we cannot study the properties of water. Instead, we have to study waves as a series of events. Or put another way, to understand waves we have to study them as a phenomenon and not as a thing.

What are Social Phenomena?

Social phenomena are observed actions, events, or situations that are created by society as opposed to occurring naturally. Everyday over 7 billion people interact with one another and these social interactions create and spread social phenomena through our communities like waves going through water. As we are already talking about them, let’s take a look the social version of the wave phenomenon.

A packed stadium of fans watching Clemson beat Wake Forest last year put a new spin on “the wave” by adding their cell phones’ flashlights. As you watch the beautiful phenomenon, ask yourself, who is controlling the wave? Who decided when the wave should start, which direction it should go, and how fast it should move? The answer has to be, everyone and no one. Even if the stadium announcer told the fans to start the wave in a clockwise direction, the speed at which the wave moves is something that no individual in that stadium could control.

A group of physicists who typically researched waves in water, examined recordings of the wave going through large soccer stadiums around the world and found that more often than not, waves turn clockwise and move at a consistent speed of 20 seats per second (Farkas et al. 2002). The also found that the number of people it took to start the wave was relatively small and it varied by what was going on in the game. For instance, if the home team is winning in a blow out (as was the case in the Clemson video), it may take just a few people to start the wave. However, if the game is very close, people will likely not want to be distracted by the wave and thus it will take far more people to get it started.

If you stop and think about it, the fact that there is any consistency to stadium waves at all is fascinating. It’s one thing to learn that a disconnect group of fans could coordinate this large scale phenomenon without the help of any central planner or conductor. However, it’s another thing entirely to learn that the wave goes through different stadiums (full of different people) at roughly the same speed. How can fans who have never met share these similar qualities? Simply put, they can’t.

The stadium wave is a phenomenon; it isn’t the people, but rather it is an action/event that happens between people. The stadium wave is a social phenomenon because it is created by the interactions between thousands of people. No single individual controls it and we cannot understand the it by studying the biology or psychology of the individual participants. Like many other social phenomena, science cannot tell us the precise moment when a wave will occur or why it occurs. Instead, science can only tell us under what conditions a wave is more likely to occur. Or put another way, using science we can discover the contexts that make waves more likely.

Sociology is the study of social phenomena. We are interested in what happens between people and between groups. Although we may collect data from individuals, it is always in the pursuit of answers to social questions. The only way to understand society is to examine the relationships and dynamics between individuals, groups, and organizations.