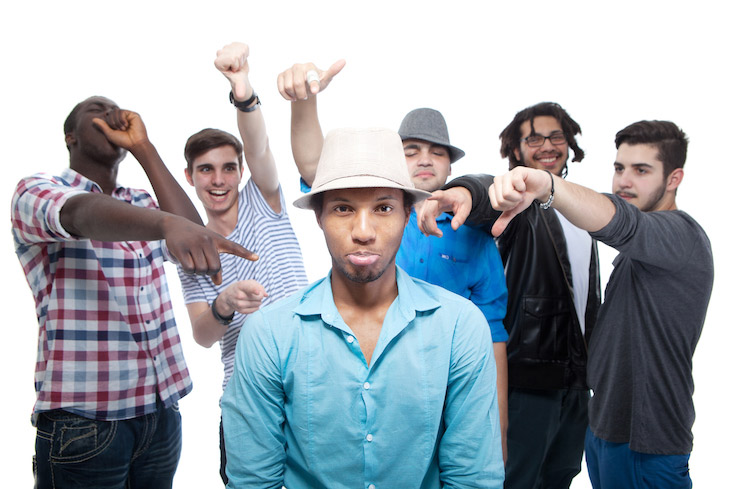 They’re All Going to Laugh At You

In this guest post, Tobias Griffin, asks us to consider the role laughter plays in society by examining the game show Family Feud.

On the television game show Family Feud, two opposing families compete for money by trying to answer questions the same way an anonymous group of one hundred people did prior to the show. The only way to win on Family Feud is by responding with generally accepted answers. This reveals a fundamental assumption underlying the competition on “Family Feud”: namely, that those who do not conform to the social norms of American society should be economically disadvantaged.

A telling instance of conformity-based shaming took place in a 1977 Christmas episode of Family Feud. Richard Dawson, the show’s host, asked a family to “name a food that helps keep Americans fat.” After several successful answers, Dawson comes to a contestant named Steve Jones. Most of the “good” or survey-approved answers having been taken, Steve is forced to resort to original thought. Instead of coming up with another answer that most people would think, Steve says, “sour cream.” This is a reasonable answer: sour cream is fattening; there is, logically speaking, nothing wrong with this response. However, because the response is out of the mainstream, Dawson pouts, frowns, looks doubtful, and mocks Steve. All the members of his family and the audience groan in response to his non-conformist answer—Steve, it appears, has gone against the wishes of the collective. When Dawson calls out “a little sour cream!” it is not on the board. The disappointment and emotional deflation caused by his response is apparent. Steve, by giving an unusual answer, has stepped outside the narrow boundaries of the communal beliefs he was called upon to affirm. He pays the price both financially and socially.

On another episode, Dawson asks a female contestant, “during what month of pregnancy does a woman begin to look pregnant?” The woman answers “September.” Dawson laughs so hard that he is unable to ask the question again for over three minutes. No doubt the discrepancy between intended question and intended answer is that Dawson was looking for a month in which all women begin to look pregnant (i.e. any woman’s third month, fifth month, sixth month), whereas the contestant was probably thinking of a particular pregnancy, either hers or someone else’s, in which that pregnancy began to show.

By infusing her own particular experience into the socially-accepted, generalized understanding of pregnancy, the contestant broke from how Dawson framed the question. Dawson’s prolonged laughter can be seen as a way of shaming the contestant and marking that she has gone outside the narrow frame of discourse that supported the original question. These mockeries also serve as a warning to the viewer watching the game that she or he should not step outside the boundaries of acceptable social discourse; at least not if you want to win the Feud. It’s worth noting that this is a televised ritual the American people have enjoyed for 40 years, suggesting that the repetitive repression of non-conformists is a practice valued by a large segment of the American population.

Henri Bergson (1914:7) has argued that the “comic effects,” of humor often, “refer to the customs and ideas of a social group…” In other words, without strong social values, there can be no comedy, no laughter— laughter is, from this perspective, the reinforcement of generalized social values. Dawson’s laughter is almost always the result of a contestant’s not conforming to the “customs and ideas” of broader American society.

“In laughter,” Bergson (1914:136) argues, “we always find an unavowed intention to humiliate, and consequently to correct our neighbor” Family Feud takes the humor-game one step further: the intention of communal laughter on the show is not just to humiliate, but to impoverish. Looking at Family Feud through this lens we see a show that seems to be sending a warning to all its viewers about what might happen to you if you fail to think like the majority of your peers. Perhaps most disturbingly, this warning does not appear to be one issued by an ill-intentioned, mysterious elite (e.g. the network, the producers of the show, the game’s host), but is rather one that we, by “voting with our remotes,” have been issuing to ourselves for the past forty years.

About the Author: Tobias Griffin is a scholar who specializes in the interaction between culture and sociopolitical theory. His work has been published in Fourteen, Prole, Efiction and Blotter, as well as in the Renaissance Annual Spenser Studies.