Those Holiday Decorations and Alienation

In much of the western world, December and January mark months during the year we dub, the holiday season. For many of us, this entails purchasing gifts for loved ones, receiving gifts in return, celebrating time with loved ones, and making New Years resolutions. People who celebrate Christmas – whether that be for religious or non-religious purposes – frequently do so by ornamenting their homes with festive decorations. But where do all those decorations come from? In this post, David Mayeda uses Karl Marx’s concept of alienation to analyze the production of Christmas ornaments, most of which are made in the Chinese city of Yiwu. 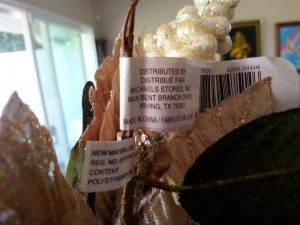 As most of our readers should know, Karl Marx is one of sociology’s founding members. Marx viewed society through a lens of contentious production relations, in which the proletariat class (those who could only use their bodies as currency within the system) was exploited by the bourgeoisie (those who owned the means of production).

According to Marx, in their exploitation, the proletariat would become alienated from society in four different, but related and simultaneous ways: alienated from (1) the objects s/he produces, (2) the processes of production; (3) him/herself; and (4) the broader community of humankind. Now let’s return to this post’s example.

As The Guardian explains, over 60% of the world’s Christmas decorations are made in roughly 600 factories, located in the Chinese city of Yiwu:

This presents a classic example of how proletariat members are alienated from the objects that they produce. In our global society, these workers are making commodities to which they have no meaningful connection. Not only are the workers disconnected to the Christmas decorations from a religious and nationalistic standpoint, but additionally, they lack power in designing the decorations with any individual influence. Instead, they are under the grip of a rigid managerial, production process that limits personal creativity.

Speaking of which, workers in Yiwu are likewise alienated from the production process. As described in the article, workers labor for lengthy hours at a low wage, manufacturing Christmas ornaments by “taking polystyrene snowflakes, dipping them in a bath of glue, then putting them in a powder-coating machine until they turn red – and making 5,000 of the things every day.” These are not working conditions created by the working class. To the contrary, workers have minimized say in structuring their working conditions and to this end are alienated from what appears to be a highly oppressive production process.

Being disconnected from the objects of production and the production process also makes workers alienated from themselves. According to Marxist theory, factory laborers making Christmas decorations in Yiwu, China would become alienated from themselves at work because they are powerless in that working context, where authoritarian conditions stifle workers’ innovation and independence. Thus, work becomes a place of personal repression, as opposed to a place of personal growth.

Finally, Marx would argue that workers in China’s Yiwu factories are alienated from their broader social community, from other human beings. This couldn’t be more telling as we look at how a globalized production chain operates in contemporary society. Workers in Yiwu, China manufacturing 60% of the world’s Christmas decorations will typically have no connection whatsoever to those who purchase these decorations overseas.

Similarly, those purchasing the decorations will likely have no connection to, no sense of camaraderie with, no compassion for the workers. It is perhaps at this level where alienation is the most obvious. Those purchasing affordable holiday decorations originally made in Yiwu, China are completely alienated from exploited workers in China, and they from us.

Irrespective of one’s perspective on purchasing holiday decorations, or taking a stand on global working conditions, one can see through this example how Marx conceptualized alienation in the workplace, where proletariat members could find themselves alienated from the goods they produce, the systems of production, themselves, and the broader human community.