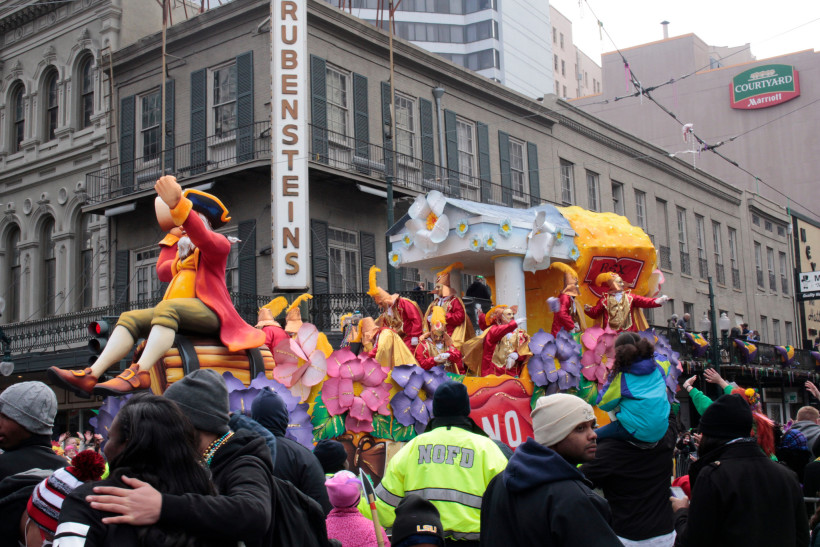 Throw Me Something, Mister! Mardi Gras and Deviance

Mardi Gras is typically a time where deviant behavior is expected and encouraged. Lewdness, public intoxication, and begging are all commonplace during this centuries-old festival. Within all societies, certain behaviors that would be considered inappropriate are allowed in some contexts. In this post, Ami Stearns examines Mardi Gras with a Durkheimian lens to suggest that deviance is relative.

Mardi Gras is serious business in Louisiana. This will be my second Mardi Gras in South Louisiana but the first that I will brave the crowds in New Orleans for a firsthand look at this over-the-top festival that has ancient roots in Western history. Many cities across the nation also celebrate Mardi Gras, and share in the typical problems that accompany the revelry, including shootings (both at people and at Centaur floats), partiers falling from rooftops, “suspicious” activity, and general mayhem.

The Situational Normality of Begging at Mardi Gras

What comes to mind first when conjuring up a Mardi Gras scene are probably the beads that are thrown en masse from passing floats- but beads are not exclusively thrown to women who bare their breasts. Beads and coins are thrown to those who beg the loudest, basically rewarding the best beggars. At the Mardi Gras parades in Lafayette (the second largest Mardi Gras celebration in the world and, most notably, fairly devoid of nudity), I noticed that the loudest people who shouted “Throw me something, mister!” received the most beads.

The “urban” Mardi Gras that is most well known demands that the revelers scream and beg for things, usually in return for nothing. But there is also a more rural version that is still practiced vibrantly in small communities all over South Louisiana. During these Mardi Gras celebrations, the members of the parade do the begging, running from house to house in tattered clothes to beg for food. The items that are collected, including live chickens, ultimately end up in a delicious gumbo.

Begging is not acceptable in everyday society, is it? Many cities criminalize begging in the form of panhandling ordinances. I was once in a restaurant where a homeless man was thrown out for coming in to ask for food (fortunately, some of these stories end in a much more positive way). It is taken for granted that, in our society, begging for food or money is only undertaken by the most desperate members of the underclass. We assume that begging is humiliating, degrading, and not acceptable. How then can we explain that in certain contexts, begging is not only okay, but expected and even celebrated?

Durkheim & The Relativity of Deviance

Mardi Gras is famous for encouraging deviant behavior. This means that behaviors considered socially unacceptable are not only acceptable at Mardi Gras, they are expected. We can view this inversion of behavior norms by thinking about classical theory, especially through Durkheim’s writings on deviance. In 1895, Durkheim, a French sociologist, penned the fascinatingly-tilted The Rules of Sociological Method. He was trying to puzzle through the enduring value of deviance. In his view, if deviance did not serve some kind of functional purpose for society, it would have ceased to exist long ago.

In Rules, Durkheim argued that the concept of deviance was actually relative. Think about that for a moment. There is no action or behavior that is in itself inherently bad. Instead, Durkheim claimed that it is society’s reaction to behaviors that make them deviant, not the behaviors themselves. As I tell my theory classes, when Tom Hanks’ character was stranded on a deserted island in the movie Cast Away, there was absolutely nothing he could do that could be considered deviant, per Durkheim, due to the lack of an audience (Wilson doesn’t count!). In a sense, we invent crime and deviance so that we can know how to act and how to fit in with the surrounding society.

I hope I’ll never be in a position where I’d have to shout at a passer-by to throw me something, or knock on someone’s door asking for food. However, over the next few days, both in New Orleans and in the rural Mardi Gras celebrations, I expect to do both and to be rewarded for this type of behavior.