“Trick-or-Treat, Smell My Feet”: How to “Do Halloween”

How do you “do Halloween?” In this post, Stephanie Medley-Rath describes the conflicting messages she received from her family, her peers, and the media about how to celebrate Halloween. 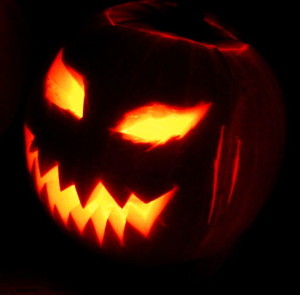 Please accept my apologies for my belated post on Halloween. You see, I don’t really know how to “do Halloween.”

It’s not my fault that I don’t know how to “do Halloween.” I blame conflicting messages from the various agents of socialization in my life. I am constantly surprised by the extent to which others decorate for the holiday and invest in costume planning. Why would people invest this much time and money in Halloween?

My ambivilance towards the holiday is challenged by the presence of my 6-year-old daughter. And Pinterest and Facebook. Thanks to the kid, I have to act like I have some idea what is expected on this holiday. Thanks to social media I’ve learned I should carve a pumpkin, do something creative with fall leaves, visit a corn maze, visit a haunted house, make a homemade costume, participate in a costume contest, and make Halloween-themed food. These are just a few of the ways in in which I have failed at doing Halloween properly. In sum, my Halloween socialization has been influenced by my parents, the Internet, movies, and my child.

Let me begin by describing the Halloween of my childhood. I grew up in the era of imaginary razor blades in apples and Halloween costumes which consisted of plastic masks and what can only be described as a decorative garbage bag. My mother with her home economics degree (yes, that is a real thing), would never dress me in one of those suffocation-hazard outfits (though I did wear the plastic masks). She handmade my costumes before Pinterest made it a thing. I have no memory of picking out a costume at a store (except maybe when I went as a black cat). One year, I went as a clown (for the umpteempth time) complete with camouflage make-up.

I keep using the word “went” as if that means something. Where did I go? I’m sure your thinking, “trick-or-treating, of course.” Well, sort of.

While my mother rocked the homemade Halloween costume, trick-or-treating was another story. My memories of trick-or-treating consist of going to the homes of only people we new (i.e., family and friends) during the middle of the afternoon (at least it was daylight). Partly this was out of geographic necessity. We lived on the edge of a small town (population of 6,000) with few neighbors. There were no kids running around the neighborhood trick-or-treating. It didn’t take long for my mom to determine that buying her way out of trick-or-treating was the way to go (i.e., bribary).

We still dressed up for school and received pounds of candy during the classroom Halloween party, so I wasn’t exactly doing without. I thought that this was more or less what Halloween was like for most kids. You go to the homes of people you knew and got some candy. Eventually, parents bribe their way out of having to go through the ordeal.

Then I became an adult and met my now-husband. I was about to experience a bit of culture shock. His parents dropped him and his siblings off into neighborhoods where they went from home to home collecting candy from strangers! I couldn’t believe that anyone actually did this! Really?! This wasn’t just something from the movies? People actually did this in real life? What about the poisoned candy?

Eventually we (my husband and daughter) moved to a neighborhood where kids were dropped off to trick-or-treat at any home with an illuminated porch. We had nonstop trick-or-treaters collecting candy. My child was too young (in my opinion) to trick-or-treat so she helped hand out candy and loved it. This year she is six. Six-year-olds are smart. They are also beginning to grasp that the way they live is not necessarily the same way that everybody else lives. She realizes that other kids trick- or-treat and wants to do it, too.

So what should I do? Well, I took my daughter trick-or-treating in our neighborhood to the homes of strangers. Remember, we just moved here and still do not know all of our neighbors. My daughter thought all of this was completely normal. I’m still not convinced that there is anything normal about knocking on the doors of strangers and requesting candy. At the same time, it was an excellent way to introduce myself to our neighbors. According to my daughter, the only thing strange was that I kept introducing myself and her at each house.

And in case you were wondering, the kid wore a store-bought costume: 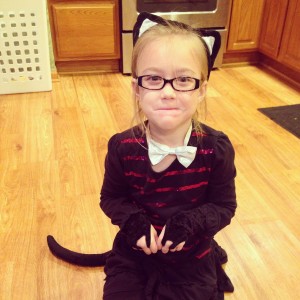