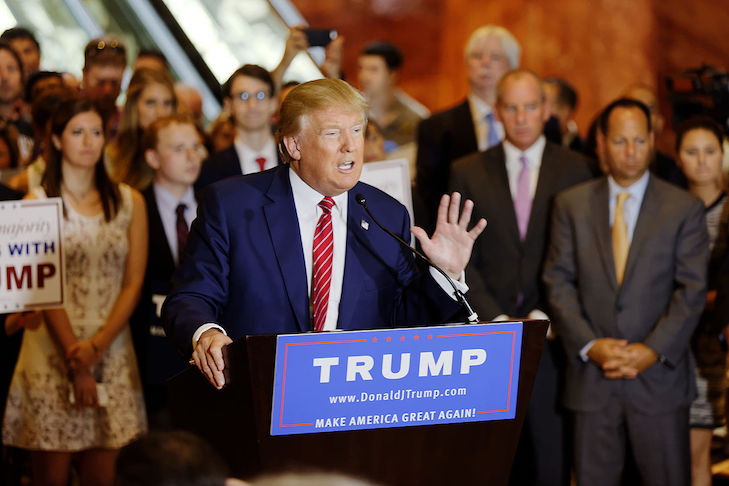 In this essay Amanda Fehlbaum uses Quinn’s concept of girl-watching to analyze Donald Trump’s vulgar remarks about grabbing women’s genitals without their consent.

If you have been paying attention to the 2016 presidential election, you have likely seen or heard the leaked 2005 “Access Hollywood” footage of Donald Trump and Billy Bush making lewd and vulgar remarks about women. Trump was on the program because he taped a cameo appearance on the daytime soap opera “Days of Our Lives.” For the majority of the video, Trump and Bush are on a bus and they are not visible; however, their comments are recorded because both were wearing microphones that were recording at the time.

According to a transcript from The New York Times, Trump talks about how he tried to sleep with “Access Hollywood” host Nancy O’Dell, and then denigrates her appearance. Bush points out the actress Arianne Zucker with whom Trump shared his scene on “Days of Our Lives.” Bush says to Trump “your girl’s hot” and notes, “The Donald has scored!” At one point, Trump describes kissing women without their consent and grabbing women by their genitals.

After Bush and Trump exit the bus, Bush encourages Zucker to give “a little hug for the Donald” and “a little hug for the Bushy.” She gives both hugs. Bush mentions that it is difficult to walk next to a man like Trump and later asks Zucker to choose whether she would rather go on a date with himself or Trump. She declines to choose and says she would take both of them.

The airing of the leaked footage has had an impact on all involved. Both O’Dell and Zucker responded by releasing statements condemning the comments and the objectification of women. Bush issued a statement, writing that he was embarrassed and ashamed and, while there is no excuse, he “was younger, less mature, and acted foolishly in playing along.” He was fired from “The Today Show.” Trump issued a statement video in which he said, “Anyone who knows me knows these words don’t reflect who I am. I said it, it was wrong, and I apologize.” He encouraged viewers to live “in the real world” and see the tape as “nothing more than a distraction from the important issues.” The comments also had an impact on the public at large. After Trump and Bush’s comments were leaked, thousands of women shared their sexual assault stories on Twitter.

The Power and Meaning of Girl-Watching

When Donald Trump and Billy Bush were on the bus in 2005, they were engaging in what sociologist Beth A Quinn calls girl-watching. Quinn (2002:387) defines girl-watching as “the act of men’s sexually evaluating women, often in the company of other men. It may take the form of a verbal or gestural message of ‘check it out,’ boasts of sexual prowess, or explicit comments about a woman’s body or imagined sexual acts.” In her study of girl-watching at the workplace, she found it to be fairly prevalent. It was trivialized as “boys will be boys” play and accepted as a commonplace activity in the company of other men. In other words, girl-watching is part of the “locker room talk.”

Quinn argues that girl-watching appears to function as a form of gendered play among men. Gendered play is a mechanism by which gendered identities, group boundaries, and power relations are produced. Thus, girl-watching is an activity that men can do among other men to bolster their masculinity and prove their manliness. According to Quinn, girl-watching operates as a power tactic and men want everyone to know that they are looking and sexually evaluating women. It is a way that heterosexual men can create intimacy among each other; however, Quinn notes that it can go too far. The men are meant to act interested, but not too interested, because acting too interested would admit that women have some sort of power over them. Men are not supposed to act like giggling schoolboys because that would undermine their masculine performance.

Notably, the target of the men’s gaze does not really matter in terms of her participation, awareness, or willingness to be objectified. The woman is a visual cue or object rather than a person. The men in Quinn’s study failed to see the harm of girl-watching and how it might constitute a hostile work environment because they did not consider the position of the targeted woman. To them, girl-watching was a harmless act and a demonstration of appreciation. It was only after Quinn asked the men to imagine themselves as women in their workplace that they considered girl-watching as something to be avoided. Quinn argues that in order for men to successfully perform masculinity, many of them are socialized to reject all things feminine, which would include accounting for a woman’s point of view. In other words, the lack of empathy men may have for the targets of girl-watching comes from masculinity demanding that men not identify with women. In order to prove that they are men, they cannot consider how they might feel if they were in the woman’s shoes and thus the target of ogling, lewd comments, or objectification.[1]

Trump and Bush got caught girl-watching and, in doing so, undermined the logic of girl-watching as simply a game that men play together. Quinn found that when caught girl-watching, the men in her study were often flustered because they were reminded that their target was an actual person, not an object. They were baffled by the women’s complaints, claiming that women are just too sensitive or that women misinterpret men’s intentions. One of Quinn’s respondents lamented, “Back in the ‘70s, [it was] all peace and love then. Now as things turn around, men can’t get away with as much as what they used to” (398).[2] Indeed, discussions about sexual assault and sexual harassment have become more widespread since the 1970s, as have efforts to curb each.

Quinn points out that if men truly did not see the harm in girl-watching or other acts of sexual harassment, then they would not be able to envision those harms – threats and potential disempowerment – when they were asked to envision themselves in women’s shoes. When they had motivation to identify with women’s experiences, the men were discomforted. Girl-watching, sexual harassment, and “locker room talk” are not about ignorance, but are about ignoring others’ humanity.