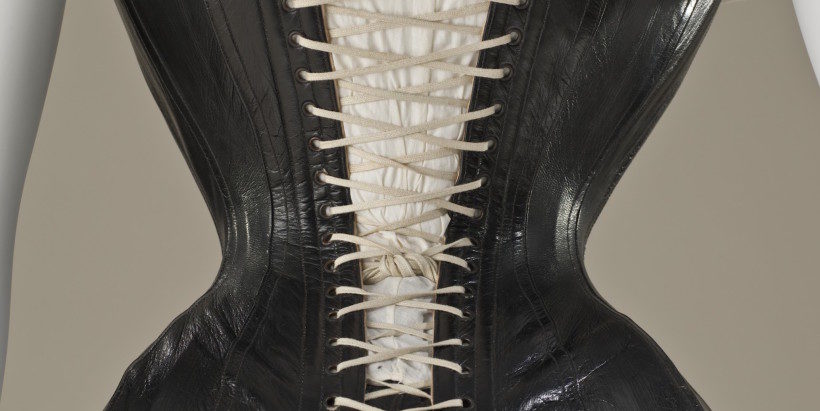 In this piece April Schueths looks at waist trainers, people who work to shrink their waists with corsets, to invite us to think about how we all modify our bodies in one way or another.

It happened again. I was on Facebook and got sucked into reading something I am not proud of: Twelve Times the Kardashians Made Us Cringe by Wearing Waist Trainers. Apparently the Kardashians have been a part of the waist training corset craze. Kim Kardashian first posted a picture of herself on Instagram in a tight corset, touting that this device can help make your waist smaller and into a feminine hourglass figure. There’s even a group of people, called tightlacers, some who wear their corsets nearly 24 hours a day. My first thoughts were pretty judgmental.

I found myself thinking that waist training seemed incredibly painful and probably dangerous. Then, I began to look at this practice with more nuance.

We all make changes to our bodies, depending on what we can afford. Do you have a body piercing? Have you ever gotten a haircut, shaved, or colored your hair? Do you or anyone you know, have a tattoo? You likely answered yes to at least one of those questions. You might not have even considered that these are all forms of body modification.

“But these are not the same as extreme forms of changing your body, like waist training or surgery,” you might be thinking. Isn’t there a difference between getting your hair colored and getting major surgery? Surgery has many risks, including infection and even death.

As I’ve discussed in a previous Sociology In Focus post, people in the U.S. spend billions of dollars on plastic surgery each year. In 2015, there were nearly 16 million elective plastic surgery procedures in the U.S. Of those, 1.7 million were surgeries, with breast augmentation, being the most common. Labiaplasty, a surgical procedure to decrease the labia, has become quite popular in recent years. Labiaplasty went from 5070 in 2013 to 8075 in 2015, a 72% increase.

It is difficult to rank the psychosocial and physical risks of different procedures. For example, how does one assess the severity of four hours of liposuction versus 30 years of rigorous exercise and restrictive dieting? These modifications aim for the same effect, but which is more extreme? Which is more dangerous? Establishing an uncontroversial hierarchy of body technologies, then, is ineffective.

Norms surrounding gender, class, race, and age influence our body modification choices. Windsor cautions us from automatically assuming that the corset craze is merely irrational and patriarchal. As Windsor points out, “Tightlacers are creating bodies that our society codes as feminine.” Instead, she, “focuses on the fact that norms, like those of gender, determine the social consequences of defying them.”

Image: Corset on Mannequin by Fæ (adapted) via Wikimedia