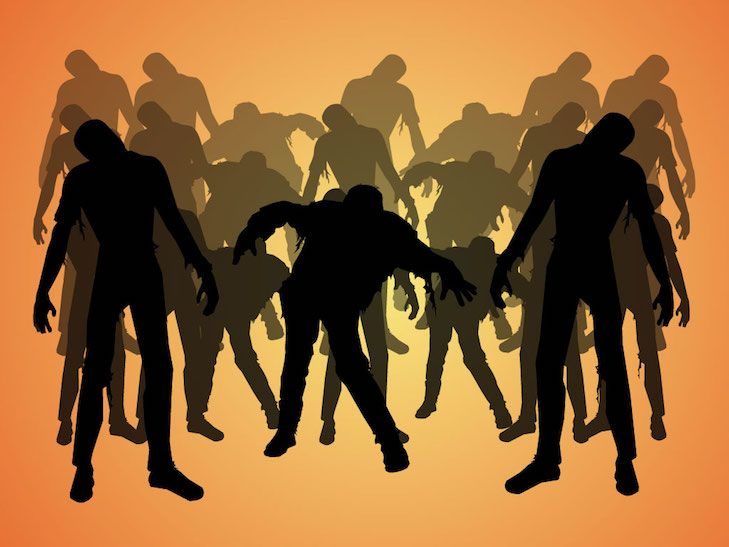 We are “The Walking Dead”: Social Contagion Theory and Collective Behavior

In celebration of Halloween and in preparation for the Season premiere of The Walking Dead, Jesse Weiss utilizes Social Contagion Theory to explain irrational group behavior. He uses the zombies as a metaphor for how frightening groups of people can be.

In July, millions of people mourned the death of horror movie icon George A. Romero. As the writer/director of some of the most seminal zombie movies of all time, including Night of the Living Dead and Dawn of the Dead, Romero helped set in motion the zombie craze that has dominated books, television and film over the last decade. Zombies have always captivated me, dating back to the days when Saturday Night Live would be followed by a syndicated series called Creature Feature. Local television networks followed the comedy of SNL with the terror of classic horror movies. It was the first place I was exposed to monsters like the Wolfman, the Creature from the Black Lagoon, and Count Dracula. It was also the first time I saw Night of the Living Dead. It was black and white, it was low budget, it was slightly cheesy, but it was so terrifying. The idea that a dead friend could come back to life with the sole purpose of slowly stalking you so as to eat your flesh was somehow more frightening than a guy who turned into a small winged mammal or a puppy dog. Of all of the movie monsters that I became familiar with on those Saturday nights, zombies stuck with me.

Zombies are very interesting monsters. They lack the intelligence of a mad scientist. They do not have the strength of Frankenstein’s monster. They are not diabolically motivated like alien invaders. Alone, a single zombie is not very threatening at all. It is mindless, clumsy, lumbering and easily confused. Zombies a can do very little damage on their own but when they get together in a groups they become very dangerous. It is this quality that the popular AMC television series The Walking Dead emphasizes exceptionally well. Once the characters of the world represented in the series get over the realization that their friends and loved ones will reanimate and try to kill them, they begin to see the zombies as only a threat when they are in a group.

What The Walking Dead does so well is exemplify the power of collective behavior. While group dynamics have always aroused the curiosity of sociologists, the study of collective behavior was really closely examined by well-known American Sociologists, Robert Park and Herbert Blumer. What many do not know, however, is that Park and Blumer were heavily influenced by the work of a French Renaissance man named Gustave Le Bon. It is Le Bon’s Social Contagion Theory of group behavior that is most represented by the Zombie genre. Le Bon believed that like a virus spreading from group member to group member, collective behavior so to spreads through a group. In these situations, individuals can be observed to behave irrationally and can sometimes engage in violent and unpredictable behavior.

This type of collective behavior has been seen very recently as celebrations turn violent and as protests evolve in chaos. Individually, the members of the group would never behave in such a way. Alone, their behavior would be benign and non-threatening, but group them together and the have the potential to become a serious threat to social control. This is exactly how survivors of whichever zombie apocalypse film, television program or book that you favor come to view the walking dead. Alone, they are slow, lumbering and easily distracted. Together, they become overwhelming, frightening and dangerous. The fact that these zombies were once humans, even loved ones, makes their turn even more profound and affecting. Each of the participants of the recent incidents of violent collective behavior is somebody’s loved one who probably behaved out of character in that group. As Le Bon explains, it is as if they have been seized by a virus that compels them to yield their own free will to the will of the group. It is as if they have become social zombies. What makes this so frightening is the same thing that makes zombies such an effective monster in entertainment … it could literally be any one of us. While most of us would like to think that we would behave differently in group settings than all of those who have smashed windows, overturned cars and much worse, the reality is that none of us is immune to contagion of collective behavior. It can be terrifying to discover what the group of survivors on The Walking Dead discovered at the end of season one, everyone has the virus and anyone can turn.