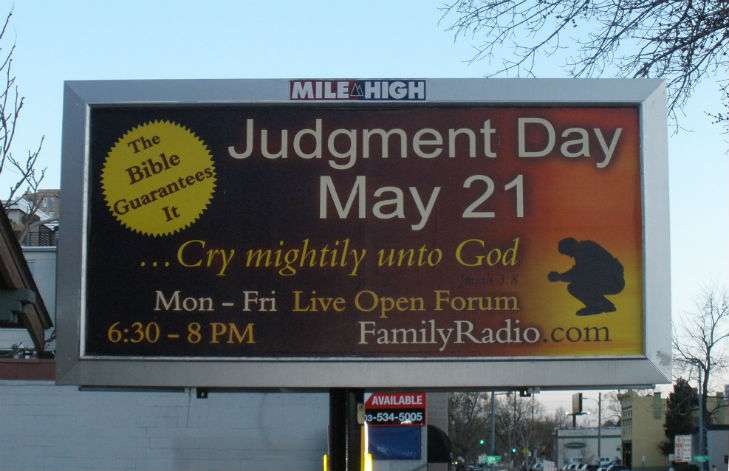 What Do Jesus & Aliens Have In Common?

“The world is coming to an end!” that is what a Christian radio host guaranteed this spring. He said massive earthquakes would bring about Judgment Day on May 21st. So what did he have to say for himself on May 22nd? In this piece, Bridget Welch explores how failed doomsday predictions can help us understand cognitive dissonance and how people respond when their deeply held beliefs are challenged – by digging their heads in the sand and trying to get you to come along for the ride.

In September of 1954, a report of an impending doomsday appeared in the news. According to the news article, the Great Lake would overflow its banks and destroy everything in its path “to form an inland sea stretching from the Arctic Circle to the Gulf of Mexico.” Further, “a cataclysm” was predicted to “submerge the West Coast” from Seattle to Chile. The source of such dire predictions was a housewife who received messages from “superior beings from a planet called Clarion.”

The housewife, known by history as Marian Keech (a pseudonym provided by Dr. Leon Festinger[1. Festinger, Leon; Henry W. Riecken and Stanley Schachter. (1956) When Prophecy Fails: A Social and Psychological Study of a Modern Group that Predicted the Destruction of the World. New York: Harper] – the lead social psychologist in the study described here), would gain many followers (dubbed “The Seekers”). To her followers she offered hope as she foretold that the aliens would evacuate the true believers from the flood zone.

The source of such dire predictions was a housewife who received messages through automatic writing from “superior beings from a planet called Clarion.”

SPOILERS!, but the Earth did not end in a deluge of water back in the 50s. Keech’s followers, however, were amazed when no flying saucer showed at the appointed time and place. Keech reported new appointments with the space craft, but each passed with no saucer in sight.

Consider it. You’ve alienated friends and family. You have quit your job and dropped out of school. Perhaps have spent your life savings… all for what? Do you think you would:

A. Figure no harm no foul and go on with your life. B. React in severe anger, possible threatening bodily harm or legal actions against Keech. C. Stay committed to Keech and proselytize to others. D. Suffer a complete loss of faith and go through a period of deep depression.

Festinger argued that when a person has social support (e.g. the other Seekers) for a deeply committed (e.g. spend all his/her money) belief, that person will respond to the disconfirming event by becoming more entrenched in his/her false beliefs! In other words, the response to the poll above for most people would actually be C. Indeed, for those Seekers who had committed to the cause, they responded with vigor – to the point that they were even more zealous in belief after the failed flood than they had before and stepped up their efforts to convert others to their cause.

Keech’s followers, however, were amazed when no saucer showed at the appointed time and place

This spring Harold Camping, a Christian radio broadcaster, predicted the world would end and proselytized that true believers would be saved. He guaranteed that judgment day would be May 21, 2011. Camping drew a great deal of media attention and a dedicated group of true believers around the world. One of the most famous followers is Robert Fitzpatrick who spent his entire life savings (around $140,000) on billboards and advertisements warning of the impending Judgment Day.

A quick look out your window should verify that Camping’s predictions did not come to pass. Camping responded to this failure by claiming that Judgment Day had actually occurred, but that it was an “invisible judgment day.” Indeed, he says the rapture will now occur this October – so beware! Taking the lesson we learned above, can you guess Fitzpatrick’s reaction after he recovered from shock?

Remember Festinger says that if a belief is shared (which Camping’s prediction drew followers across the world) AND a person is committed (with his life savings spent, Fizpatrick is undoubtedly VERY committed), then they will become even more zealous in their beliefs. In this case, reality follows theory – Fitzpatrick is still a Camping follower.

Of course, Camping lost followers[2. If you go to this link, you’ll see the transcript of a caller who believed Camping’s predictions in the 80s (which failed), in the 90s (again, failed), and then again for 2011! The caller seems to be saying that he won’t follow him to the October date, but who knows what he’ll do after he gets a chance to calm down.] with the failed prediction. Many were angry. Some threatened him physically and others with legal action. But just as he did when he predicted similar events to occur in both the 80s and the 90s, many of his followers continue to believe in him and will most likely attempt to convert others (as the Seekers did before).

In that moment, can you imagine how you would feel? Everything you had invested in, believed in, fought for, is not real.

Festinger explains this behavior by coining the idea of cognitive dissonance. Cognitive dissonance is an uncomfortable feeling that occurs when a person simultaneously holds two conflicting beliefs. For example, you may have a strong conviction that Judgment Day is going to occur on May 21st while simultaneously observing that the world did not end at the predicted time. In that moment, can you imagine how you would feel? Everything you had invested in, believed in, fought for, is not real. That pit in your stomach, that nausea – that’s the effect of cognitive dissonance.

While there are several ways to get rid of dissonance, there is really just one effective method. As Festinger says: “If more and more people can be persuaded that the system of belief is correct, then clearly it must, after all, be correct.” In other words, to stop feeling so terrible about being wrong what you need to do is get other people to join you in your inaccurate belief.

So, what do Jesus Christ and aliens from Clarion have in common? They have in common what every other belief, value, or conviction has in common. Whether it be ideas about abortion, gay marriage, health care, climate change, or a million other issues, when you share and commit to a belief, evidence to the contrary may only encourage you to become further entrenched and may create a need for you to try to convince others to believe as you do.