What Your Fridge Says about Your Social Class?

Scrolling through my Facebook feed the other day, I saw this image shared by a friend: 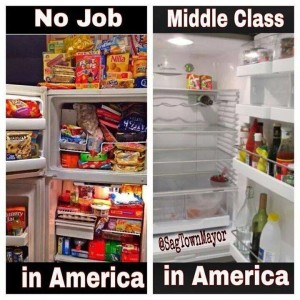 The intent of the person who created this image is to reinforce the image of the working person as going without while the unemployed person is literally getting fat off the government (as if there are no valid reasons why a person might be unemployed and in need of asssitance). The focus of today’s post, is to disucss how this image illustrates the meaning of social class in America and enables to think about research methods.

If a person believes they are middle class and they really do have an empty fridge because they can not afford the food to fill it, they probably are not actually middle class. See, in America, everybody thinks they are middle class, though that perception is declining. No one should be blamed for their own misperception. I did a quick google image search for “middle class family on TV” and the families from The Middle, The Cosby Show, Modern Family, and Roseanne all showed up. I distinctly remember an episode of Roseanne where their power was cut after not paying their bill. I don’t ever recall money problems on The Cosby Show. Can a family that can’t pay their power bill and a family that can really be in the same social class grouping?

Why do sociologists use income, education, and occupation to measure SES? Why don’t we just use the content of a person’s refrigerator to measure it or whether or not their power has been cut?

While most people immediately think of income and maybe wealth when they think about SES, research shows that education and occupation are also good markers of social class groupings and they often correspond with income based groupings. Sociologists are often forced to use education and occupation to measure social class because people really don’t like telling us how much money they make. In many ways it is taboo to discuss our income with others. In fact, some companies discourage employees from discussing salaries among coworkers. Given that we can’t talk about our income in polite conversation, we rely on status symbols (e.g. fancy cars, nice clothes, lavish vacations, etc.) to communicate to our income to others. One way to think about the picture above is, refrigerators and the contents inside it are status symbols.

If fridges are status symbols, then we should consider how sociologists might use a household’s refrigerator to measure socioeconomic status? As the photo above indicates, a researcher might begin by looking at the contents of the refrigerator. But, would the researcher stop there? What else should they consider?

The researcher should consider:

Using a refrigerator as an indicator of socioeconomic status is possible, but not with the photo above. Without additional information, one can not reach the conclusion that the person with “no job” has significantly more food than the “middle class” person.