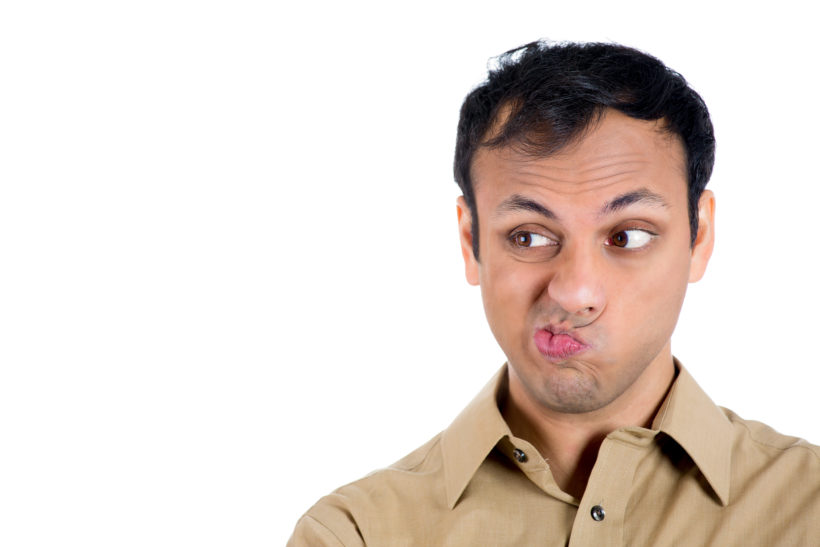 In this piece, Nathan Palmer tells us what he learned from a student who didn’t understand disproportionality.

“I knew you were wrong professor Palmer and now I can prove it!” a young man in my introduction to sociology class boasted[1]. Before I could utter a word, he flipped open a large textbook and jabbed his finger into one of the pages. He shoved the book into my hands. I spun it around and saw multiple circles of various sizes. It was a proportional bubble chart showing the proportion of prisoners from different racial ethnic groups in state and federal prison. “You see, it’s all right there. You said that the police are racist and this shows you’re wrong. What do you have to say for yourself now?”

The corners of my mouth pulled into a warm smile. When people get angry with me I tend to calm down; maybe my brain is wired wrong. I’ve also been a teacher for nearly ten years and this young man was not the first student to run up on me. As all experienced teachers know, if a student is angry about what they are learning, then at least you know they are engaging with the ideas. It’s an uncomfortable way to learn, but it can be learning none the less.

“Wait,” I said looking up from the textbook. “Take a deep breath. It’s okay. I appreciate you sharing this with me. Let’s look at it together.” I turned the book back around toward the student, “What do you think this bubble chart is showing us?” Without looking at the chart he said, “it shows us that what you said yesterday in class was wrong.” A quick laugh escaped my mouth. “Yes, I know. You’ve made that clear, but why does this chart invalidate what I said yesterday?”

“Look,” he said pointing to the bubble labeled White Americans, “yesterday you said that way more Black people are incarcerated than white people, but it says right here that Blacks are only slightly more incarcerated than whites. It’s just 3% more. That’s not a huge difference like you said it was.” He was right, the bubbles clearly showed that 36% of prisoners where Black while 33% were white. “I agree with you.” I said watching surprise then satisfaction wash across his face. “The proportion of African Americans locked up is only slightly greater than the proportion of white Americans.”

“Then why did you lie to us yesterday and call cops racist?” I put my hand out to stop him. “I have never said that cops are racist and I didn’t lie to you.” He closed the book, held it to his chest, and crossed his arms over it. “You are right,” I began, “the proportion of African Americans in prison is only slightly higher than that of whites, but to fully understand this fact we also have to consider how many people in the country as a whole come from each racial-ethnic group.” I signaled for him to come over to the classroom’s computer station. After logging in, I pulled up the Census Quick Facts webpage. 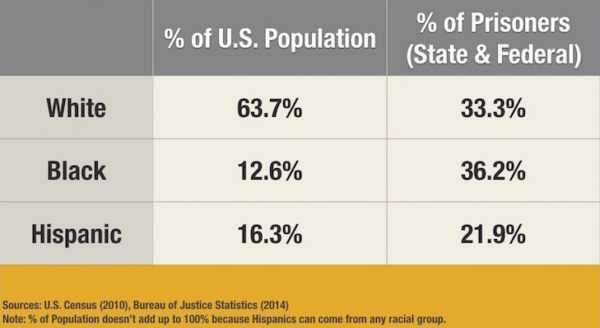 “Look here. The Census shows that whites make up 63.7% of U.S. population. African Americans comprise only 12.6% of the total population.” He threw his hand up to stop me. “Wait, where did that data come from?” Again I smiled, “Ah, now that’s a great question. Way to think critically about this! The data here comes from the U.S. Census. As far as data goes, this is one of the most reputable sources out there, but good question none the less.” Satisfied with my answer, he let me continue. 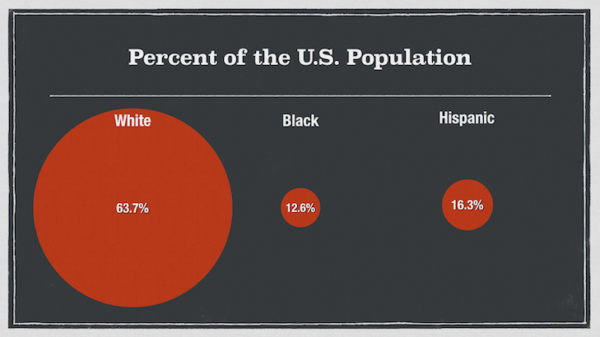 “What I said last class was that Latinos and African Americans are incarcerated at a disproportionate rate. And we can see this by comparing your chart with this chart.” I waited for a moment and he slowly nodded in cautious agreement. “If you have 12.6% of the U.S. population representing 36% of the prison population, then we can safely say that this is a disproportionate relationship.” He squinted at me and behind his eyes I could see his wheels a churning. “When we say that something is disproportionate, we are always comparing two proportions. In this case we are comparing the proportion of different racial-ethnic categories in the United States to the proportion of those same categories in prison.” He nodded. 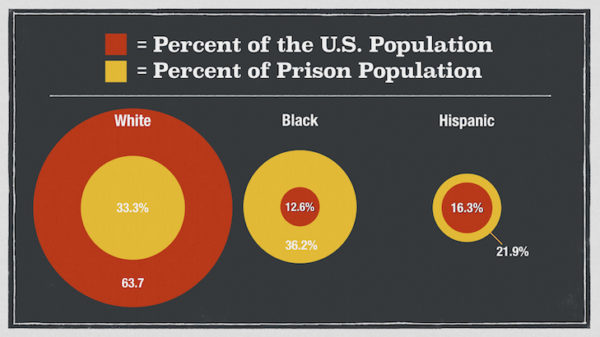 “So you are right, the proportion of whites in prison isn’t that much smaller than the proportion of African Americans in prison. However, given that white Americans are the largest group in the country, it’s remarkable that they are not also the largest group in prison.” His head continued to nod. “Thus, we can say, based on your book and the Census data here, that African Americans are disproportionately incarcerated based on their representation in the population as a whole.”

An uneasy smile emerged, “Okay. I think I get it.” My eyes popped with enthusiasm. “That’s great! I’m so glad you shared this with me. Thank you for trusting me enough to challenge what we’ve been learning about in class. I know how hard it can be to challenge your teacher.”

While I tried to play it cool in front of my student, inside I was staggered. Not by the student’s mistake, but by my own. In Soc 101 we are always talking about disproportionality, over representations, and under representations. I had assumed everyone knew what I meant. I assumed that my students and I were on the same page, but I was wrong.

Since that day, I’ve learned more about numeracy and data literacy. I’ve come to find out that conceptualizing and understanding proportions is a higher order skill and something that many adults struggle with. I can’t thank my student enough for challenging me. It’s because of that one interaction that I now teach disproportionality in my classes. Today, I am a better educator because of him.

The Stadium Wave & The Study of Social Phenomena

In this piece Nathan Palmer unpacks what sociologists mean when they say that sociology is the study of social phenomena. As the fall semest…