Why I’m Okay with Being Eaten by a Bear

Ever read a news story about a killer bear or a “man eating” shark? They almost always end with an announcement that the bear/shark was found and killed by authorities. In this post Nathan Palmer says that if he’s eaten by a bear he’d like you to let it live and then he uses the theory of the treadmill of production to illustrate how all of us are in a constant flow with nature. 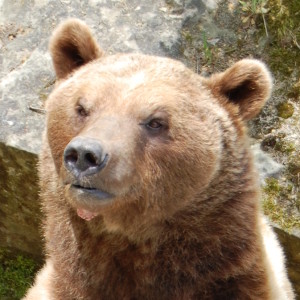 If a bear is eating me, please don’t kill it. I mean if it’s got my hand in its mouth, shoot that sucker dead, but if it’s eating my throat or brains, just let it finish. While this might sound bizarre/horrific to you, it only seems fair to me. In my years as a meat eater I’ve left a trail of dead animals so massive it would have astounded my ancestors. So with that in mind, turn about seems like fair play. Also, the idea of turning into bear poop sounds awesome to me. So… are you confused, grossed out, or disturbed yet? Give me a second to tell you about the environmental sociology theory called the Treadmill of Production and I think it will all make sense.

The Treadmill of Production theory was coined by Allan Schnaiberg in the book The Environment: From Surplus to Scarcity. The idea at the base of the theory is humans are dependent upon a constant flow of energy from nature and that each of us is in a constant state of interaction with the world around us. We are constantly taking in the natural world through food, water, air, etc. and likewise constantly releasing it back into the ecosystem (e.g. via feces, urine, exhaled breath, etc.). In this process humans create withdrawals, which are the extractions of raw materials from nature, and similarly create additions, which are the waste and by products created through the production of human consumed goods. Many additions like nuclear waste, toxic chemicals, and greenhouse gasses create profound ecological disruptions.

As Karl Marx argued over a century ago, capitalism is a profit generating machine. That is, capitalism extracts value from the land (i.e. withdrawals) and value from it’s workers (through exploitation) to create profits for capitalist. If this sounds far fetched, stop and think about everything you’ve purchased in the last week; name me one thing you consumed that wasn’t made by using natural resources?[1] Name me one thing you consumed last week that didn’t rely on cheap labor to manufacture the product or deliver the service.

The reason Schnaiberg calls our economy a treadmill is because we have designed our economy around growth. Again as Marx argued all those years ago, capitalism cannot sustain itself unless the market of goods and services is continuously expanding. For example, companies traded on the stock market are expected to create more profits for their investors then they did last fiscal quarter or they may go under. Similarly, we calculate the health of a country’s economy by it’s ability to grow profits. Put in simpler terms, for either a country or a company to sustain itself it must grow and grow and grow some more. Companies and their workers are running as fast as they can to generate profits. The faster you run this quarter (i.e. the more efficiently you generate profits), the faster you will have to run next quarter to squeeze even more profit out of the system.

To couch this in terms of withdrawals and additions, this means that our economy needs to extract evermore raw materials to create and sell evermore consumer goods. This in turn creates evermore additions in the form of wastes created during the manufacturing process and then eventual in the form of garbage when the consumer discards it. As Schnaiberg see it, humans are stuck on a cycle of consumption and destruction that may ultimately lead to collapse of the modern human world as we know it. That’s some heavy stuff, but all is not lost. We are not passive victims of our economy, but rather we are what makes up the economy and we are most certainly in control of it, but this is a topic of another post.

Back to My Body as Bear Poop

With this in mind, let’s return to the hypothetical bear feasting on my carcass. Throughout my entire life I have constantly been creating withdrawals; in fact every cell of my body is created from the natural environment I’ve consumed. From one way of looking at it, I am nothing more than a walking sack of earth. After a life of withdrawing from nature, returning my physical body to the earth to be used as food for a bear only seems fair. From the perspective of the Treadmill of Production theory, my life has been defined by my consumption and my participation in the giant growth machine we call capitalism. So if my body feeds a bear, gets turned into bear poop, fertilizes the ground, and the molecules that comprised my body get turned into new life forms, that seems a fitting end to a life built upon the constant flow and cycle of natural energy through my body.