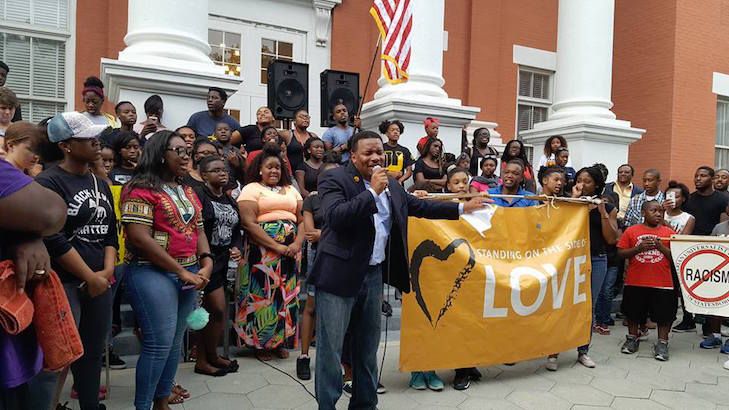 After a week of violence, Nathan Palmer explains how us-versus-them dualistic thinking both supports the ideologies of oppression and prevents us from thinking critically about violence and policing.

“So is this protest in support of the black men who died or the police killed in Dallas?” My chest tightened. I couldn’t tell if he was giving me debate-eyes. “All of the above.” A smile flashed across my face before my brain kicked in. “It’s a march for peace… and… for justice.” He turned his whole body until he was perpendicular to me and looked at the TV above his fireplace. “It’s called Silent No More. You can find out all about by searching for it on Facebook.” He gave me a nod and a polite neutral smile. “We’re protesting everyone whose life was taken and demanding justice.” A smile snuck onto the side of my mouth; That was what I was trying to say before. Walking toward me he said, ”Well that’s good. I guess." I took the cue and he shut the door behind me as I left.

I scrolled through Facebook as I walked backed to my house. My feed was a scramble of hashtags; #BlackLivesMatter, #AltonSterling, #PrayForDallas, #PhilandoCastile, #BlueLivesMatter, #AllLivesMatter. I read that former congressmen Joe Walsh tweeted:

”3 Dallas Cops killed, 7 wounded. This is now war. Watch out Obama. Watch out black lives matter punks. Real America is coming after you."

I read his tweet again hoping it’d make sense the second time. Why was the entire Black Lives Matter movement responsible for the actions of a single person (who wasn’t even a member)? Wars have sides. Why did he place President Obama and Black Lives Matter on one side and “real America” on the other? And, who the hell is real America?

As I put my phone back into my pocket, I saw a connection between my neighbor’s question, Walsh’s racist tweet, and the other social media I saw pitting #BlueLivesMatter against #BlackLivesMatter. All three were based on dualistic thinking.

You’re Either a Dualistic Thinker or You’re Not

William Perry ([1968] 1998) was an educational psychologist who studied how college students develop intellectually. He theorized that all of us begin with a dualistic mindset. Ambrose et al. (2010: 163) provided a good description of his work:

“In the earlier stages, students’ reasoning is characterized by a basic duality in which knowledge can easily be divided into right and wrong statements, with little to no room for ambiguity and shades of gray… Students at this stage of intellectual development believe that knowledge is something absolute, that it is handed down from authorities (the teacher, the text-book), and the role of the student is to receive it and give it back when asked.”

From a dualistic perspective the world is divided into antagonistic opposites. “Good guys” fight “bad guys.” You are either, “with us or against us.” The righteous battle the immoral. There is no complexity, no wiggle room, and no uncertainty. It’s all so simple. And that has to be part of it’s appeal. When the world is a scary and uncertain place, dualistic thinking allows us to believe that the world can be certain and the problems we’re facing have simple solutions.

Dualism is at the Heart of Oppression

Dualistic thinking is dangerous because every system of oppression is built on a foundation of dualism. White supremacy holds white people and everything associated with them above people of color and everything associated with people of color. White supremacists are always talking about a looming war between the races. Patriarchy and misogyny emerge from the belief that males and masculinity are superior to females and femininity. Antagonistic dualisms are at the heart of homophobia, xenophobia, religious bigotry, and prejudice and discrimination of every kind.

To challenge oppression, we must think critically about it. Critical thought requires us to be reflective about the logics behind what we believe and be honest with ourselves about what we don’t know and where our biases are. Critical thinking requires us to listen deeply to those with views that challenge our own. Right now, before another life is lost, we need everyone in this country to critically about poverty, racism, violence, and policing.

If dualism is the only lens you have to view Black Lives Matter, then I can understand why you might think the Black Lives Matter movement is creating an us versus them situation. However, Black Lives Matter isn’t saying all other lives don’t matter. Of course, everyone’s life has worth. However, it’s black lives and black men’s lives in particular that are under assault in this country. #BlackLivesMatter is a rallying cry to shake this country into consciousness. It’s a symbol that demands all of us to wake up and see what African Americans are enduring every day. Highlighting the experiences that part of our community is having, does not negate the experiences of everyone else in the community.

You can support Black Lives Matter and the police. We can grieve the deaths of Alton Sterling, Philando Castile, and the five slain police officers at the same time. You can support the police and still hold them to high standards. Fighting white supremacy is not fighting white people. Ending systemic racism is not oppressing white Americans. If any of that seems contradictory to you, then you are likely thinking dualistically.