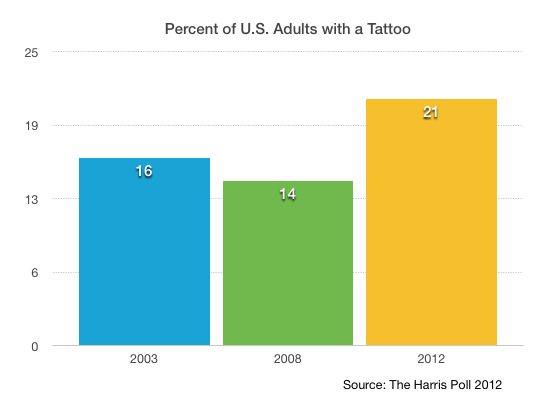 It’s Only Deviant Until Everybody’s Doing It

Tattoos are quickly become mainstream in the United States, especially for younger people. Until recently a tattoo could disqualify a person from becoming a police officer, joining the military, and many other jobs. In this post Nathan Palmer discusses tattoos as example of how individual actions can change social institutions.

I am too fickle for a tattoo. I can’t commit to an image for my phone’s lock screen, so the idea of committing one image on my body for the rest of my life blows my mind. Recent research suggests that a growing number of people do not share my aesthetic commitment issues.

One in five U.S. adults today has a tattoo. That was the main finding of a Harris Poll survey of 2,016 people published in 2012. As you can see in the chart above, the proportion of tattooed adults has been steadily rising over the last twelve years. Given that people under the age of forty were more likely to report having a tattoo, there is reason to expect this trend to continue to grow over time.

Not too long ago tattoos were associated with gangs, bikers, and prisons (DeMello 2000). However, that stereotype is fading and today tattoos are associated with reality television shows, celebrities, and the art world. As more people get inked and old stereotypes fade, many of our social institutions are being forced to adjust.

Tattoos, until very recently, disqualified an applicant for many jobs, but as the pool of job applicants fills with ink, some employers have adjusted their stance. In April the U.S. Army changed its policy on tattoos, removing previous limits on the size and number of tattoos a soldier was allowed. Around the country in places like Seattle, New Orleans, Manchester, NH, and Tarpon Springs, FL police departments are also relaxing their polices to allow the tattooed to protect and serve. At the same time however, the Army still bans face, neck, and hand tattoos and many police departments still have policies against tattoos (especially for ones that are visible while in uniform).

How Individual Acts Can Change Society

The shifting landscape around tattoos is a good demonstration of how individual acts can change social norms. First a quick refresher on norms. Every society has cultural values that tell us how things ought to be. Cultural values tend to be abstract concepts, but they are refined into specific rules of behavior that are called social norms. Any act that violates a social norm is considered deviant and is likely to receive a sanction (i.e. formal or informal punishments). For example, in many societies honesty is a cultural value and there is a social norm against lying. People caught in a lie often are shamed and punished.

Cultural values and social norms represent what sociologists call a social structure because no single person is able to control them. Social structures organize society by using social institutions to promote some behaviors and discourage others. In the case of tattoos, social institutions like the economy and the government use their hiring policies to limit an individual’s agency (i.e. their ability to do what they please). Social structure, then is how the group controls the individual. But this is only half the story.

Social structures influence individuals, but individuals can also influence them right back. If enough individuals do something despite it going against a current social norm, then their actions may become the new norm. For instance pants used to be viewed as men’s clothing and it was deviant for women to wear them, but over time this norm has faded into obscurity. Individuals have agency; we can go against the flow and if enough of us do so, eventually we change the direction of the flow.

Only time will tell if tattoos become the new norm. However, as more individuals embrace tattoos and our social institutions relax their polices against them, the stage is set for tattoos to lose their deviant status.

Author’s Note: Thanks to Dr. Chris Uggen for the tweets that inspired this article.